Thanks to Glyn, Robert and Bill (whose sigh of relief was heard across the Atlantic) my system seems to be up and running. However, my feeling is that the power calibration is not correct for power1-4 which I am using.

I have adjusted the scale factor for Vrms (emonhub.conf) so that my emon input reads the same as my mains (Fluke 87 III). I have a 9v AC/AC adapter purchased in the US.

On power1 &2 I have two SCT023Rs connected to the mains so I can read each plus a sum of the two feeds
On power 3 &4 I have two SCT-013-000s which read from individual breakers.

Is there a way to calibrate the system without having to go into the emonTX where things have to be edited and recompiled? Can it be done by software configuration in the RPI3 + RFM69Pi_433? I’m not looking for extreme precision but something fairly accurate and easy for a layman to modify.

Thanks in advance.
Bob

Thanks to Glyn, Robert and Bill (whose sigh of relief was heard across the Atlantic)

Robert and Glyn maybe, but I’m in the US.

You can alter the power that emonHub passed on to emonCMS, emonhub.conf is the easy place to tweak. But if it’s out by a factor of two, it sounds as if there’s something seriously wrong, because your SCT023R should have the same connections and calibration as the SCT-013-000.

I have adjusted the scale factor for Vrms

What did you change it from and to?

You can change the numbers in scales = ... for the powers in exactly the same way as you did for the voltage.

As best I can remember, the dip switches were set for the US when I received the unit.
My STC023Rs were marked 200A:50ma. Is it possible they are different from those marked 100A:50ma? In other words, they are putting out about half of what I was expecting?

If they are marked 200 A : 50 mA, then I would rely on that for the ratio. My data sheet (from YHDC) only mentions the 100 A version, and YHDC appear to be no longer on the Web (The Great Firewall of China?). So reliable data could be hard to come by.

So yes, your power calibration starting values should be 2× the number you first thought of!
scales = 2,2,2,1,0.01, ...
with minor adjustments for tolerances - and of course you’ve already adjusted the 0.01 value for voltage, plus I’m assuming you’re not using a 200 A c.t. on the high sensitivity channel no.4.

(whose premature sigh of relief was heard across the Atlantic)

Thanks, Robert, I think that fixed it. Anyway, By doubling the scales for power1 & 2,the input values from the SCT023Rs have doubled so I’ll check again with the Fluke a little later to compare readings. The specs on the 200A version of the SCT023R show a ratio of 4000:1 so this is double that of the 100A version to produce 50mA. The yhdc site is very slow but I got it with this:
http://en.yhdc.com/product1311.html?productId=424

From your earlier post, I didn’t completely answer your question about my change in the Vrms scale.
With the US transformer, my Vrms input was reading about 11 volts lower than what the Fluke indicated. Doing the math(s), I calculated the scale should be changed from 0.01 to 0.01103. When measured again, the Vrms input was within 0.1 volt of the Fluke reading.

Many thanks again!
Bob

Although as Robert said it’s not the conventional way to specify a CT,
you left out one piece of info that is on their website. (plus you had the ratio values reversed)

The web page says the CT has a turns ratio of 1:4000 (in addition to two other available ratios) 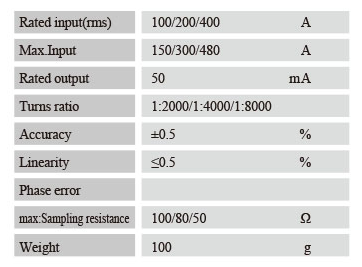 Sorry, Bill, thanks for the correction. Bob