I have had solar fitted since 2014, the old meter was changed 2015 for digital.Since then for some reason my exporting is not being recognised by there meter,Its lumping it all together as import .I raised the issue and they recently changed me to a new digital + smart meter still the same issue(plus it does not register on the monitor in the house).I believe when your consumption is less than your generation the meter should say RED detected.(not happening)

So how do I prove to British gas with emonpi that I am not using 20 Kws a day.
The Pic shows isolation switch on left with
CT 2 connected to solar generation
CT 1 connected to incoming grid
sorry regular joe looked at a lot of forum and faq flew straight over my head electric charges currently £150 a month for 3 bed semi aaargh
Thanks in advance 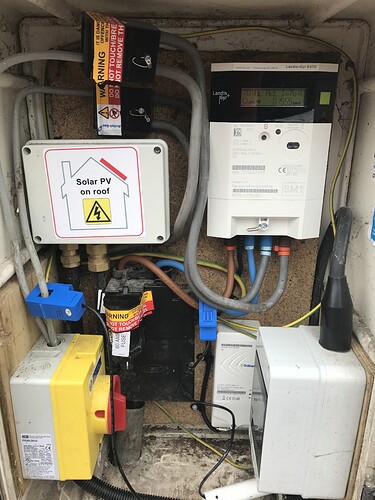 It would appear that your meter has been set up to NOT conform to the industry guidelines.
Here’s the document https://www.meteroperators.org.uk/images/FAQ_and_Stakeholder_Info/Reverse_running_meters_20130820.pdf
And quoting from it:

It should be recognised that when a meter was first installed, conditions at that time would likely to have been “Appropriate” (per the Electricity Act) for the design of meter. But when circumstances have changed, (e.g. export now possible) a meter can become “Inappropriate”, and therefore will need to be changed. There are no circumstances where the ‘import’ meter is intended to rotate backwards, reducing the import register, nor is the meter intended to add any exported energy to the import register. The financial design of the Feed in Tariffs (FiTs) for microgeneration were developed on the basis that the import meter records all import energy and does not run backwards when the microgeneration is causing a net export. The exported energy is either ‘deemed’ or explicitly measured using an ‘export’ meter.

You could try asking the MOA, or I suspect OFGEM might be interested if BG don’t acknowledge their error.

CT1 should show you the nett import and export.
Under Setup, on the inputs page, look at the input for CT1, probably called Power1. If you click on the spanner, you’ll get the config page. What you need to do there is add “processes” to do this:

When you’ve set that up, look at the Feeds page and you should see all the new feeds that you’ve added. You can then make a Dashboard and display the numbers. This System Overview - Guide | OpenEnergyMonitor
is the starting point for that.

It’s possible, but not very easy, to put cost information in, so I suggest you keep a paper record of the three significant values - the Nett, Import and Export Energies - and compare those with your not-so-smart official meter.

thanks mr wall
I think there is something a miss with my ct clamps just clocked the solar generation and import are exactly the same. 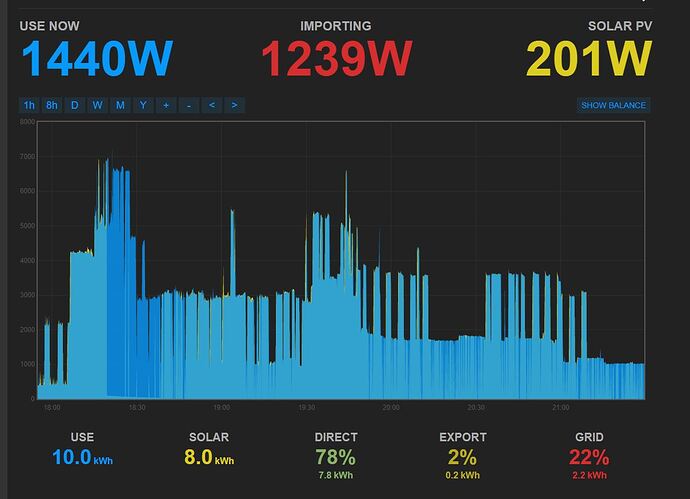 sorry yes it should have read KWhs
thanks again

I can’t see exactly where every cable goes, but it looks to me as if the c.t’s are in the right places. The one on the right definitely appears to be on the main grid connection (and upstream of the meter), and looks as if the left-hand is definitely on the PV infeed. It does appear to be on the neutral, but that shouldn’t matter as long as it points in the correct direction.

I take it you have an a.c. adapter on your Pi so that you know the direction of power flow? If you have, and the c.t’s point the right way, the PV channel should read large and positive when you are generating, and probably a small negative value (a few watts or low tens) overnight. The Grid c.t. should read positive when importing (i.e. at night) and negative when generation exceeds use and you are exporting. When you do that, power1+power2 will show your nett consumption.

You need to get this right, otherwise your display and records will not be meaningful.

out of curiosity- in Canada we have newer digital meter too as soon as I installed my windgen and solar panels they swap me out from the older wheel type, - but they always only count forward. they can detect the power direction ( ie top right hand bar counter - the direction it moving to the left or the right) they just want two meter on to detect your total consumption and a second one for your energy creation - then they just subtract one from the other to determine your usage – the reason they do this is because people try to cheat the meter by inverting them if there only one meter. just wonder if maybe you need the same second meter even though it seams that you do not…

We do it slightly differently to that in the UK - the Meter Operators Association document actually describes the system: You pay for imported energy, not nett energy. You then, quite separately, get paid a Feed-In Tariff based on the energy you generate - whether you use it or export it makes no difference. Hence the popularity of Calypso_rae’s energy diverter, which means you use more of your own generated energy, and import less. Hence you pay less, but get the same FIT payment.

And in the UK, meters do not plug in, so they cannot be pulled out and turned upside down, as they can in the USA. So it’s not possible to defraud the supplier in that way.

From what the other Stephen says, his meter is not doing what is required of it:

nor is the meter intended to add any exported energy to the import register.

so not only is he paying to export energy, but he’s paying at a higher rate that he is being paid to generate it.

This looks like a Type 1 solar installation. emoncms will only automatically work if you connect the clamps according to following picture: 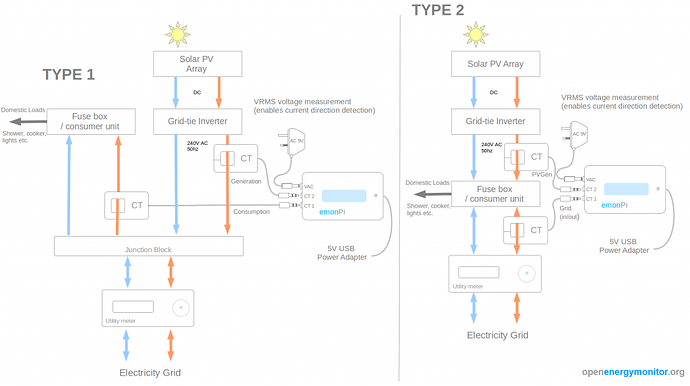 So either you need to reconnect or make modifications in software to read correct values. 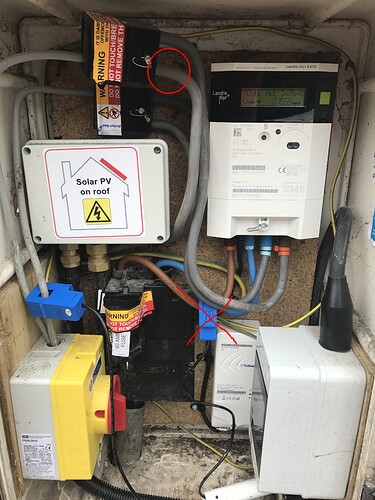 I can’t see how what you quoted is inconsistent with this installation. I checked an installation manual and the wiring appears correct. The E470 is playing the role of the import meter here (also a smart meter probably although likely a SMETS1 version judging by what I can see of communications hub below).

My question would be: where is the generation meter? And is it possible that the meter that was replaced with the E470 was an old type which rolled back so that OP originally thought they were using a lot less than they actually were using due to presence of PV?

Also, good to be aware that smart meters like the E470 here do have export measurement capability and they will combine functionality of the FiTs and export meter in future.

I knew absolutely nothing about energy monitoring so from getting the emonpi on the 15th Aug 2017.I have read and followed along with video tutorials.I made what you would call a school boy error and hadn’t logged VRMS as feed.
Logged the feed everything is as it should be
Thanks for your help everybody now gonna claim my hard earned readies back from BG