I’ve just received a brand new EmonBase and couldn’t work out why it wasn’t connecting to wifi or ethernet.

I’ve just bought a cable, plugged into a monitor and am getting this error:
“You are in emergency mode.”

Is there anything I can do from here? Or do I need to get an SD adapter and reformat the card?

Hello Chris, sorry to hear this. How is the emonBase powered? is it plugged into the emonVs or a separate power supply elsewhere? I wonder if there’s a power issue causing it to not startup properly?

I had it plugged into the emonVs earlier but have got it in the office now with a 2.5A USB plug.

@TrystanLea Ive tried a couple of other power supplies with no success. 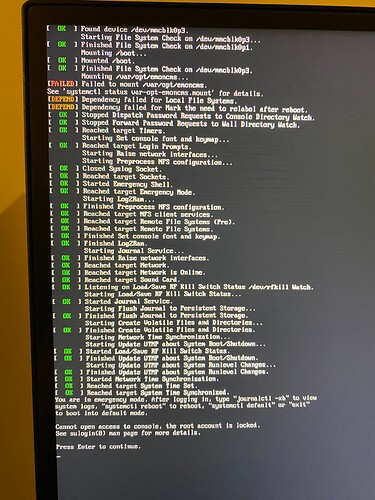 Thanks @abbbbbottttt good to know it’s not the power supply. Looks like an issue there with the /var/opt/emoncms partition that holds the emoncms data. I haven’t seen that before at this point with the new image so I think it’s probably best that we either send you a new SD card or if you want to get it up and running faster, I’d suggest uploading the emonSD-10Nov22 image from here: https://docs.openenergymonitor.org/emonsd/download.html.

It might be possible to fix it by running via command line:

but I might be inclined to just write a new image as Id be worried about other issues that we are not seeing yet.

Thanks, I’ve just realised we’ve got a NUC with a microSD slot so can give that a go.

There is a high probability you did not wait long enough from first boot.

It does take quite a while, and you do start to think it has failed. Power it on, make a cuppa, do some other jobs and then come back. It will have probably finished all it’s bits by then!

I’ve had some degree of success now in that I was able to write an image to the SD card. However Etcher complained that the emonSD-10Nov22 image was too big for the supplied card and wouldn’t let me use it.

I grabbed the previous image from the list and it was fine.

Is there any drawback to this alongside a Full Update, or is it worth trying to get that latest image sorted?

Very much appreciate your help.

Is there any drawback to this alongside a Full Update, or is it worth trying to get that latest image sorted?

It’s the 16GB Sandisk Industrial that was supplied with the unit.

Why is the image tailored to a specific size of SD Card? A while ago, I succeeded in shrinking the emonSD-210721 image so that it wrote to an 8 GB SD, then expanded it to fill the card. But shrinking the image in the first place was extremely tedious, compared to a couple of keystrokes in GParted once the shrunk image was on the SD card.

Some info on emergency mode:

Stuck in emergency mode and nothing works?

Welcome to Emergency mode in Linux - Boot error generally occurs after an emergency power outage on a server, a system crash, or similar situations.

The second article mentions:
However, in 90% of cases, the error relates to fstab or Linux file system damage

That being said, if it’s file system damage, recovery may or may not be possible.
If it’s a problem with fstab, that’s easily fixed.
Given that others who’ve started using the Tx4 haven’t had any problems like this one,
it sounds as if the file system has been corrupted.

Thanks, @Bill.Thomson, I’m going to assume corrupted and try to get the image rewritten.

The bit that’s confusing me most is that it won’t fit on the card that came with the unit???

I did post the procedure - a search found it.

Because of SD Card failures due to repeated writes to the card, Trystan & Glyn determined that changing the partition format (type) made a significant difference to the life of the cards. To do this, a specific data partition was introduced. I modified the init process of the default RPi image so that the expanding of the partitions still happened on the back of the in-built process to do that.

RPiOS has changed that mechanism and Trystan has been modifying the sizes manually (I think).

This latest iteration, the OS takes up more of the root partition than before. I asked if the boot partition could be enlarged slightly to accommodate a future install of esphome. I think this may have caused the issue.

Ideally, we will try and piggyback onto the resize process that the PiOS image normally does on first boot.

It’s the 16GB Sandisk Industrial that was supplied with the unit.

What colour is the SD card. As far as Im aware all of our SD cards are now 32GB and so if you have a 16GB card it means we’ve sent you one in error… and we will send you a replacement. 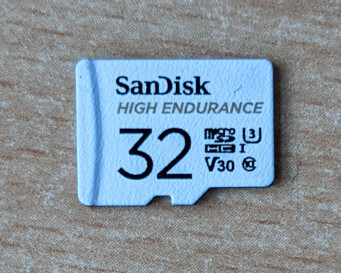 @TrystanLea - I’m travelling for work today but it’s definitely not that one. It’s 16GB and I think it has Industrial written on it.

Ok my apologies, I will get the correct one in the post to you today.