Hi guys,
We decided to get our emonPi after some incredibly large electricity bills. So I’ve a few questions that I’m struggling to find online.

We have a fairly large 4 bedroom house with the usual appliances (plus a few raspberry pi’s etc). When we moved into the house the electric tariff and meter was on economy 7, when we did a meter reading the meter flashes 1 and 2 readings, they get added together for our electricity usage. We have changed tariff’s so now they charge us a flat rate of 12p a Kwh.
I’m not sure what an average house consumption per month is but we’re currently using 1000 KW in the winter and around 600 KW in the summer, last year was 10,120 kwh (according to our supplier)

When I first installed my emonPi I used just one of the CT clips and everything seemed to work ok but then when we compared this to our bill it was only half of what our energy company said we’re using, so I added the spare CT clip to the other cable (as we have 2 cables in the meter and 2 cables out) but now we’re using 1100kwh? and according to emonpi my kettle uses 6000w? 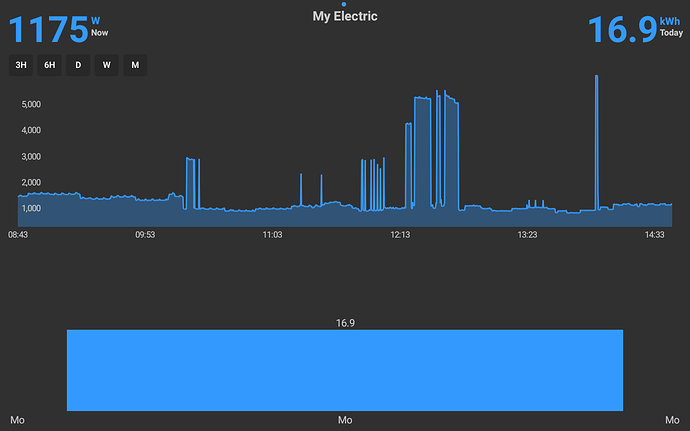 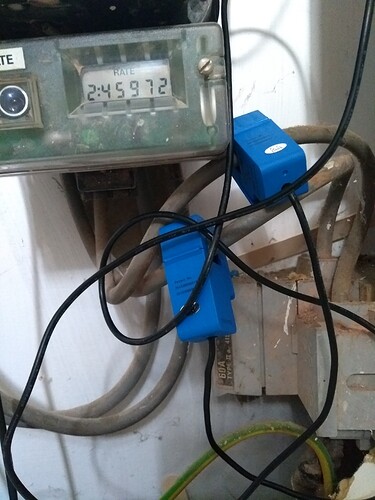 b - should i be using 2 CT clips and adding them together for my power consumption? as i’m currently doing?

It looks very much like you have one c.t. on the line, and one c.t. on the neutral, so you are measuring the current once on the way in and again on the way out, and as you suspect, your 3 kW kettle is reading 6 kW! So the answer to your final question is a resounding NO.

This The Average Gas & Electricity Usage in the UK - Smarter Business says 3 - 4.5 MWh per annum for “average” consumption.

I think you need to look at only one c.t., and check the emonPi’s readings against the meter, and try to work out what the meter is actually doing. It may well be that the electricity company is using both readings when only one should be used.

Thanks for pointing me in the right direction. I’ve tried a few different configurations to get close to what we’re being charged for, and now I’m back to the beginning again. I think you’re right about being wrongly charged for the second reading as we don’t have any heating or hot water attached to eco7 and I read somewhere today that if the meter gets changed from eco7 to normal then the electrician will block the second reading with tape or make a note somewhere, I dont think that information was passed on to us when we purchased the house.

Once I get my head around it all I’ve been asked to set one up in the school I work for, that’ll be fun.

With my previous E7 meter when not on an E7 tariff you just reported both values and you were billed the delta of the two readings. I am not sure what taping over readings would do as your consumption overnight will still continue and still need to be measured.

One other thing to do is to get a pulse counter and stick that on your meter so you can see if, approximately, the power usage the meter is logging is at the same time of day as your CT based measurements.

// Did post blank graph, but removed while I go get a proper one.

My bad (on the graph) - I had smart meter installed and completely missed the change from 1,000 to 3,200 pulses per kWh - so please ignore the scale issues - the idea in your set-up would be it’s accurate and the “shape” over longer periods is the same: 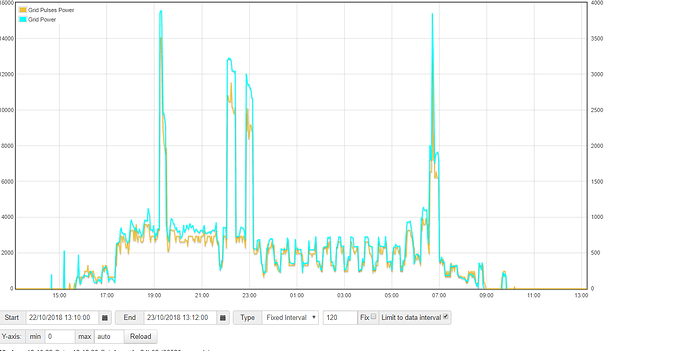 Cheers for the info Peter, I’m actually just starting to compare the meter readings to my emonpi readings and they seem to match so far…as I said last year we used 10.000kw and an average 4-5 bed house uses half that so it’s a bit of a mystery why ours is so high? Our house was installed with a c-bus lighting system and is completly automated but we’ve just discovered that the system uses 100w without even turning a light on!! And they claim to be eco friendly.

Anymore info to help a beginner will be much appreciated.

Also Ive checked out the pulse meter and does it rely on a led flash from the meter or does it actually record the ‘pulse’ inside? I have a very old meter that has a small digital reader clamped at the bottom.

Take a look at the table of typical meters on this page: + Add Optical Pulse Sensor - Guide | OpenEnergyMonitor

The pulse LED just flashes every Nth watt consumed - as I said, my E7 was 1 flash per Wh (1,000 per kWh) while the new one is 3,200/kWh. On the E7 meter it went solid on when solar was exporting (and the display said “RED” - Reverse Energy Detected)

Your background use looks quite high. I’ve got loads of techy bits and my background is about 500W (which I think is high).

Switch off circuit breakers one at a time (obviously checking to see if there is anything ‘necessary’ like the wifi router…) and see how the instant use changes. It has happened before that a Fridge or freezer is on it’s way out so is running continuously but you do not notice.

How do you heat?

On top of the measuring, I record every meter reading so I can see my annualised use Year on Year.

Cheers Brian,
Our previous owners installed a £8k c-bus lighting system, we’ve worked out that is uses 100w without turning a light on as it’s a dimmer system and ‘leaks energy’. We have wet underfloor heating throughout and a storage tank in the loft but that is inverted and is mainly heated by the combi. I’ve already done exactly what you suggested and turned everything off and logged each device’s output. Nothing really stands out apart from the usual suspects ie toaster, coffee machine, kettle etc etc. We’re averaging around 10kwh a day. It’ll be interesting to see what happens through winter but we still won’t be using 10.000kwh a year??

We have wet underfloor heating throughout and a storage tank in the loft but that is inverted and is mainly heated by the combi.

I have exactly the same setup. Is the combi close to the boiler? Does the tank have any temperature pockets?

In my last house (also with same setup but smaller tank) I discovered the main issue was with the boiler startup. The boiler effectively dumped a load of cold water into the hot tank as it started up. If you fit a dump/blending valve close to the tank, it circulates the water in the pipes until the boiler return it hot enough to go into the tank. Made a huge difference.

[edit] I also discovered with the current tank, that I was heating it up too much - only really appreciated both things once I was measuring the temperatures down the tank.
[\edit]

I’d be more interested in what is contributing to the background value that is around 1000W - that seems high even allowing for the 100w C-Bus system. Think of all the things always on (me - 4 bed, 2 x teenagers; Always on or standby - TVs, games consoles, Sky boxes, MHRV, small server, 2 x router, network switch UPS, NAS, PC, 2x Rpi; Regularly on - Fridge, Freezer, wine fridge, boiler, CH pump). It quickly adds up.

This is all very interesting and very new to me. For 2 years we were paying our duel fuel energy bills via direct debit and not really thinking about it, but now we’re digging around its opened a can of worms. What’s your daily electric usage? If you don’t mind me asking…

I’ve recorded monthly meter readings since 2013 so have a pretty good idea what I use! Some of the house is heated by electric so I’m not typical but I’ve used about 8,000kWh over the last year (in a very, very well insulated and air-tight house). Since we stopped heating, it has been an average of 16kWh per day (on meter readings).

Key difference I suggest is background. Here you see Kettle and Dishwasher and a chunk of the background is my MVHR system (needed as the house is basically air-tight).

You have got to keep up with the comparisons for fuel. I could easily be paying £300 per year more. I don’t trust the actual figure given so always calculate the projected cost using a spreadsheet.

It is interesting, but despite the headline that energy has gone up, actually my cost per kWh (on an annualised basis of dual fuel) is about the same as 2015 (going up though). 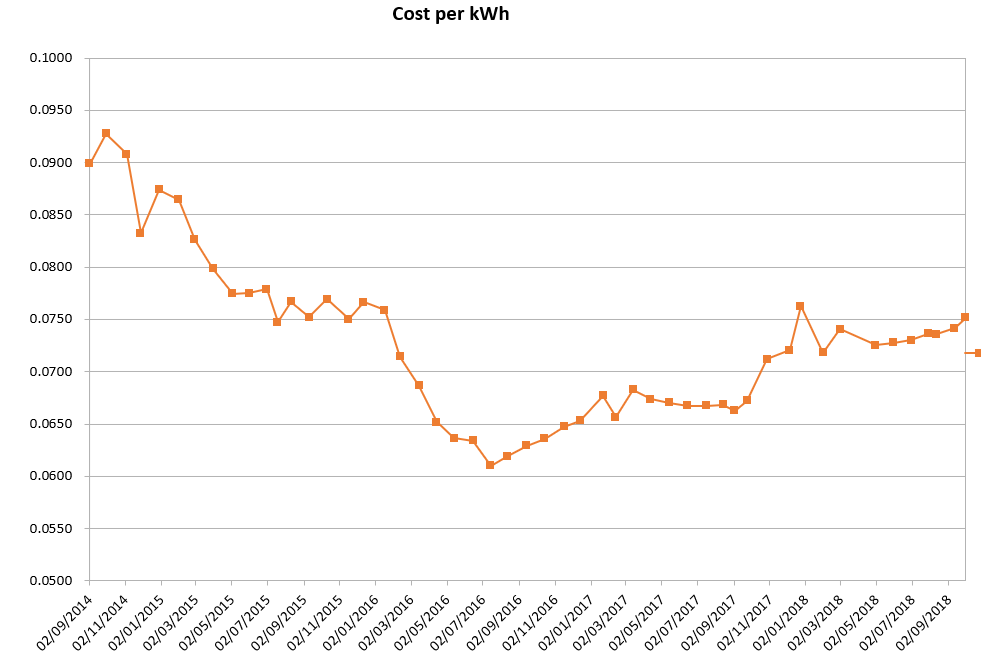 Key difference is the standing charge - this has risen from 6p (low point) to 16p in that time! Before that it was 20p. It is a stupid charge and impact low users more than high use. In fact, the more you use the less you pay per kWh.

[edit2]
Last chart - this is my use last 12 months * what I am paying now going forward… Not pretty. 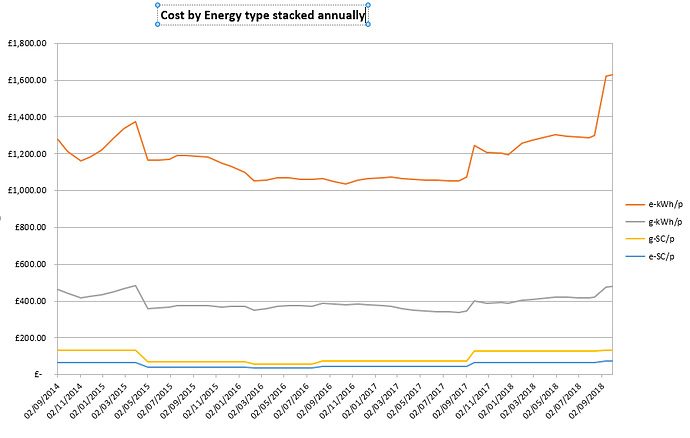 Your usage does sound high; higher than us who have fish tank, pond pump/filter, 3 fridges and 3 freezers & numerous electronics giving us a background consumption that rarely goes below 500w and we average mid-20s in kWh per day.

I would advise you to get all your actual readings for each register for as long as possible, plot them on a time series chart and make sure the lines are relatively straight. If any big jumps there may have been an incorrect reading which you are paying for now. That’s easily done, was done by a meter reader on my sons account, they entered the 2nd register & the total register so he was double-billed for his night-time consumption.

I see you have been advised on getting your emonpi recording correctly above. Also above is a great idea to flip the circuit breakers to see if you can isolate any cause of high consumption.

I would add to the thing about the combi feeding the tank that we have a “combi save” which is a plumbed-in mechanical valve that restricts the flow of water until it reaches a decent temperature.

Thanks for the insight. Turned out that my energy company was ‘accidentally’ charging me nearly 3x my normal tariff. I suppose the good thing about OEM is that it makes me analyze and monitor my energy usage in general that i didn’t do before. Thanks for your help.

my energy company was ‘accidentally’ charging me nearly 3x my normal tariff.

They are of course recalculating and sending you a refund?

Hopefully, your OEM kit has paid for itself.

They owe us just over £1k, I wonder how many people just pay it direct debit and don’t even check. 50%?