Any thoughts on a Harvi-like device to fit in the eco-system?

The harvi attracts my attention because it’s sole role is to measure the flow of electricity and this then tells the eddi and zappi what to do.

One thing I like about the harvi (which can monitor 3 circuits/phases) is that is communicates wirelessly , and without a battery. Yep, it does some kind of current harvesting from the CT clamp, looks as though it stores it in a capacitor and then use LoRa for transmission. 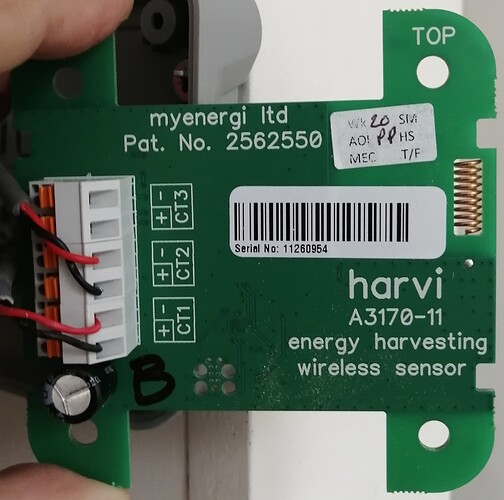 Would anyone find joy in having a look at the main circuit part ? (hopefully the photo is enough to have a rough idea of what’s going on) 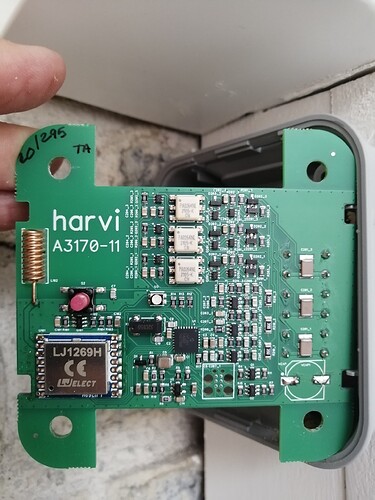 If that image is squished in the upload the original can be seen here https://photos.app.goo.gl/w5xTuf5GBGmb6V5NA

I wonder if there might be an alternative emonpi configuration where the monitoring is separate to the brains of the operation, ie. the pi part of the system could be in a busy area of the household and could then have other accessories attached , like a screen , large flashing lights etc…

The very sketchy datasheet for the harvi is available here

All the best / Colm

It would definitely be cool if it could be done, would save people having to necessarily run cables, but be aware it is patented, so could be “fun”…

Energy harvesting has been used on grid infra for quite some time. I mean those LTC3588 piezo things were available in 2012 and plenty of other companies do wireless energy harvesting CTs.

The harvi looks quite similar to a TI reference design for CT harvesting with a super cap which predates their patent.

In practice the harvi and other similar devices like from pressac update relatively slowly, 15-30 seconds per reading so limits their usefulness.

In practice the harvi and other similar devices like from pressac update relatively slowly, 15-30 seconds per reading so limits their usefulness.

Agree. To make an effective solar diverter you need a data update of several times a second. At 15-30 seconds you are going loose a lot of energy to the grid or import a lot to keep your immersion running until the meter updates.

To make an effective solar diverter you need a data update of several times a second.

Especially if you have an induction hob or something like that, which can change state every few seconds. I believe Robin’s Mk2 PV Router responds on the second mains cycle following the change.

Am I missing something? The EmonTX is the Harvi.
It monitors the data every 10 seconds, then reports it to the EmonPi.
The EmonPi can publish* it to MQTT, subscribed by NodeRed, which can then ‘do stuff’.
In my case, turn on the hot water diversion, tell the car charger what to do (the smarts are in NodeRed), run pumps, charge the house battery, send alerts that there’s spare power, etc.

I think the o.p. meant one that’s totally wire-free – something that doesn’t require a battery or mains for its operating power.

Here’s an open-source energy harvesting design using the RFM69, there are significant challenges, but it would be an interesting project.