First of all hi! I was directed here from github where I raised some suggestions on the official android app. I have my own pi/arduino based UFH control system I wanted to monitor and control from an android app.

I write to a demand feed on emoncms.org which is picked up by my UFH controller, checked and used as an UFH target temp.

I have written an app to write to this demand as well as read my public feeds back to the app. I have made it generic so you have to enter the required info for the app to work. Account ID, API key etc. There is a chart which currently allows you to specify a single feed to render which it gives about the last 6 hours from.

The code is on github: https://github.com/tombarks/UFHControl. I’ve not really done much android dev, nor used github really so please be gentle. Certainly not sure how it will render on anything other than a Nexus 6P!

Edit: Just to be clear I don’t intend to develop this app any further, I just wanted it to do some things the emoncms app don’t currently do. Maybe the source code will be useful (probably not) or the app useful to someone else until this kind of thing can be done with the emoncms app. 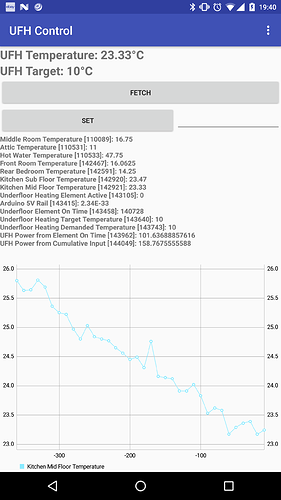