What difference does it make whether I make adjustments in EmonHub or emontx3’s sketch?
I have already adjust Vrms in the EmonHub.

There are no engines in the household, and hence no phase shift effect. The individual loads are made individually on different single phases (DENMARK). 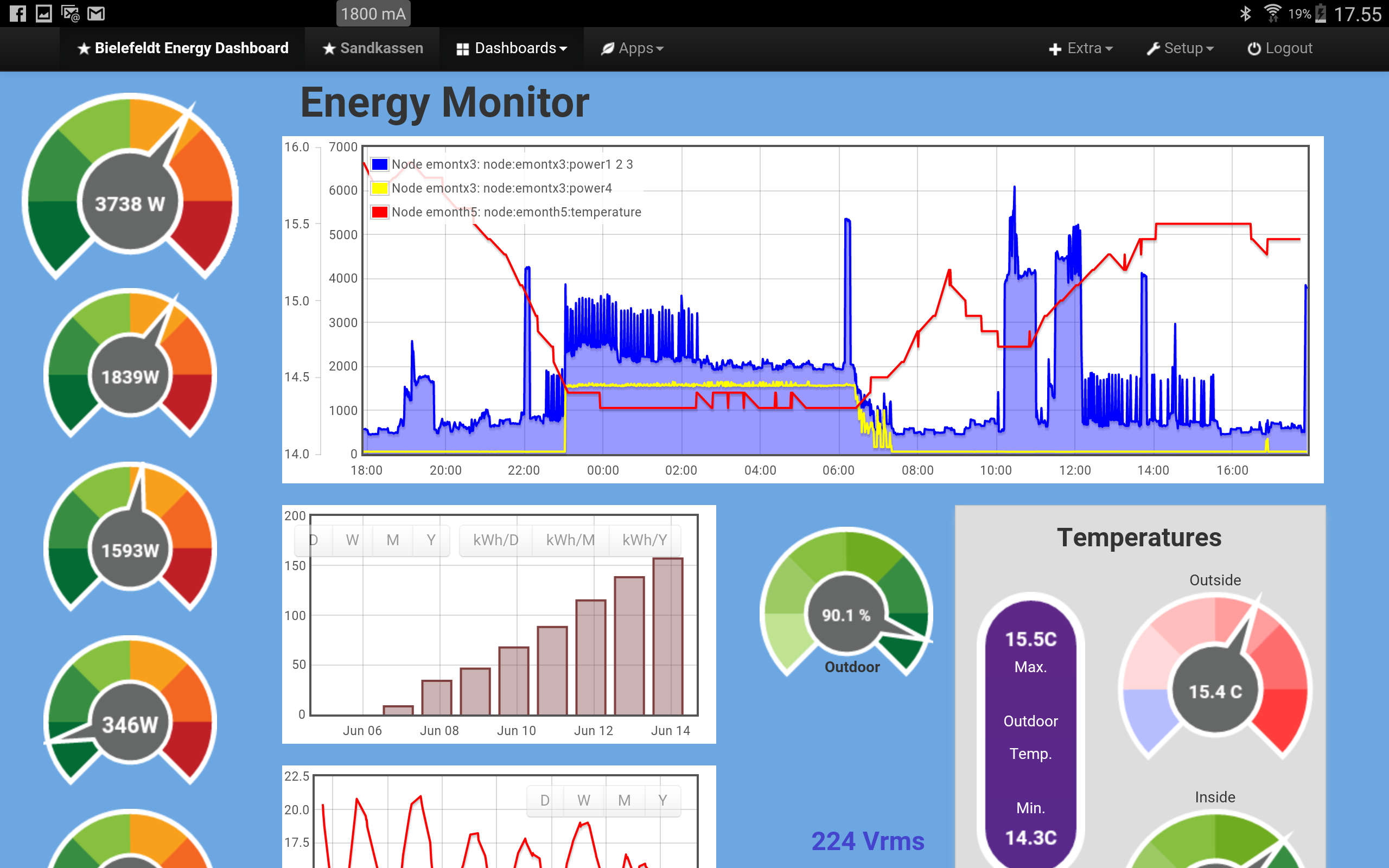 How are you measuring that 8.66A? Is it with a true RMS ammeter? Assuming yes, and assuming your 234V measurement is also accurate, then the 2026W you’ve calculated is the apparent power. Since you have an AC adapter I’m assuming the 1500W reported by the emonTx is real power. If they were all perfectly accurate, that would represent a power factor of 0.74 which is certainly feasible depending on the nature of the combined loads.

There are no engines in the household, and hence no phase shift effect.

AC motors aren’t the only source of phase shifts, and phase shifts aren’t the only source of non-unity power factors. My lighting circuit with a bunch of compact fluro bulbs has a power factor of 0.62 for example. What type of loads are on that circuit? Anything with a lot of switch mode power supplies like my compact fluro bulbs or any electronics such as TVs, computers etc. could be the cause of what you’re seeing (or transformers in low-voltage incandescent lighting).

I have done some research tonight

It has decided to enter the alternating voltage to the value of the corresponding constant DC voltage that provides the same power (heat) in electrical resistance. It is called Vrms. Each measuring instrument is adapted to measure Vrms AC voltages, so there should be no particular order to carry out such measurement. I hope you agree?

Nissan Charger
As previously described, is a measurement of emontx on our charger for our Nissan Electric car, 33% too low, but I do not know of any. phase shift of the switch-mode charger built into the car.

Electric Heater simulating Car Charger.
Therefore I test the same circuit just with a 2000 Watt heater, and measured the same way.
Here I get a measuring current of 8.37 A 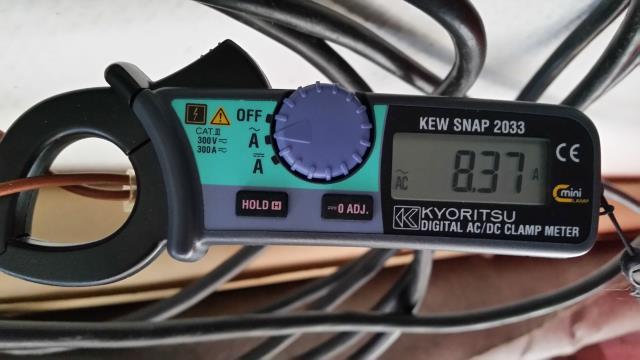 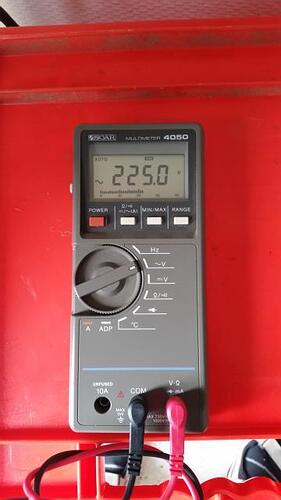 EmonTx3 and emonPi says 1252W on CT4 with max 4,5 kW
There must be corrected for the rest effect to a Network switch which run on the same group of 33W
So a total of 1219 W pure resistive load according emontx3.
A difference of 54% between the two measurements.
I have tried me with a second CT sensor, but it gives some same result. 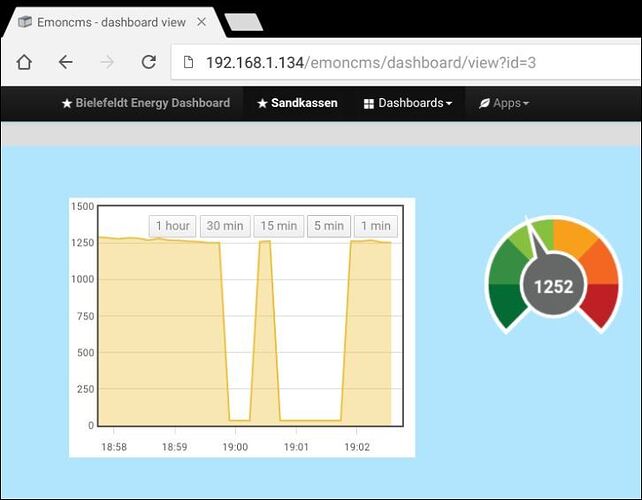 I have adjusted Vrms down with the following calibration 0.0087621, to emontx3 to measure correctly AC value.

It would only bring power up to 1391 W if no calibration was inserted.

I have a Efergy energy meters installed as reference.
www.efergy.com, an English power measurement consumer company.

It measures the pulses via the electricity meter and displays power measurement in a display. 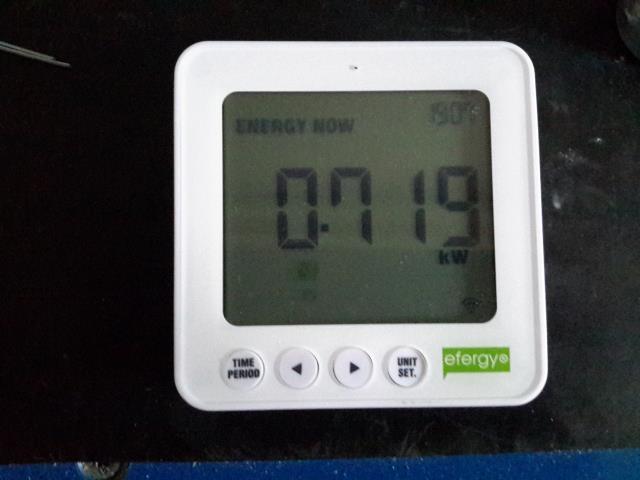 Power up heater
So I turn on my fan heater, and reads again after it has found a quiet level. 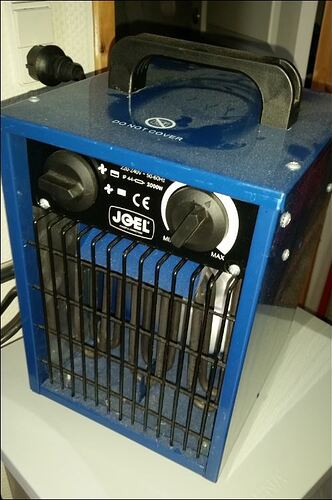 Efergy reading
Efergy read to 2579W a difference of 1860W, all very close to the 1883W I have measured and calculated with my instruments. 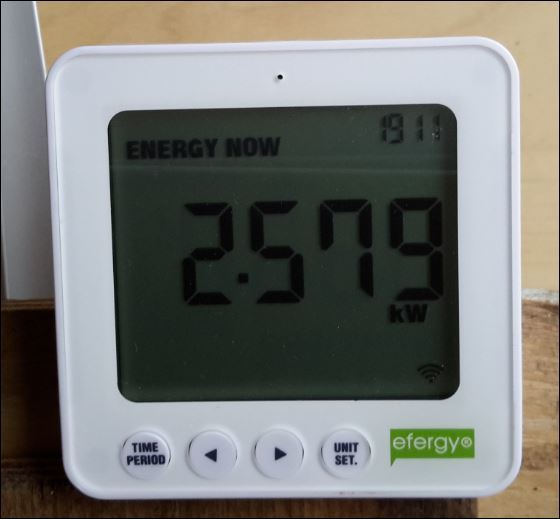 I thus has two independent measurements that says that my fan heater uses about 1860-1883W.

emontx3
emontx3 says while 1861W minus the prior reading 676W = 1185W, so close to the 1219W I previously measured.
The difference may be due to that one measurement is made with CT4, and the other with CT3.

I am so bad frustrated that there is so great variation between the measured on emontx3 and I can measure and calculate manually.

I have an extra emontx3 and 4 additional CT sensors in stock, and I should like to try to replace them all to see if it makes any difference. There may indeed be a cause.

Hope you can figure out if I’m way off with some of my assumptions. Maybe I missed something.

Here are some thoughts:

NIssan Charger.
As dBC writes, we do not know the power factor of the charger, therefore we cannot with certainty say that current × voltage = power. That might be true, but equally it might not be. We hope that Nissan have used a good design and that the power factor is good and close to 1, in which case that relationship will be true, or very nearly so.

Electric Heater Test.
We can be reasonably certain that the power factor will be close to 1, therefore current × voltage = power will be true in this case. We can also be reasonably certain that your KEW meter, although it appears not to read true rms, will be accurate within its specified range of ±1% ± 4 digits. (This means the actual current could be between 8.25 A and 8.49 A. The meter’s data sheet would say if it read true rms. It does not, so we must assume that it reads the rectified average and indicates the equivalent rms value assuming the wave shape is a pure sinusoid. That should not give a significant error with your heater, but it might with the sort of load that dBC warns about.)

If you have tested a second CT and that is also wrong by nearly the same amount, that tells me that it is likely that the CT is not the problem.

“EmonTx3 and emonPi says 1252W” when the correct reading should be at least 1883 W.
Are you using the CT inputs on the emonPi to measure current, or are you saying that the emonPi is displaying the power measured by the emonTx?
If you are using the emonTx, is it possible to transfer the CT to the emonPi, and can you use that to measure the current of your heater instead of measuring it with the emonTx?

I should have asked this earlier: Is the CT closed correctly around the wire? The faces of the ferrite core must come together perfectly and there must be no air gap at all.

Thank you for your responses and inputs.

I make a new lab lineup tomorrow where I collect everything on a table. Documents all the measurements with images and tables.

My mind is to test the various CT sensors on the same power circuit from both emonPi emontx3 and at the same time, the use of resistive loads in the form of hot-air blower and lamps.

Have ordered a Fluke 117 True RMS Multimeter for checking voltages and currents. WIll you think it’s an okay choice for Vrms measurements? 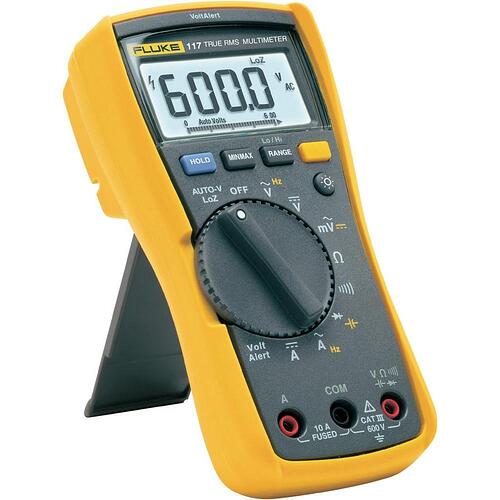 So we will see what it brings.

Two things:
Your heater will have a blower motor in it, which should appear as a lagging power factor. However, with the heater load being about 2 kW, the presence of the motor should make no real difference to the overall power factor of the heater, so I would be happy to say that the power factor was 1.0 for practical purposes.
I did not evaluate the Fluke 117 when I wrote the Building Blocks page about multimeters but quickly looking at the specification, it will do everything that you want to calibrate your emonTx - both voltage and current. A warning though: read the manual before you measure a.c. current, because there is a limit on how long you can pass the maximum current before the meter will overheat and be damaged due to internal heating, there is probably a much lower current at which it is safe to operate continuously.