Hi folks, Just got my emonpi up and running and very impressed with it! Working as a home energy monitor at the moment, my solar PV is being installed next week. However something I notice is the instantaneous power value that emon measures versus that on the SMETS2 IHD are different. Emon shows about 40W less than the smart meter display. Right now, Emon is showing 740W versus 780W on the smart meter display.
Is this to be expected? Or have I setup something wrong?
I’ve tried moving the CT around (admittedly it’s a bit loose) but doesn’t seem to make a difference.

Hey folks, I found this post which appears quite similar: EmonPi - accuracy of new install - calibration required? - #7 by Zarch
TBH I am surprised a brand new emonpi can be so different to the meter values and I have to calibrate. I didn’t see such mentioned in the setup docs.
Instead of calibrating as described in the other post, I wonder if it’s OK to use the values from the smart meter? Is that recommended?

There is an article in the ‘Learn’ section that explains the factors that affect the accuracy of the emonTx (and the analogue part of your emonPi is almost identical), so you might like to read that.

740 W represents a current where the c.t. is inherently less accurate, so you’ll probably find that at higher loads, the difference will change, percentage-wise, and I’d hope and expect that it would improve. I’d suggest that, by adjusting the calibration (“scales = …”) in emonhub.conf by a small amount, you’ll be able to improve the long-term accuracy against your tariff meter, using of course the energy (kWh) values accumulated by emonCMS against the meter’s kWh values.

The c.t. should NOT - despite what is likely a Chinese mis-translation - “clamp” on the cable, it should be a loose fit, such that the two halves of the core can meet snugly and there’s absolutely no stress on the very brittle ferrite core, which will snap if it is stressed.

No it is to be expected. The simplest way to ‘calibrate’ is to get a pulse counter as well, hook it up and compare the pulse derived power consumption over a period to the CT measured power (easy enough with the graphs module). You can then multiply the incoming value to emoncms by a correction factor. The difference will still vary as the voltage varies but should average out over time.

On the graph module, one of the kWh feeds on left, the other on the right. Click on ‘Statistics’. The difference between the *Diff values is the correction factor. Note do it over an extended period to average out any fluctuations. (below is a short period as my measuring was interrupted). 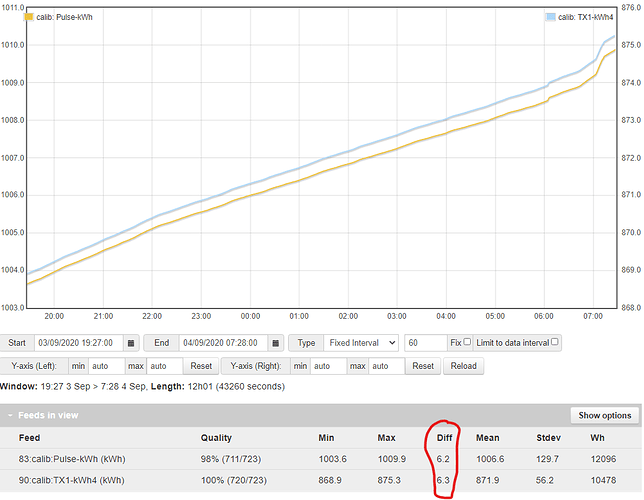 Thank you all for the information. I managed to calibrate and just want to share here how I did so. It was a quick and perhaps crude method, YMMV, but the results are adequate. I simply used the Utility provided smart meter display which shows the current consumption (refreshed every 15 seconds I think). I noted into excel a series of data points from the meter display and the simultaneous readings from emonpi. I did this while varying the amount of power consumed in the house, e.g. turned off most items (low), then a kettle (medium), then the immersion heater (high). So I had a range of data points from the meter, emonpi, over wide a scale of energy consumption. After that, just a case of doing the maths to calculate the scaling factor and then update the emonhub config as described in the documentation.

I also updated the Voltage calibration by taking a reading from a standard multimeter plugged into a socket.

The result, at the end of each day the kWh consumption on emonpi and the utility meter almost agree with one another. It’s not perfect, but good enough!