The various Guidance docs seem to imply that setting up OpenEVSE and subsequently changing settings can only be done on site via WiFi access to the local network.

However the illustrations look very much like a Mobile App.

Question - Can OpenEVSE settings be accessed remotely miles away from the charger site - via a ‘cloud website’?

Yes, you are correct. To connect to the OpenEVSE and display the interface web page you need to be connected to the same WiFi network as the unit. The interface is a web page which has been designed to work well on mobile devices. It’s not an app.

Without opening ports and setting up a dynamic DNS is cannot be accessed remotely.

However, the OpenEVSE can also be controlled by an emonPi running DemandShaper Emoncms module which is now installed as standard. DemandShaper is used to automatically schedule an EV charge at the cheapest price on a dynamic tariff e.g Octopus Agile. Using a service like Dataplicity the emonPi and DemandShaper can be secularly accessed remotely, see our remote access user guide. 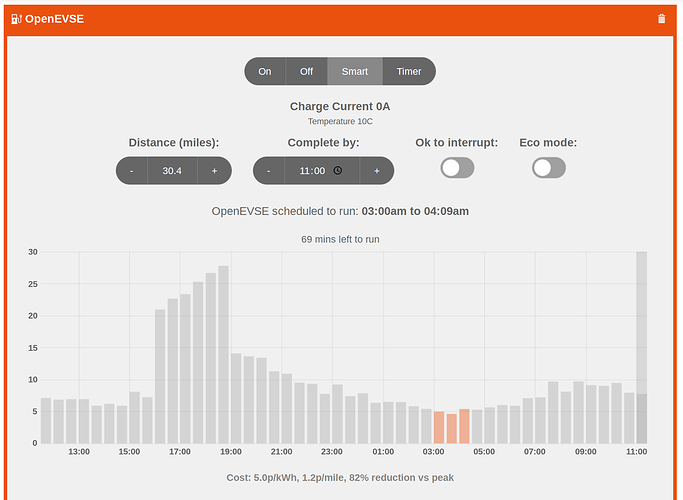 Thx for the clarification. Would a mobile App be a good selling point?

The site I’m involved with is my son’s place so I already work remotely – I changed from dataplicity to remote.it, as an aside – and can access six RPi’s running the emon image at no cost.

It looks like to get access to more controls than offered by the DemandShaper webpage it will be necessary to install a lightweight desktop & browser on one emon instance and then use VNC. I’ll let you know how I get on after I receive and install the WiFi module.

Thx for the clarification. Would a mobile App be a good selling point?

We are working on improving the remote access for emonPi.

Out of interest what controls do you consider are missing from Demand Shaper?

It is possible to make the OpenEVSE interface accessible remotely by port forwarded, this is not recommended from a security perspective but would be secure tunnelled over a vpn.

As you are working on improving the remote access for emon, I recommend that you take a look at remote.it . Apart from their product, their technical support is super responsive. And the time difference to the US West Coast makes it all the more convenient.

So maybe an RPi running emon image (with remote.it also installed) on a remote network could access and present the webpage of OpenEVSE (connected on that same remote network) on my local Windows laptop.

I’ve found it easy to try out remote.it. Hook up an RPi running emon on my local network and install the remote.it connection application. Then from my Windows laptop I can access that RPi not directly but via remote.it back to my local network. I recommend that you give it a go.

Assuming the EV is parked at home, it would be sub-optimal to charge to full at albeit cheap night rates because next day there would be no ‘space’ for any free charge from solar. So best only to charge up to a limit (set by the user) that covers next day’s driving needs (which is independent of whether or not the sun will shine strongly next daylight). I now have a script running on emon as a service that interrogates the Tesla EV mobile App data and inputs it to emoncms. It shows whether or not the Tesla EV is online and the latest (or last time online) battery % charge and battery range – see screenshot. 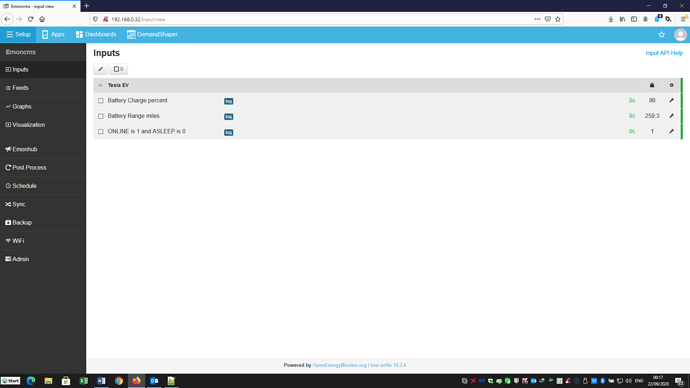 Hopefully it will be possible via MQTT (and a script?) to input commands to OpenEVSE/DemandShaper to charge at cheap night rates but only up to a user defined battery charge level or range. Being pragmatic, it need not be sophisticated as to timing – approx 1am to 5am is always much less costly.

The capability I’ve described above looks very much like that of the Open Vehicle Monitoring System – another gizmo and costing close to £200.

Remote.it looks good. I’ll take a closer look at that.

The Demand Shaper supports obtaining the SoC value from Emoncms, OVMS is not required if you have an EV that already has a telematics system e.g Tesla.

You just need to log a feed in Emoncms with the name ‘soc’ to the same device as the OpenEVSE e.g

This can be done via MQTT by posting the soc value to MQTT topic emon/openevse-xxxx/soc, repalce ‘xxxx’ with your OpenEVSE ID.

Then set Demand Shaper on 'Battery charge level (input) and the current SoC will be displayed in brith green in the Demand Shaper. Then just drag the light green bar to the desired SoC (e.g 60% in screenshot below) and Demand Shaper will automatically schedule a charge. 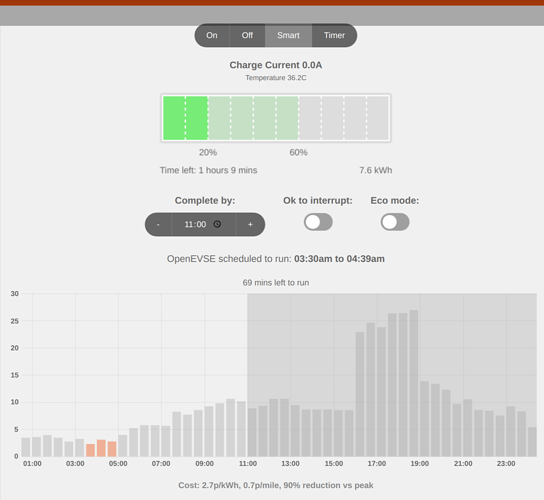 Thx - that’s fantastic.
I’ll try it as soon as the WiFi module for the kit built EV charger arrives and I go on site to fit it.
I’ll keep you posted.
There will be other challenges, of course, like stopping the PowerWall battery from discharging to the EV to minimise import (its role in life) rather than allowing EV charging to add incremental import.
But a step at a time …

I note yr interest in improving remote access to emon.

I’ve studied the documentation more closely and concluded the following:

I must first make a site visit and get the EV charger connected on the site network. Thereafter I can work remotely.

I’ve been using remote.it for a while. From my laptop I select which RPi to connect to then select the web service and launch browser: 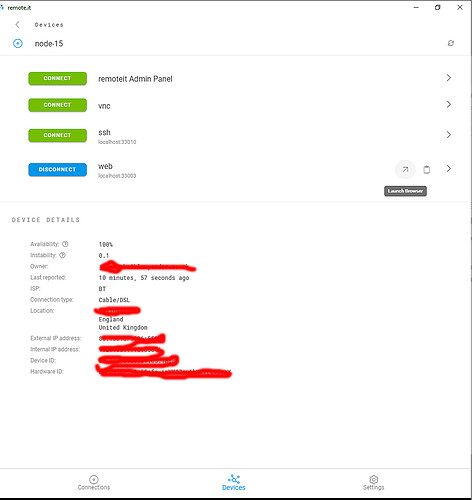 Immediately I’m presented with the emon sign in page and after that with the main emon page which has the DemandShaper icon.

I’m hoping that will allow me to remotely set up and control DemandShaper.

The illustration you provided shows an Eco-mode button. Will it be possible to have Eco-mode running during the day and, in parallel, DemandShaper charging at night at cheap rates?

Remote.it looks very similar to Dataplicity that we have been using.

Will it be possible to have Eco-mode running during the day and, in parallel, DemandShaper charging at night at cheap rates?

Yes, if you enable EcoMode on the OpenEVSE interface the EVSE will use EcoMode (solar PV divert) during the day when solar PV is generating then Demand Shaper can then be used to schedule an off-peak overnight charge. You can use both together.

Dataplicity and remote.it are similar products.
They are both commercial organisations.
But their pricing is very different …

remote.it is free for personal use subject to their Fair Use Policy. As a guideline that means not exceeding 10 devices or 250 daily connections.