I’m new in this community and I want to say hello to everyone.
I am writing to you because I have some doubts regarding the possibility of doing the following setup for my solar panel system.
There is no communication between inverters and I am a grid-connected user so I can export all the extra produced power, but I am not sure if the anti-islanding protection will work, or if I could get failures. Please see my following sketch. 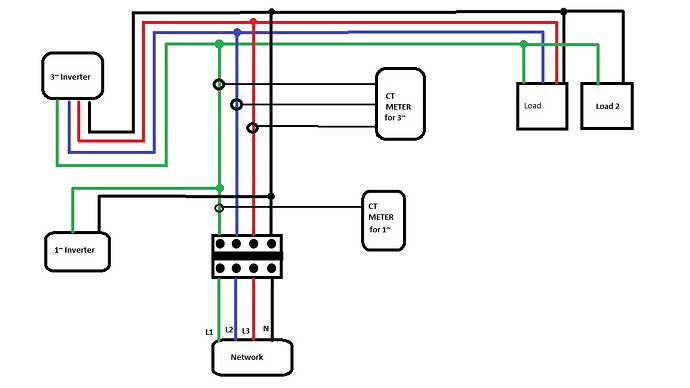 Are you planning on using EmonCMS to monitor the setup or are you just after some advice?

As to your anti-islanding issue, it’s a little difficult to tell from a line diagram.
What inverters are you using? What do the specs of the inverter say?

I know very little about anti-islanding protection, but I’ve been a controls & systems engineer for most of my professional life, and I can’t imagine that each inverter will provide the other with a sufficiently stable network to convince it that it is still connected to a stable network, so I believe the anti-islanding will work. However, the inverter manufacturers should be able to give you a definitive statement, so I suggest you add the inverter details to your diagram and send a copy to each manufacturer.

Is the situation that different from having one of those inverters at your place, and the other at your neighbours? When the local distribution transformer trips, all the inverters and all the loads in the 'hood are still connected to each other. The anti-islanding protection then kicks in and the inverters drop out. I wouldn’t expect property boundaries to make much difference.

Hey dBC,
My arguments were similar to yours when I design this, but what about the situation when the system is configured for “No Export” and both CT meters detects current pulled from the network? Which of them kicks in to feed the loads? What happens if both kicks in?
I am expecting also that the 1~ phase inverter to record the total exported energy of the system.

Now I am considering the normal operation.

The “No Export” makes things much more complicated. I assume that’s a local requirement?

In the case of more available PV energy than load:

The 3-phase inverter will be trying to ensure there is no net power flowing through its 3 CTs. I’m pretty sure it will distribute its power evenly across the 3 phases. So if say you had 3kW of load on the Green phase, and nothing on the other 2 phases, it would output 1kW on each phase. Strictly speaking you’d then be exporting 1kW on each of the Blue and Red phases, and importing 2kW on the Green phase, but your polyphase revenue meter should add all that up and declare it a wash - no power flowing.

Meanwhile, the single phase inverter is going to see 2kW being exported on the Green phase. Who knows what it’ll make of that. At the very least you’d hope that it would stop generating any power as it desperately attempts to get that 2kW down to 0 to comply with its NOEXPORT rule. If it thinks it’s the only generator it may declare a fault.

There are a bunch of other scenarios to consider too, almost too many to get my head around (loads on other phases, more loads than one inverter can currently supply, but less than the other etc. etc.) The combinations seem almost endless. But I think almost all of them will involve two control loops that know nothing about each other, each trying to achieve similar but slightly different objectives (one netting across 3 phases to 0 and the other trying to get one phase to 0). I don’t think it can work.

If you are allowed to export then I think it should work fine, even during blackouts.

Thanks a lot for you well described reply.
The No export it is not for the moment a network requirement, but who knows in the future.
Yes I can export everything that it is produced and take it back from the network with no other costs.

PS: I think it make more sense to remove the 1~ CT meter and let both inverters to produce as much as they can. The 1~ inverter must be placed after the 3~ Ct meter, closer to the load.

Actually, I think there’s an error in my scenario description above. The single phase inverter will see a 2kW import (not export) on the Green phase. It will then presumably try to inject 2kW to balance that. The 3-phase inverter will still just see it as a 3kW load being fed from the “grid”, so won’t back off, but the revenue meter is now going to see a net export of 2kW (I think - this is my third attempt to get the interactions correct).

It’s all much simpler when both inverters are just allowed to output everything they’ve got, and let the power flow as it sees fit.

The 1~ inverter must be placed after the 3~ Ct meter, closer to the load.

I think that is the solution.