Continuing the discussion from US 200 Amp Service:

Another take on this question focused on 120 Volt service would be using the wire gauging established used by the electrical norms of each corresponding country.

USA has the National Electrical Code (NEC).
UK has the British Standard BS 7671.
Mexico has the Mexican Official Norm (NOM-001).

I’ll talk about the NOM-001 since it’s the one I know the most, as I live in Mexico.

In Mexico, the standard service is 120 Volts. The wire coming from the transformer is AWG 6 (SWG 8) for every home (unless a different amperage is required by the user).

Every wire up to the smart meter (both the service wire and meter) is owned by the electrical company, right after the meter comes the home wiring (owned by the customer).

Every home electrical installation is expected to have at least AWG 8 from the meter to the fuse box, and AWG 10 from the fuse box to the inside of the home as the “main conductor”.

The maximum electrical current that AWG 8 can support is 60 Amps. At higher ambient temps,
it can be as low as 40 Amps - depending on the insulation 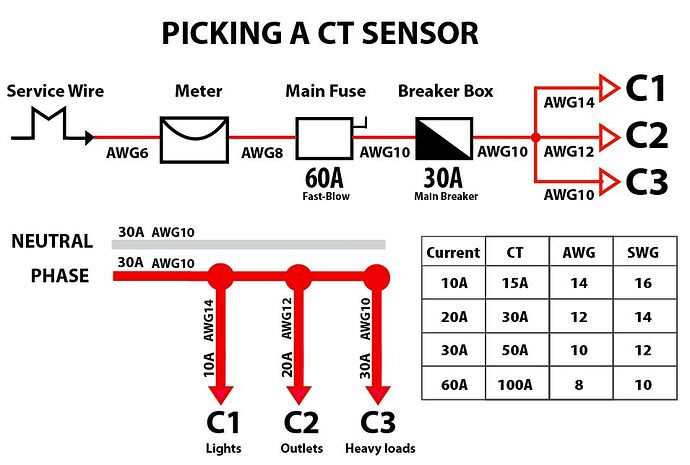 To verify this you can also call your electrical service provider and ask them what’s the gauge of the service wires.

Do you need a 100A sensor to measure 30A? Not really. You can easily get away with a 60A sensor, since it will be extremely rare to see someone using anything above 30A from the service wire for long periods of time as the fuse box has a 60A fast-blow fuse followed by a 30A Circuit breaker. A 60 Amp CT will give you plenty of headroom.

Genuine copies of BS 7671 can be obtained direct from my professional Institution, the IET:
http://electrical.theiet.org/books/index.cfm