Setting up MQTT for the first time

This would mean all the data goes to that broker and none to the emonCMS it normally goes to.

I have entered those details in emonCMS on an emonTx/ESP8266 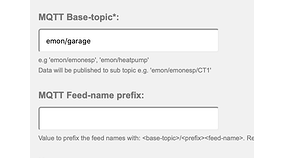 I suggest first box should be emon, second garage`.

In NR, to test, subscribe to emon/garage/# and I expect you will get a number of sub topics.

This is such fun when it comes together and works

By slightly changing things within the espwifi3012 that is attached to the emonTx in the barn (thanks for clarifying this, @borpin ), and being more explicit within NR (ie cutting out things like ‘pulse’, ‘spent’, & ‘Vrms’ etc, the 10 second feed value of the specific CT that I am interested in (“real time” pv generation in watts) flows through.

This data is no longer going to emonCMS - is that what you want?

You can just send the data via MQTT to the emonPi and then connect NR to that Broker. Better to only have one Broker on the network.

Either than or bridge the 2 but that is not usually required on same network.

I might be misunderstanding something here, and I did check, but the data (from the only CT I have on this emonTx/ESP8266 combo) is actually arriving in both NR and my local version of emonCMS on the emonPi.

Every 10 seconds, the same digit (PV generation) appears in both the NR debug window AND the emonCMS Feed page.

I certainly don’t want to cut out the data going to emonCMS - I just wanted to effectively create a duplicated branch so that I could then work with it in a different way (c/f control a smart plug if, say, PV generation is >=50w).

I might be misunderstanding something here, and I did check, but the data (from the only CT I have on this emonTx/ESP8266 combo) is actually arriving in both NR and my local version of emonCMS on the emonPi.

Ah OK, I thought the ESP was an either or (MQTT/HTTP). I don’t use it.

But does the emonPi receive the data via RFM or is it out of range?

Again, I think the emonTX will still transmit the data by RFM, but if it is out of range of the emonPi you will only get it once.

99% sure my system doesn’t use the RFM due to extended distances between the Tx’s and the emonPi. (Back when I initially set things up I even put RF signal blockers on the aerial screw threads).

For a temporary “proof of concept”, I have now been able to cobble together a NR flow that turns on a Hue lamp on when the barns PV are producing >100w, and turn it off when not. Next stage will be to replace the lamp with a smart plug, & replace the generation Input to an export Input, so that I can use otherwise exported generation to charge a 12v battery which will in turn keep a classic car storage “bubble” inflated FOC for much of the year.

I am tempted to think that the espwifi3012 widget is able to transmit via MQTT to NR and to my emonPi via wifi / emonCMS, as data is arriving in both places. Perhaps @TrystanLea could confirm this?

Most excellent so far!

I have now included a routine whereby if the panels produce <2 watts NR generates an email saying so. This will be handy to monitor the inverter switching off due unexpectedly which is great. It’ll also send me an email each evening as the sun goes down, but I can cope with that for now.

Is there a way to get an emonPi to send MQTT messages? There isn’t the same type of “Control Panel” that the esp8266 wifi devices have. Not sure where else to look …

Is there a way to get an emonPi to send MQTT messages? There isn’t the same type of “Control Panel” that the esp8266 wifi devices have.

What do you want to send? Look at the input process - you can include a publish to MQTT, but it is to the Broker on the emonPi (as specified in settings - same one in and out - can’t change that - hence only having one on your network) and use a different base topic not emon.

Thanks. Whilst I measure my barns pv generation on an emonTx, I measure net in/out on an emonPi; I’d have preferred to have used this net out data to control my smart switch.

I understand that one can / should only have one MQTT broker on a network, and because I am using one on a RaspberryPi I would have liked to get my emonPi to send an MQTT message out to the RPi broker. But it seems like this might be a complication too many, so rather than using a net out figure, I will just use a figure of ~50 at the inverter, which will allow for the constant ~35 draw that the barns & office use 24/7.

One other quick MQTT question … Whilst I understand that it is a very lightweight protocol, where do all of the messages end up? Does one need to clear out a cache every now and again to prevent the SD card from filling up? Or is it all de minimis?

EDITED TO ADD: I’d also like to have an automated email alert for if my panels go offline due to a circuit trip; I just thought that MQTT & NR would be a good solution for this.

The suggestion is to not run Node-RED on your emonPi (recent thread about a dead emonPi).

Hi @borpin
Can you please elaborate more?
I have been looking for that thread and i am not sure what one you are refering to.
Is this the one?

yes it is that one. The partitions etc of the emonSD have been modified to try and reduce wear levels, log files are in ram and a few other tweaks mean that running anything else on an emonSD based system risks the underlying function (running emonCMS).

I understand that one can / should only have one MQTT broker on a network, and because I am using one on a RaspberryPi I would have liked to get my emonPi to send an MQTT message out to the RPi

There already is one running on the emonPi (as I said before), so just use that and connect the ESP & NR to that broker.

Then you can use the publish to MQTT process and voila.

NR can of course connect to multiple brokers - another solution.

Thanks.
I am looking for another alternative since my idea is to have everything integrated on the same machine.

I am looking for another alternative since my idea is to have everything integrated on the same machine.

If that machine is a Pi and has emonCMS on it, then I suggest that is a bad idea. Run everything on a VM or on an NUC with an HDD/SSD - different beast but YMMV. Good luck.

I installed a Mosquito broker on a headless RPi that is also running Homebridge.
I told an emonTX/ESP8266 to publish data from a CT to that broker
I created a Node-RED flow that uses this MQTT info
All good so far.

I understood - rightly or wrongly - that one should only have one MQTT broker on a LAN. But because I would like to send a Feed data from my emonPi via MQTT so that it can be included in the NR Flow I needed to make some changes to the Broker.

I took it that I ought to delete the MQTT broker on the RPi first. Trouble is, I don’t know how to. I ssh’d in and typed sudo apt-get purge --remove mosquitto* but whilst it seemed to accept the command the MQTT feed within NR is still working, despite a RPi re-boot.

Moving on, I ssh’d in to my emonPi, created a new MQTT password & restarted the Pi following the instructions at https://guide.openenergymonitor.org/technical/credentials/#mqtt but whilst I can log back in to emonpi.local and see the Tx Inputs and Feeds etc, all of the Inputs on the emonPi are showing “n/a” & “NULL”

I am not quite sure what I have done here …

OK, I have managed to back out of most of the errors, but I am left with two questions … but one can wait for now.

Getting MQTT data out of a local emonCMS on an emonPi

I have set the emonPi to act as MQTT broker, and it is working well for data arriving from two emonTx/ESP8266’s. But I can’t work out how to publish MQTT out of a CT Input on the emonPi. Does anyone know how to do this?

Within the MQTT section in the espwifi page of an emonTx/ESP8266 I have this.

Within a Node-RED flow I have this (with “MQTT emon” being on my emonPi). 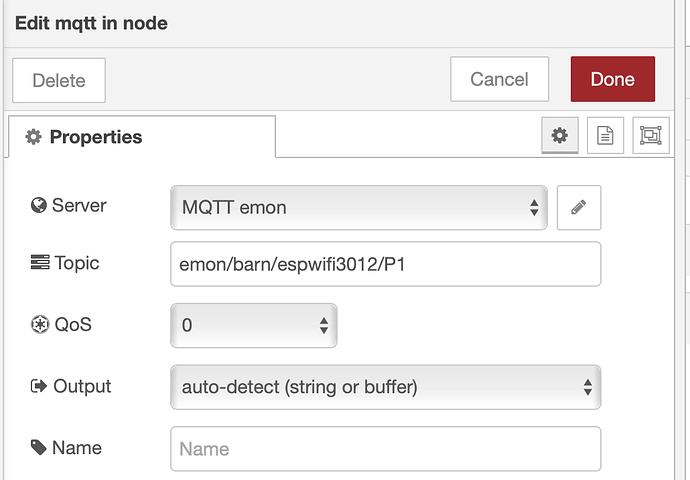 Both work well and do what I want. But the lack of the MQTT “page” when logging in to my emonPi on 192.168.2.50 means that I can’t work out how to tell the emonPi what Topic to use etc. I have added a Process (see below) to one of the CT’s on the emonPi, but I can’t retrieve the data that I want within Node-RED. I’ve tried lots of combinations of Topic forms, but none work. It may well be that the emonPi isn’t even generating any MQTT data of its own, but I don’t know how to even check this. 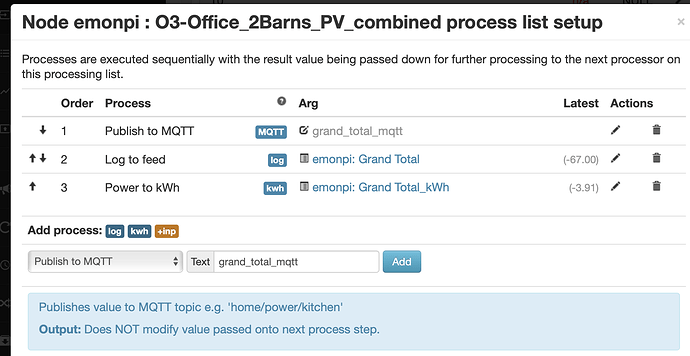 @haffle, great to see your progress! I’m rather behind you, but on MQTT I used “MQTT Explorer” (free download for most platforms) to understand the structure of all the topics coming out of the broker - it saved a great deal of frustration trying to figure that out from Node-Red & other MQTT clients.

Put the publish after you have the data you want else it is just sending the same value back out again - I suggest after the Power to kWh although I’m not sure that is the figure you actually want (as it isn’t cumulative I don’t think).

As explained here, the text here is the topic it is published on. A normal convention would be to have a base topic like data_from_emonpi/ and then the data topic so it becomes data_from_emonpi/grand_total.

in NR you then put that in this field

Thanks @borpin. I have now managed to get both my emonPi and an emonTx/ESP8266 to send valid MQTT messages to Node-RED. Very happy with that, and as always, very grateful for the help here.

Sorry for the late reply. I never have seen your reply.
Since you advised me before to avoid integrate everything on the same rpi, i am thinking in another solution.
Thanks for the advise. It’s a better decision.

I have this: Seeed odissey.
The main problem for now is that i don’t know how to use the gpio pins in the same way as rpi does. From what i have read, Rpi’s have a library that makes it very easy to use gpio, specially on Node-red. On X86 PC’s, only have the possibility to use it by sysfs (but i think it’s deprecated in favor of another way), and i am no good coder to make use of it.
I know i don’t need the gpio in Odissey for the setup below but it would be better for me to use it as is more easy for me to measure impulses (water and gas) on node-red.

My first option is to use emonTX and emonTH to transmit to Rpi, then rpi transmit by cable to Odissey PC using mqtt and Node-red for another stuff (LCD with dashboard, impulse/consumption, gas and water and temperature info. Maybe some cameras streams and some relays but not for now.

@Paul, on node-red there is a node that makes use of Rpi Gpio https://flows.nodered.org/node/node-red-node-pi-gpio.
Do you know another that allows me to use x86 system’s gpio?

And sorry for my bad english.
Thanks
Celso