Scripts to drive an Ecodan heatpump via MELCloud

I know this isn’t terribly useful, but here’s what I’ve been seeing. 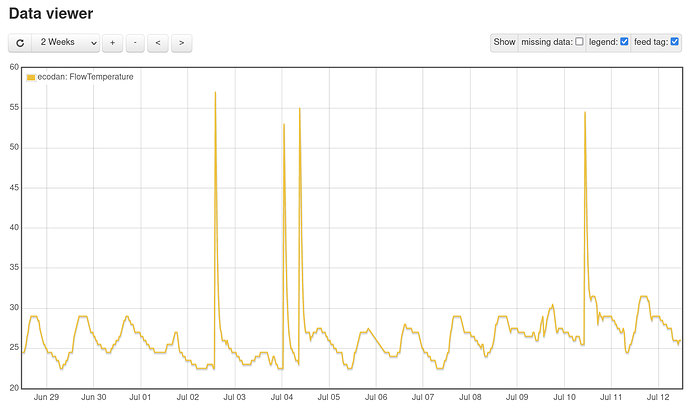 Could you possibly be having upload problems where it can’t send new data via your Wifi @Dan_Nichols ?

This is what I’ve got for the past week and a half. I don’t think it’s likely to be an upload issue as the hourly reports on MELcloud are always updated (thats what I use to manually check the hot water temperature when this sensor fails). I won’t 100% rule anything out at this stage though.

There’s an option somewhere in MELCloud to say “send me an email if the uploads are failing”. I can’t remember if it’s enabled by default. It would alert you if that was what was happening.

I found the options under settings > application options and I do indeed have these set to email me in the event of an error or loss of connectivity. The only time I’ve had emails is when I’ve had internet failure (last one was mid-May).

I reported the issue of stale hot water temperature to Mitsubishi technical support UK who apparently were’nt aware of it. The support team have referred to development so I’ll chase for an update in a week or two if I’ve not heard.