So I’m attempting to install EmonCMS into a Proxmox Container of Ubuntu 22.04. While the scripts appears to run completely. I am finding that EmonCMS is not starting up. I’ve done some troubleshooting and what appears to be happening is the service-runner is not starting. I guess what I wonder is if there might be some preliminary packages that need to be installed before using the script or not. I see @borpin has posted that he successfully installed EmonCMS in a container on proxmox.

I should note, I have also attempted EmonCMS install in an Ubuntu 20.04 container with the same result. This leads me to believe there is a step being missed.

I’m attempting to install EmonCMS into a Proxmox Container of Ubuntu 22.04. While the scripts appears to run completely.

Did you follow the prep instructions re sudo for Ubuntu installs?

Trystan has modified the scripts recently to stop the install of Python packages using sudo pip so that may be the issue. I think you are probably the first to try it since then!

Can you check the system log and see what is happening? If the Python is crashing it will show there.

For the service itself

[edit]
Oh and elsewhere, there have been reports of issues with 22.04 (do a search).

I dug out the other thread. Note the helper scripts I recently found

I (re)mounted /var/opt/emoncms to an usb stick attached to my pi. Should i change certain things? emonSD

I was lucky I had a couple of old ones here and some spare memory chips. If you are going to use it, I’d just install PVE, then run emoncms in an LXC container. Some one pointed me to this guy recently - Proxmox Helper Scripts | Proxmox Scripts For Home Automation for easy to use scripts - install Ubuntu then use the OEM emonscript to install emoncms. Running PVE will draw much less power than Windows (even if in a container or VM). Spinning Discs draw a surprising amount of power as well.

I did manage to get it to work. In my case I needed to preinstall PHP8.1. Not sure why it needed that as I see the script does it as well, odd bug maybe? But I can happily say that EmonCMS is now up in a container using Ubuntu 22.04.

Keep an eye on SWAP usage as there have also been some odd things happening on that front with this kernel.

I’m recently into Proxmox thanks to a video from Andreas Spiess. Also got a Lenovo Thinkcentre M73 with i7 and 8GB of RAM on eBay Germany for €109 :). Only it came with a Chinese SSD Zheino S3 512GB. So don’t know if this is thrustworthy or best to swap out for a Crucial or Samsung SSD. 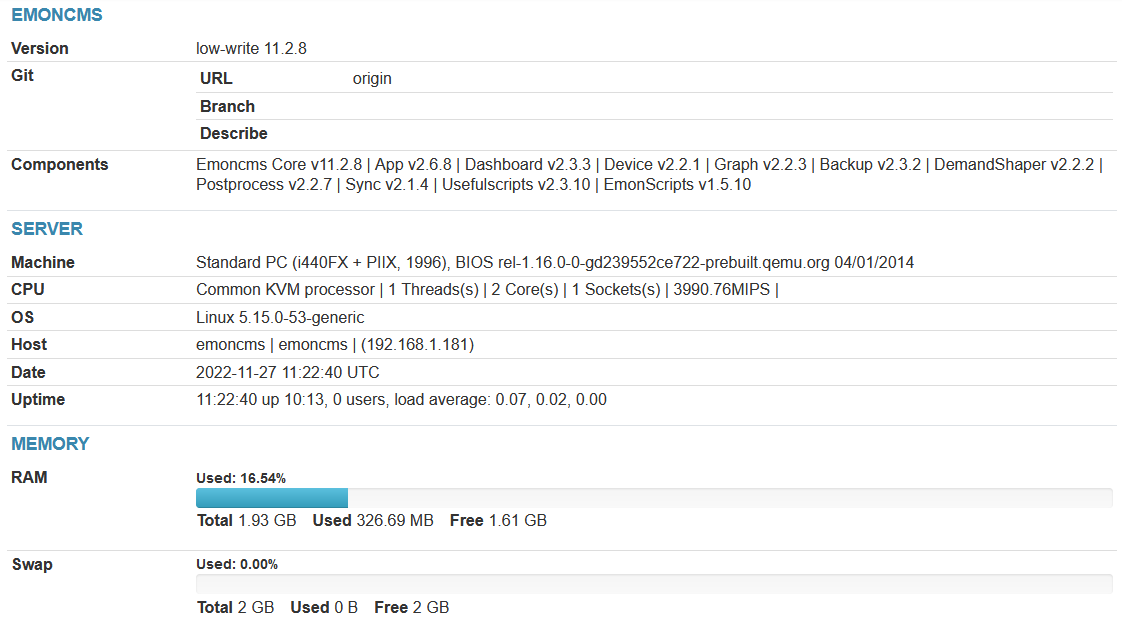 It’s very nice, at the moment a emoncms VM and a HA VM which also runs very fast on this compared to a RPi4.

I do enjoy using Proxmox myself. I went a bit overboard. Decided to build a virtual machine and network access server. Ryzen 5 3600 with 128GB of RAM using the ASRock 470 server board. 18TB of storage RAID 6 and another 4TB RAID 6 for VMs/CT.

I’m planning on upgrading the Ryzen to an Epyc in the near future since I want more RAM and more PCIE lanes.

Laptop and PVE is unbeatable IMNSHO.

It’s very nice, at the moment a emoncms VM

I suspect you’d get lower resource use with an LXC Ubuntu container and install with the Emonscripts (this is my setup). 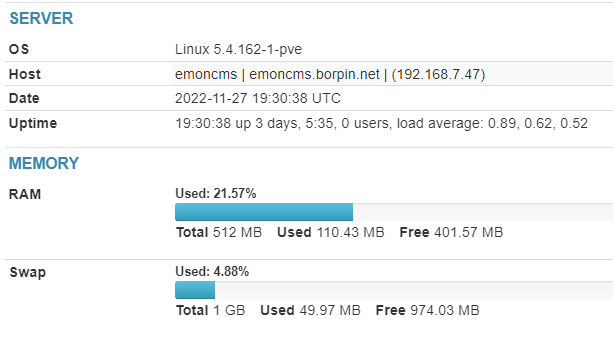 It had been up for a stupid number of days, but the automated snapshots were failing - a reboot of the container seems to have fixed it

I do need to move my setup to a the new PVE version. Looking for another cheap laptop!

@borpin you can always try the darkside

– my system being up now for +4 years on BPi-R1 ( I have about 10 of them left over from a job that I did, now I play around with them squeezing the most out of them ) you could try the BPi-r3 or Newer BPi-r2v2 pro

my system being up now for +4 years on BPi-R1

I’ve got an old laptop that I upcycled from the kids with some additional memory (from another old laptop) and fitted with an SSD. To me the main advantage of the laptop is the inbuilt UPS and the low consumption CPU (by design). It’s got 8 containers and peaks at 14% CPU occasionally! The issue is the battery occasionally decides to not charge. I can get it back with a bit of fiddling but it needs replacing as I’m sure it is the charging circuitry not the battery itself I’ve been watching eBay for an i3/i5 16GB refub laptop. A few around and prices are dropping slightly as we approach Christmas.

just mention on the bpi-rX type routers they have port for small 3.7V lithium battery interface. and can be fitted with SSD or NVme SSDs - or even the newer 8core - 4-32 gig versions iE: orange pi 5 ( and others) and have incredibly small power consumption even compared to laptop