I wonder why there are 2 repos?

For me, what I’d like to do is eliminate that final burn unless it was needed for a shower as all it does is heat the environment overnight.

You may well be correct but I am not sure. Our system is unusual. We have a work/live property that has 2 separate buildings. The boiler (and also the Emoncms server) are remote from the living accommodation which is some distance away. We have a heat main running underground that is kept at an almost constant temperature controlled by the boiler thermostat. When the underfloor heating or the HW tank require heat valves open. The response is very fast. Also the HW thermostat and the temperature sensor are at the same height as the hot water coil.

As you have raised the question I will try and monitor when the thermostat demands heat and add that to the graph. I already monitor the heating valves. The reason I first embarked on monitoring using Emoncms was to make sure we were not wasting gas. On the way I discovered that the heating thermostats we originally had were not at all efficient as we were getting massive overshoots. I even considered building a custom thermostat with some prediction. In the end we finally settled on Netatmo thermostats and they work reasonably well. We are at the property every day so one or other of the buildings is rarely unoccupied for any length of time. In the end we have removed the timer from the underfloor heating and leave it on all the time under thermostat control. It made little difference to our gas consumption but has made a huge difference to our comfort levels with very little fluctuation.

I also noticed the HW temperature drop off and we have a supposedly state of the art Oso HW tank. It is on the list to see if we can add insulation. Not easy as it is in the loft. I may be able to box it in completely apart from a small service hatch where all the electrics are connected and then fill the box with some type of insulating media.

I also just realised I am using an emonTH and not an emonTX as I stated earlier. Hopefully I can use a spare digital input to monitor actual thermostat operation.

Thank you all for your help with this.
I have placed an order for a emonTH with a single sensor and will start with that and see how I go.
If I need to, it looks like I can always add an extra sensor later, but that will need a bit of fiddling that I’m not sure I have time for at the moment…

If I can get the tank temperature linked up to control my hot water via Tado, then it will be one more thing automated in my home…

that it will show up the info that I need.

I also noticed the HW temperature drop off and we have a supposedly state of the art Oso HW tank.

I have massively improved the insulation of the pipes from the tank as I realised that was the main heat loss (tank is an Akvaterm). Double layer EPDM pipe insulation did the trick.

In the end we have removed the timer from the underfloor heating and leave it on all the time under thermostat control.

Much the same situation. My issue is that most domestic thermostats work at 0.5 degree resolution. For UFH in a highly insulated, air tight house, I find just 0.1 degree can make a big difference. I’m now controlling it via HomeAssistant and that works pretty well.

I just wanted to report back and say how easy it was to get the emonTH up and running. Just put the batteries in and away it goes!
It’s really nice to have some tech that just works, such a refreshing change - so I just wanted to say Thank You to everyone who put the hardware and software together. I know it isn’t easy to make something so simple.

And just to show off, I now have data and can track my hot water temperature! 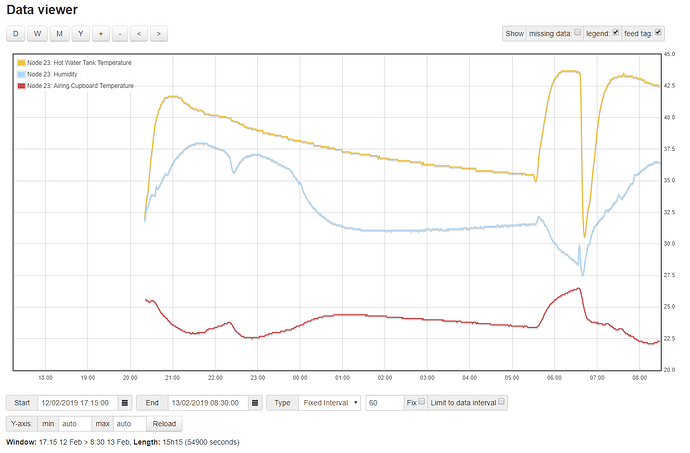 Just need to work out how I am going to use it now - but need a bit more monitoring first.

Looks like you’ve got yours set up - good job! My DHW tank has two ports or “thermowells” which are small tubes that extend a cm or two into the water tank; these designed for measure water temperature with thermocouples. They weren’t being used, so I stuck a DS18B20 into each and packed a little insulation over them.
Here’s my latest chart:

image1857×779 221 KB
The red line shows the tank upper temperature - the rapid rises are when the boiler kicks on. The blue shows lower tank temperature, which rises when my solar collectors provide some heat (yellow line). (this tank has two heat exchangers - the exchanger for the boiler is in the middle of the tank, the one for the solar input is at the bottom). I like to see that I’m getting some heat from the sun even on cold February days! During the summer, the tank lower temperature will often rise to be equal to the tank upper temperature - this shows I’ve got a fully heated tank. I can go for weeks in the summer with the boiler turned off as long as the sun shines! The graphic widget on the left gives a view of how much heat is in the tank and helps us decide whether to do laundry or wait for a sunnier day.
EnergyX (Mark) 15 February 2019 08:13 #28

If anyone is interested, I got some 7mm ID brass tube from ebay and drilled and brazed into 3/4 BSP blanking plugs. I replaced elbows on my tank with T pieces and my new ‘immersion tube’ extending into the tank. Then a bit of heat transfer paste and a DS18B20. See photo… 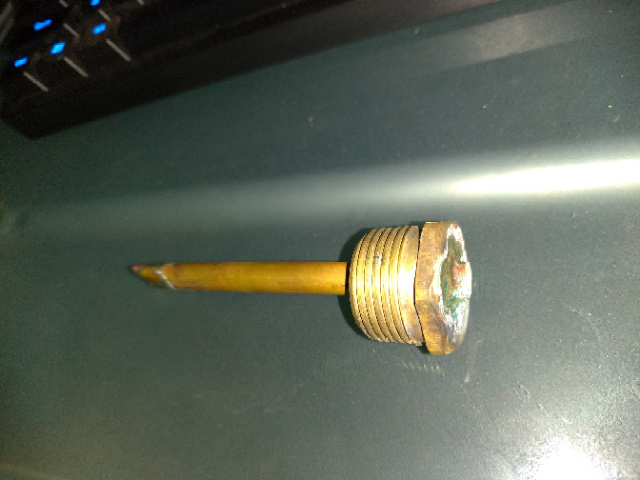 Or you can just buy a sensor pocket.

I searched everywhere to find an immersion sleeve and could only find one at a solar hot water supplier, who wanted forty bucks each. Re: your link - hmmm… GBP71 for two delivered - I think not. I’ll stick to mine @ AUD7 each.

The trick is using the right search term. Search for ‘sensor pocket’ - turns up loads of results here in UK. 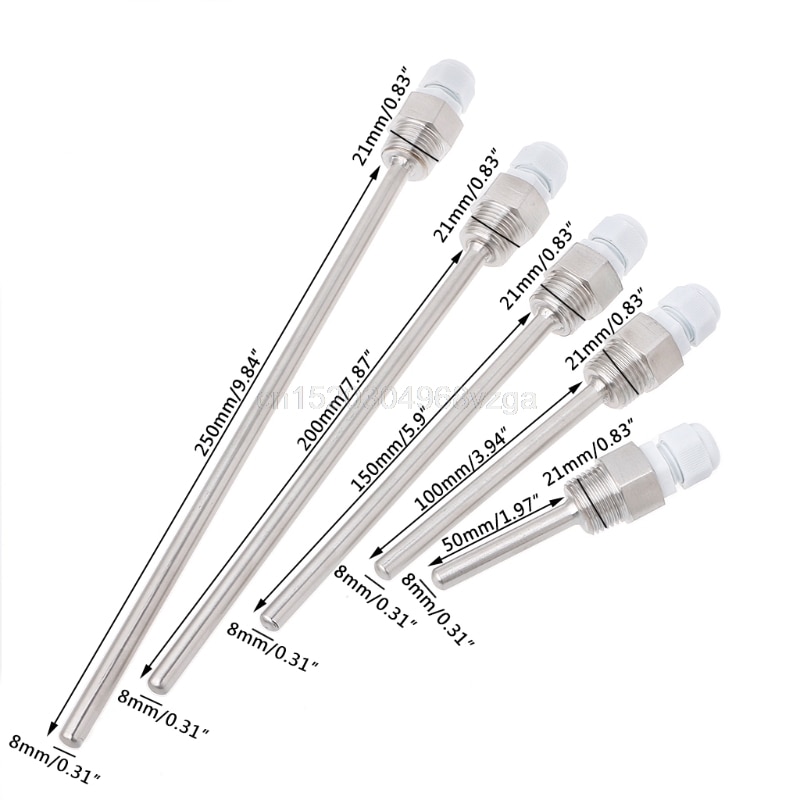 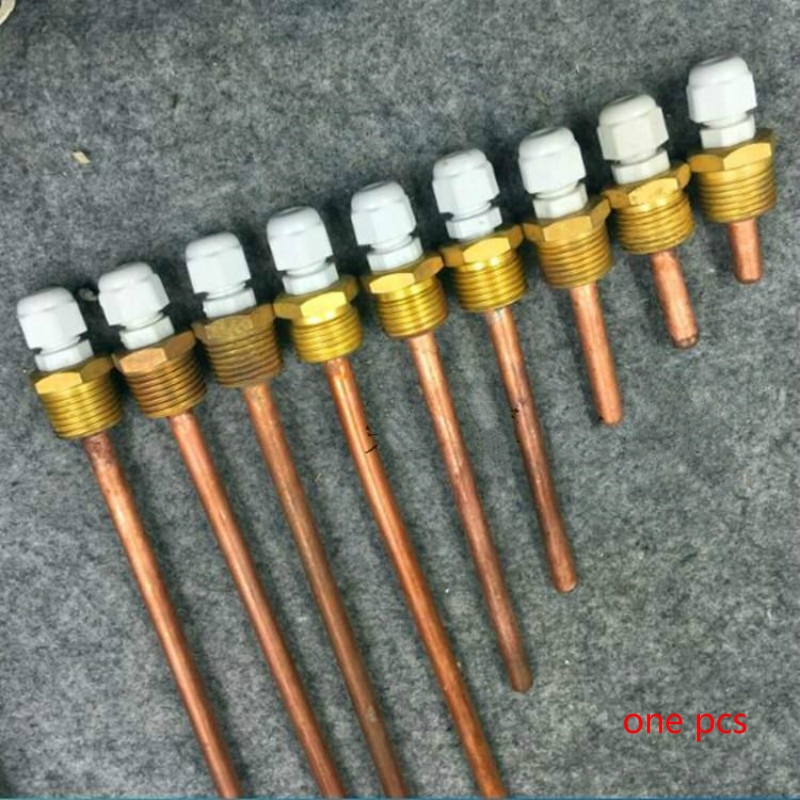 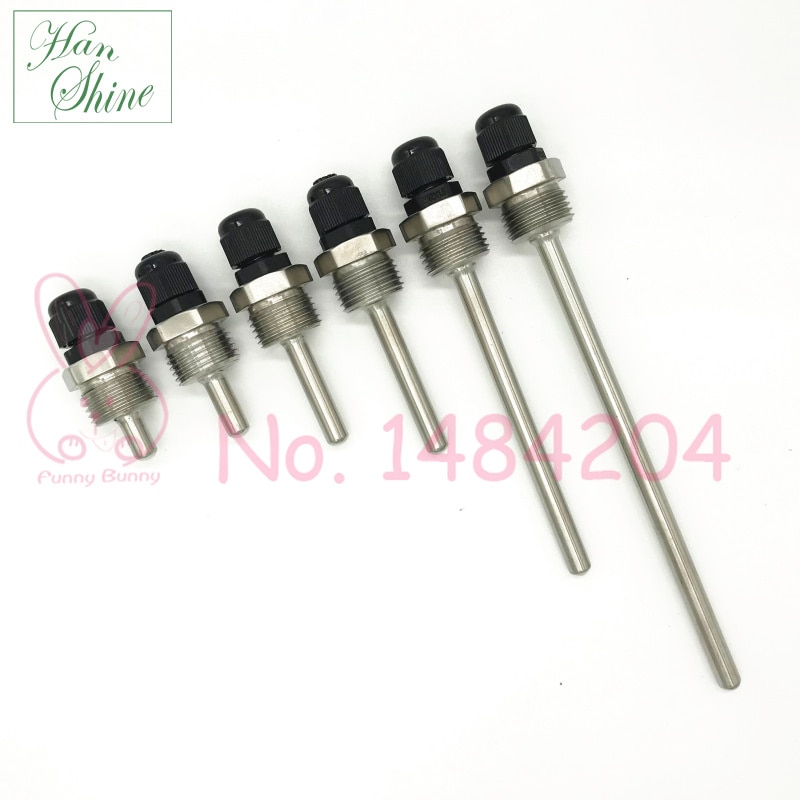 Or even with a ds18b20 already fitted 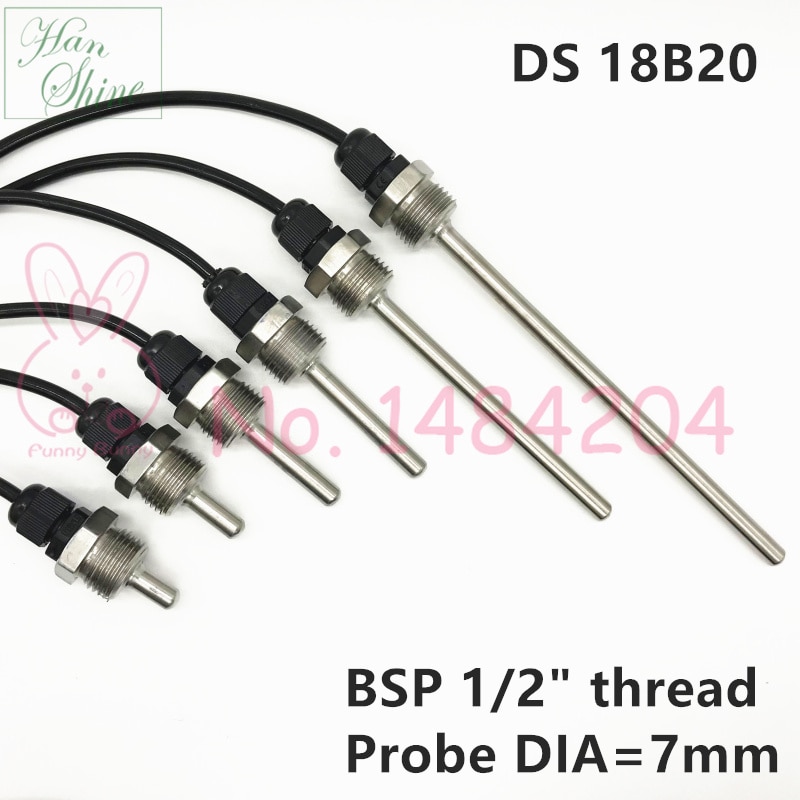 I’m certainly not wanting to take anything away from your ability and achievement @EnergyX, I think its great to be able to knock this stuff up yourself, but for those that lack the ability, tools, parts or time to do so, a ready made solution might be easier so even a general DiYer can still get the job done too.

Ah Thermowell, that is a good search term!

Those prewired ones are absolutely perfect!

If you have a standard glass-lined steel tank, I would suggest caution using even stainless steel thermowells and would not use one made of brass/copper. Electro-galvanic corrosion will occur at a faster rate, which will reduce the life of your tank.

I would suggest caution using even stainless steel thermowells

He should be OK with Stainless. I use SS hardware on Aluminum PV module frames
and after six years in the weather, haven’t seen any corrosion yet.
Few “commonly found around the house” metals exhibit EG corrosion characteriastics like AL.

Edit - Agree with brass/copper being a definte do not use with a Steel tank.

If you have a standard glass-lined steel tank

That depends on your geographic location. UK tends to be SS or Copper for the tanks. Solar tanks tend to have the wells factory fitted rather than leaving a blank boss.

I’d only use these via a Tee inserted in the pipe at an appropriate point.

yes i have done this for my solar PV and also solar hws.
https://emoncms.org/dashboard/view?id=52154

Has there been any progress on enabling multiple external temperature sensors for V2 hardware of the emonTH? I’ve been following this topic (and hoping!) for a long time now!

I’m not sure I understand your question. I don’t have an emonTH V2, but looking at the circuit diagram and pcb layout, the One-wire data and power connections appear on the terminal block, and there is provision in the sketch for 4 temperature sensors. So it would appear that you can have up to four external DS18B20 sensors connected.

Apparently the firmware doesn’t support it. There has been a user-contributed firmware modification to support it (emonTH/firmware/user_contributed at master · openenergymonitor/emonTH · GitHub) but this only supports V1 or V1.5 emonTH hardware (GitHub - openenergymonitor/emonTH: An open-source wireless temperature and humidity monitoring node). @pb66 in post 18 above mentions that it is not “likely to be difficult” to modify the the modification to update it for V2 and you also seem to think it would be relatively trivial in the next post below that. But, alas, it seems that was the end of the discussion.

Unfortunately, as a non-coder, relatively trivial for you is significantly more difficult for me!