Sadly not had the chance to play with one.
Don’t think you have to use the cable - i think you can just direct connect to the power using the points on its board.

I see you were careful to separate analog ground and power ground on the tx4 for better accuracy which is great. But that seems to go out the window if you are powering the tx4 with the external voltage sensing board. In that case, you use a single ground line on the RJ11 for both analog ground and power ground to run the tx4.
I’m just wondering if this is an oversight. Or is voltage sensing accuracy less critical?

Hello @brandon3055 interestingly when the EMC test house we used saw the board one of the comments made was that the separate ground planes was not likely to make much of a difference in our case and that it might be marginally better just to have a continuous ground plane. For the voltage signal it is always relatively large in magnitude compared to some of the small current signals from the CT sensors, so as far as I’m aware so far, it’s not likely to be an issue.

That’s a point I’ve often made here - we’re not too worried about measuring the voltage. Even with the emonVs and its nominal 240 V input, the lowest voltage on this list I can see is 110 V, so the effective range the voltage input should be expected to work over is -60% + 6%. Compare that to the current input, which a few users have expected to work accurately down to -100%

the lowest voltage on this list I can see is 110 V,

I’ve never taken much comfort from the “V is always big” theory. If we were measuring DC or RMS values I’d see the merit, but we’re taking hundreds of V*I samples per cycle, so the dynamic range required for V really is Vpeak all the way down to 0.

How important are accurate V measurements down near 0? It all depends on the load you’re trying to measure. In the vast majority of cases when V is low, V*I is even lower so inaccuracies in V will go unnoticed in Power measurements. But I don’t have to look too hard to find cases around my house where that’s not the case.

To measure that accurately you need to make sure you’ve not introduced any phase errors, and you need to ensure your V measurement is accurate down low.

Not as extreme an example, but still fairly significant currents flowing when V is near 0.

It reminds me a little of the continuous sampling debate. 99% of the time, discreet sampling will work just fine. The problem is that when presented with a power reading, you’ve no way of knowing if it’s a 99%'er or a 1%'er. That’s particularly the case when you’ve discovered an anomaly. Do you pursue it, or do you just shrug and say it’s probably just one of those loads where my meter doesn’t perform so well.

Yes, it would be nice to halve the multiplier resistor chain for the ZMPT101, but at what cost? Money in order to add the link or the extra terminal, and confusion because users in places where the voltage is below 140 V or so need to change something. In your ‘standby’ example, the c.t’s and the v.t’s phase errors will make a much bigger difference than (in effect) shifting everything down by 1 bit and losing 1 bit resolution on the ADC.

And it isn’t as if the voltage is hovering about zero for a long time. The rate of change at the zero crossing is (or should be, unless the voltage wave is really heavily distorted) at its maximum, so the contribution to the error in the average power that two or three samples being wrong by a factor of 2, and nearby samples being wrong by a rapidly reducing factor, will generally be small.

I haven’t done the maths to prove it, but my gut feeling is the error in the current reading will almost always be significantly larger than the error in the voltage; and that’s because it will be a quite special case where the full load current is almost completely reactive. Taking your hob as the example - somewhere around ½ A but almost zero power on standby, 20 - 30 A maybe full load and a power factor as close to 1 as you’re likely to see.

If I’m not mistaken, I think one user is already intending to use the “old” a.c. adapter and a 5 V supply rather than purchase an emonVs. Clearly what is hoped to be, and on paper is, an improvement in the overall accuracy is of lesser consequence to this potential user.

It’s actually a single-burner portable hob on a 10A plug… max power of about 2100W I think.

Thanks @brandon3055, so far I’ve only tested with a single pulse input, as you say it should be possible to extend to more once implemented in firmware.

Can confirm with a little firmware tweaking 2 pulse inputs work just fine. And there is now one more V4 installed in the wild! So far seems to be working perfectly with all 6 CTs and 2 pulse inputs. 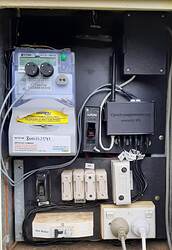 And there is now one more V4 installed in the wild! So far seems to be working perfectly with all 6 CTs and 2 pulse inputs.

Well done and good effort doing all of that off your own back!

Focus in recent weeks has been on the emonPi v2 and end-to-end system testing, alongside trying to work through a packet loss issue with the RFM69 radio’s.

Glad to say the RFM69 packet loss issue has now been sorted, luckily just a register change in the firmware.

Out of curiosity was it the REG_RSSITHRESH register ? Or something else ?

Out of curiosity was it the REG_RSSITHRESH register ? Or something else ?

Hello @alandpearson, it seemed to be due to ‘automatic frequency correction’ (AfcAutoOn) being off, register 0x1E needed to be 0x2C rather than 0x0C. However after further ongoing testing there’s still something not quite right and it’s really hard to pin down. I thought I was narrowing it down to an issue with the receiver board PCB that I have here and interference with the Pi that it’s sitting on top of but it’s still not clear. It takes at least 12-24 hours of a test to see what packet loss rate it settles at so it’s a bit of a difficult issue to debug quickly.

It’s not a critical issue for the EmonTx4 as standard approach for the data connection to the Pi will be via a USB-C cable. The onboard serial-to-usb converter makes this a much neater setup with the EmonTx4.
It’s more of an issue to make sure that’s resolved for the emonPi v2, which needs to be a reliable receiver for all 433Mhz nodes.

I tried different RSSI thresholds and dont think that’s having a significant related effect but it might be good to look into that a bit more. Here’s the latest version of the RFM69 receiver library that Im using and all the registers that are being set: rf69/rf69.h at avrdb3 · openenergymonitor/rf69 · GitHub

it is now looking like we will have stock of the EmonTx v4 and emonVs, towards the middle of September (approx 6 weeks time).

Production has unfortunately slipped back a bit further again, it’s now looking more like mid October. This was partly due to a need to check one issue that came up a bit late on our LDV testing for the power supply, that’s now resolved and the PCB’s are in production with assembly to follow. Apologies for the delay on this!

Production has unfortunately slipped back a bit further again, it’s now looking more like mid October. This was partly due to a need to check one issue that came up a bit late on our LDV testing for the power supply, that’s now resolved and the PCB’s are in production with assembly to follow. Apologies for the delay on this!

We’ve got the next set of prototype PCB’s on order, including a number options that should be useful in the context of our discussions above:

The latest set of PCB’s arrived today. Here’s the Pi Zero W with adapter to mount on the EmonTx4: 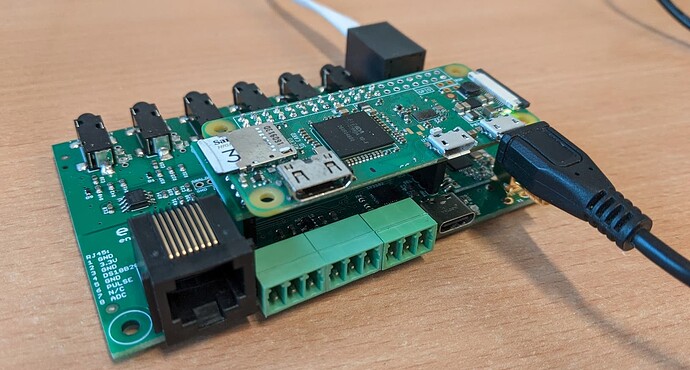 and another adapter for the Pi Pico: 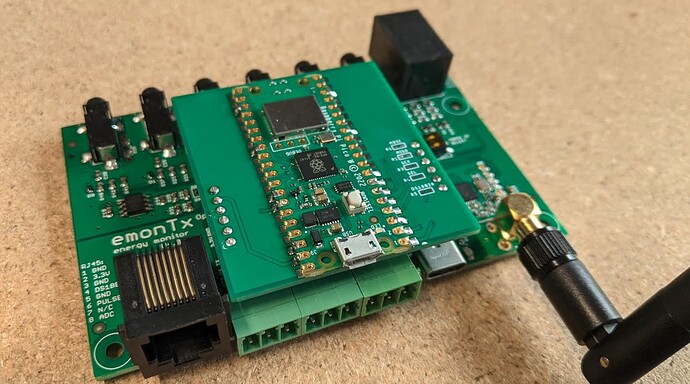 I also built up the single phase precision voltage sensor (without the integrated power supply) and the ACAC Voltage adapter to RJ11 converter:

It looks like the single phase precision voltage sensor without the power supply will be about £28 ex VAT (£34 inc VAT). The ACACadapter to RJ11 converter with an AC adapter is probably ~£12 ex VAT (£14.40 inc VAT), or ~£3 for the converter only.

Hopefully these will provide a good set of options at different price points and capabilities. I think it’s going to be good having the capability to support the different platforms: Pi3/4, Pi Zero, Pi Pico and ESP32 with the adapter boards it should provide more flexibility especially in these times of chip shortages. The intention is to provide the ESP32 and Pi Pico options with basic software examples to start for those happy to compile and upload code and then develop these options further over time. I dont think Glyn has had any luck sourcing Pi Zero’s so its likely that we will only be able to stock the adapter board for those who have spare Pi Zero’s already, at least initially until stock becomes available.

Manufacturing of the emonTx4 and emonVs is still ongoing, I will update with more news on that as soon as we know more.

I think it’s going to be good having the capability to support the different platforms: Pi3/4, Pi Zero, Pi Pico and ESP32 with the adapter boards it should provide more flexibility especially in these times of chip shortages.

I think this is outstanding - well done all.

I dont think Glyn has had any luck sourcing Pi Zero

No I think this is a policy from Pi Foundation, but having the option for the end user is fab!

From the picture, you seem to be powering the PiZero externally. Does the adapter board not pull power from the TX4 board?

[edit]
Is the RFM chip going to be optional? With so many Wi-Fi options, it seems to me that the RFM feature will rapidly become redundant.