What happens when your 3ph supply cable drops the neutral!

My emonCMS setup earned it’s keep over the weekend.

In the early hours of Saturday morning my UPS alarmed, which woke the dog, which woke my wife and ultimately me. When I logged onto to the Pi I found the 3 phases badly out of kilter, L1=285v, L2=172v, L3=285v.

So I called UKPower who quickly responded with an engineer at 4:45am, who checked my figures at the meter, rubbed his chin and said looks like an HV fuse has dropped at the substation, I’ll go down and pop it back in. 30 mins later he was back, substation was 100% fit, so pulled our master fuses and proceeded to investigate, only to find 3v differential between earth and neutral on the supply line. So had to leave us disconnected for safety, and called out the line guys.

10am two trucks arrived, one proceeded to get in the cherry picker to to check the overhead feed (the village is overhead, but with cable down the pole and underground for the last few metres to the meter). Found the problem the neutral line connector had failed due to water ingress.

Unfortunately because it was a neutral failure all four houses that are fed from that underground cable had to have their electrics checked by a 3rd party company before re-connection. Below is the graph showing the point of failure. 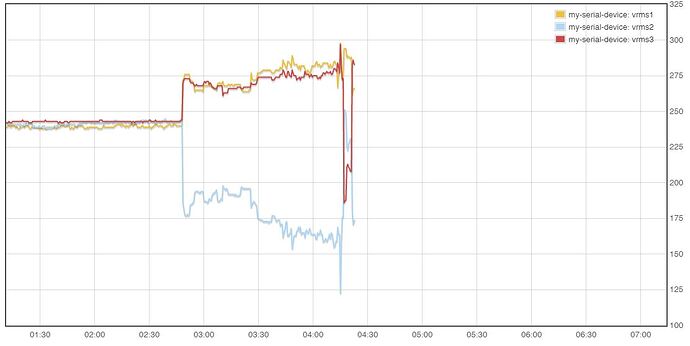 (And this is why I’m always reminding people that the neutral is a LIVE conductor.)

Yes it took out one of our electronic showers (which is attached to L3) and the PSU of my file server even on L2 through the UPS!! Luckily no damage to the disks or controller. Got a replacement PSU fitted yesterday, still waiting for them to arrange shower repairs.

One of my neighbours has a bore hole for water, it took out the pump, she got that fixed today. The other two neighbours had some minor damage to apple chargers, I guess they were attached to either L1 or L3 single phase.

Because the fault was on the public supply UKpower pay for the repairs, hence the 3rd party electrical testing. Their main worry is that there has been insulation breakdown, so they have to do a full electrical inspection checking all the MCB’s and RCBO’s are still functioning properly.