Ian, got to say I’m impressed with the way you’ve presented your support request, providing loads of information to enable this issue to be resolved.
…wishing others would/could do the same!

@Paul - I have an emonPi and I can click in an Update Now button on the Administration page. How does the emonbase Pi (or any other Pi device) do an update?

@Jon - thanks for confirming I was on the right track. Currently running the update - after I worked out how to do the update, as this is the first time i’ve updated from the web interface ! I was on a back level version for a long time (“ain’t broke don’t fix it”) until I updated to the new May 3rd image, so am still getting up to speed on the auto-update features.

@Jon Since I upgraded from the back level code to the current emonSD, I understand I am now running the same image on my RPi /emonbase as is used on the emonPi, so I also have “update” button in the Admin section of local emoncms. I’ve just run the update, now rebooting as requested in the output from update process. root crontab was already looking better

@Paul - I have an emonPi and I can click in an Update Now button on the Administration page. How does the emonbase Pi (or any other Pi device) do an update?

The updates are normally done by git ‘pulling’ any changes from the emoncms repo into the local installation.
Simply SSH into the pi, navigate to the emoncms directory, and issue the command ‘git pull’.
You also have the flexibility to ‘pull’ different branches to test new features, or roll back to known stable versions.
But… it’s not for everyone, Git is a bit of a beast, and like learning a foreign language!

I had that also! Look in the emonhub config near the bottom. The is an [[11]] that needs two line feeds before it!

I clicked the Update Now button (Setup > Administration > Update emonPi > Update Now) and after the emonPi completed the update, its power, VRMS, etc. values stopped updating. I found an error in the emonhub.log - something was parsed incorrectly and the problem was in line 191 (sorry no image). I found a [[11]] that was in need of a line feed or two. [image] After I added the line feed I had to do a sudo reboot the get things running again. Release - emonSD-03May16 Update run on 19 May 20…

Doesn’t seem to have fixed it. Checked emonhub.log, no error about config file, although an odd warning which seems to relate to the RFM2Pi module, but I don’t think that is a problem as log says it’s sending data to emoncms.org:

time to bring in the big guns! I am out of my skill level!
@Paul?!?

It’s late and I need to go to bed, but any other suggestions will be appreciated.

I have searched the forums, and found Some feeds not updating after upgrading 8.4.0 -> 9.6.0 which mentioned time zone setting, which I have never changed, and was still at UTC, but have changed to Europe/London on local emoncms and emoncms.org, but not made any difference. emonhub.log still shows ‘ok’ acknowledgement from emoncms.org, api key matches what is in emoncms.org, but Inputs not updating.

Thanks for your help tonight guys.

there are two timezone settings. One is a command line. The other one is in Setup > My Account > My Profile: 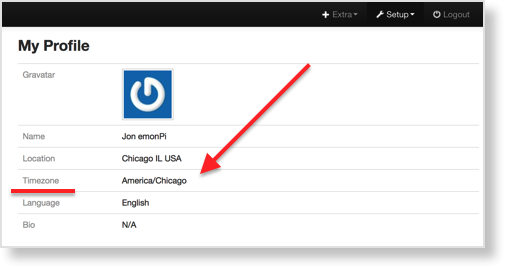 Maybe this one needs to be set?!?

Hi Ian, What model RFM2Pi are you using and what baud is it running at?

although an odd warning which seems to relate to the RFM2Pi module, but I don’t think that is a problem as log says it’s sending data to emoncms.org:

You are right in thinking this appears odd because of the emoncms log entries, otherwise the log simply shows emonhub tries to create an RFM2Pi interfacer with a baud of 38400 and then advises to check the settings for your device as it cannot communicate with it.

so try changing the baud in emonhub.conf if you suspect it could be different (ie 9800 or 57600) otherwise look for a connection / seating issue.

@pb66 Hi Paul, Thanks for your help. I had noticed that emonhub.log did not have the details of packets being processed like it used to, and I incorrectly assumed this was due to a change in logging levels as a result of the update.

As I lay in bed trying to go to sleep last night I reconsidered this, and the warning message about connection to RFM2pi, and wondered if that was the problem. This morning a quick check showed the red led was on solid on the rfm69cw module.

I did a shutdown halt, and powered off the Pi, and after it restarted, it’s all working again. I didn’t change any of the settings in emonhub.conf.

I need to dash to work now, but will be happy to provide any further information later

Hi @IanDavies, sorry to hear you’re having trouble. Agree, thanks for your excellent support request with plenty of info to work with. Also thanks a lot to @Jon and @Paul.

The updates are normally done by git ‘pulling’ any changes from the emoncms repo into the local installation.Simply SSH into the pi, navigate to the emoncms directory, and issue the command ‘git pull’.You also have the flexibility to ‘pull’ different branches to test new features, or roll back to known stable versions.

I had that also! Look in the emonhub config near the bottom. The is an [[11]] that needs two line feeds before it!

This emonhub conf spacing issue should now be fixed with the latest update.

This morning a quick check showed the red led was on solid on the rfm69cw module.

A solid red light indicates the the RFM12Pi unit has crashed. A power cycle should fix it. This is the reason why the emonhub log does not show any received packets. Do you have a newer RFM69Pi or an older RFM12Pi? . This is an ongoing issue, that only seems to affect some users:

This thread is a continuation of a thread started in the old forum A number of users have experienced their RFM69Pi module stopping or freezing, causing emoncms to stop updating it’s RF derived feeds. This can occur at any time, often after weeks or even months of running. My RFM69Pi however has chosen to stop more frequently, making it a good testbed to identify what the problem is being caused by. @pb66 has been the driving force behind solving this, and I’m grateful for his support & help. …

Hi @glyn.hudson I have an RFM69CW (bought from the OEM shop about a year ago) connected to an existing RPi. 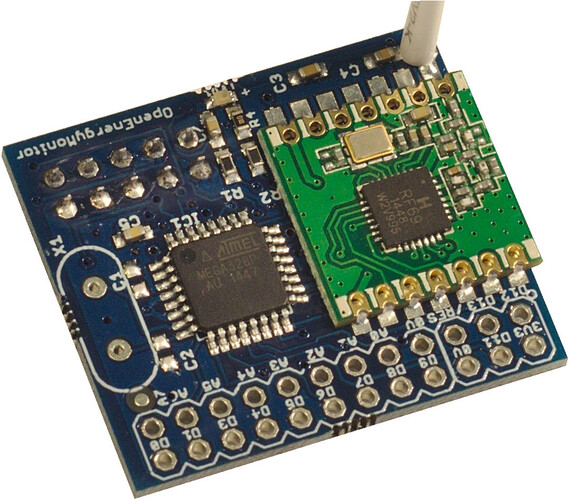 Did a power cycle fix the hanging issue?

Apologies, I do mean rfm69pi - it is the whole unit, supplied from the shop, and yes the power cycle fixed it

If the rfm2pi led stays on that must mean the avr of the rfm2pi has stopped rather than the rfm module just losing it’s settings so please post again if it reoccurs as it is not the same issue mentioned above.

For that issue there are no reports of the led staying on and a simple change of setting resumes the data without a reset, that is unlikely to be possible if the avr is non-functional

Thanks Paul, i’ll look out for that and post if it happens again. As this solid LED condition only happened after a reboot, and I don’t usually reboot very often, I hope it won’t happen again.

However I used to get problems that were similar to the issue where traffic just stopped whilst the Pi was active, and I had been following the thread on the old forum, but as I was on and older emonSD from 2015 I was waiting until I upgraded to test the scripts for detecting when traffic stopped and automatically nudge the rfm2pi back into life.

I’ve had enough fun this week with /var/log filling up (solved) and lwrfd not starting (not yet solved) that I haven’t had chance to re-read that thread and test scripts! Hopefully will do soon.