I thought people here might be interested in my side project for the past couple of years: Taransay. I’ve used OpenEnergyMonitor hardware since around 2013 or so; I got an early version of the emonTx, emonTH, emonGLCD and the little receiver that connected to a Raspberry Pi 1 (emonBase?) and ran the emoncms forwarding service to my own emoncms instance on a private server. This worked well for a number of years, but with the hardware I bought using the 868 MHz RF modules instead of 433 MHz and thus semi-incompatible with the newer OpenEnergyMonitor stuff, and my desire not to have to buy an emonPi to get the newer sensor hardware plus continuing backwards incompatibilities with the emoncms software, I decided to go my own way and make my own hardware and software. The result is the Taransay monitor: 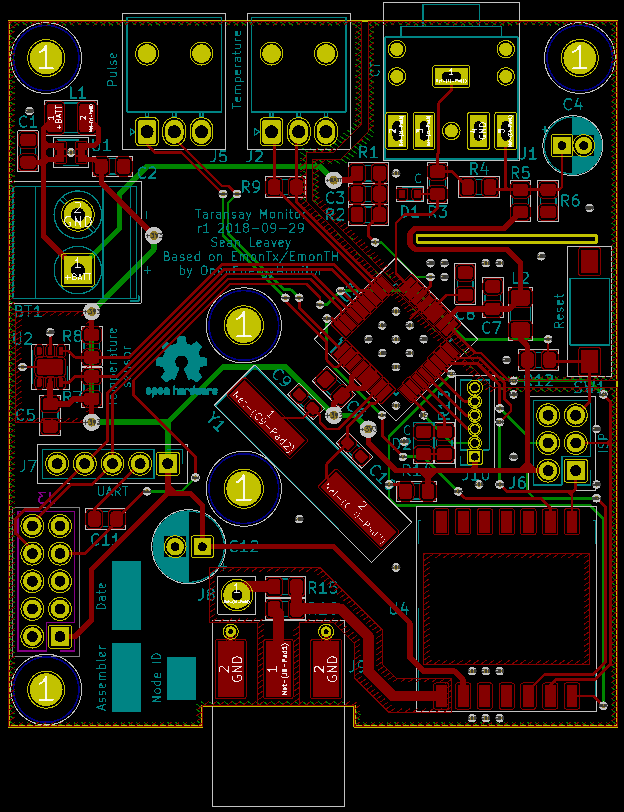 The board is roughly based on a combination of the emonTx, emonBase and emonTH. In fact, the board, depending on its configuration, can act as any of those boards. The board is a size that’s compatible with a Raspberry Pi hat: the header on the bottom left connects to a Pi (any normal sized version; I’ve tested on the v1 and v4; should even work on a Zero) and there is also a gap on the board for the camera cable. It can alternatively be powered via 2 x AA or AAA batteries and used as a wireless electricity, temperature and humidity sensor or pulse counter. Having the board support all of these configurations means you only need to buy one type and configure them the way you want in order to get any of the original emonTx/TH/base capabilities.

Here are two built configurations: the temperature/humidity sensor on the left, and the same on the right but with added electricity monitor capabilities: 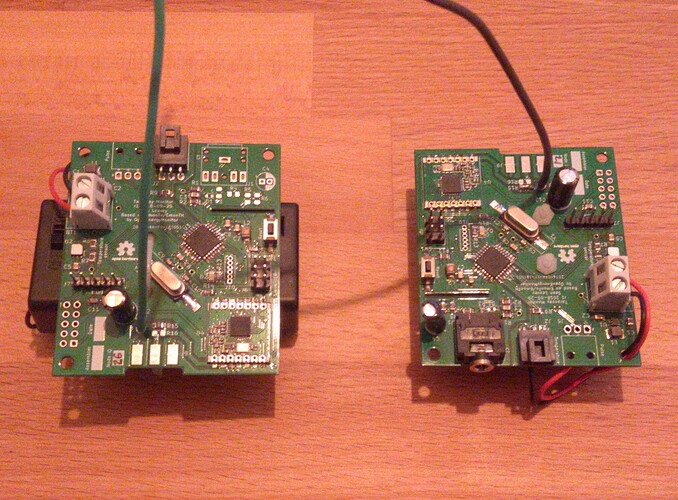 The main practical difference to the emon hardware are the connectors - I don’t like the headphone jacks used for the emon DS18B20 temperature sensors, though I kept it for the electricity CT sensor. The boards are designed in KiCAD.

I also wrote a software stack. The firmware is loosely based on the emon firmware; mainly borrowing the RF payload stuff but ditching a lot of the rest to simplify things. The ports on the ATMega328P are different so the actual emon firmware is incompatible. On top of the firmware is the data forwarding service on the Pi and remote web logging/plotting capabilities, explained in more detail below.

Configured as a base station the firmware forwards packets over serial to the hub software on the Pi, like an emonbase and emonhub. I initially configured the hub to send to my private emoncms instance by replicating the emon packet structure, but I recently decided to replace this with my own software to simplify things and remove the emoncms dependency (I don’t like it). This is still a work in progress but I can briefly describe some parts I’ve worked and am working on:

Anyway, the hardware is working basically as I want it after a recent revision (the headphone jack was on the wrong side!). The original hardware I actually finished in 2018 and around 6 of these units have run continuously since then only needing battery replacements now and then. With decent batteries, a temperature sensor can last about 1-1.5 years - so rivalling the emonTH (I copied most of the battery life performance firmware features).

The hub, data and database code needs a bit more polish but is working. Plotting definitely needs work, but of course the data is there in flat text form already and can be plotted using whatever tools you would normally work with: Python, MATLAB, Excel, whatever.

If anyone is interested I can find time to write up some more instructions for setting this all up, produce some Gerber files for board manufacturing and so on. And if anyone has any suggestions (or criticisms), I’m happy to hear them!

Theres a lot of effort gone into that, well done.

I agree with Stuart… this looks awesome! Absolutely no criticisms from me. I also have been running a setup from about 2014-15… I think. It just sits in the corner doing its thing with no problems. The only thing I have done is change out the old DH senseor with the Si7021 and reflash the hex file on the EmonTH.
Unfortunately im a hardware person and have no skills in software. A while ago I asked if anyone had managed to add any other environmental sensors to the EmonTH like UV, air quality, light, sound etc, but nothing came of it. You seem to know what your doing and I was just wondering if you were planning to add any of these to your design in the future?

Thanks both for your kind words! I don’t really have plans yet to integrate more sensors, but I don’t see any problems with getting anything else to work with the system.

I actually started to play with dust sensors a while ago and made an ethernet-connected box with some sensor I got from China off of eBay along with a light sensor and a Bosch temperature, pressure and humidity sensor (BME280). The design files are here, but I didn’t document any of it unfortunately. I took a different approach with that board, avoiding trying to use the OpenEnergyMonitor stuff and used my own ethernet PHY and programmed a basic HTTP stack. It was tough getting it all together (HTTP is hard) but in the end it did work, though it suffered from a pretty fatal flaw that the dust sensor produced so much heat that the temperature sensor really only sensed that, not the room, even though it was on the opposite side of the enclosure. The dust sensor was also hard to calibrate. The sensor gives out two numbers I recall, which are essentially “counts” - the number of times a shadow sensor sees a big enough drop in signal from dust passing its screen. It doesn’t do any kind of binning like a real particle counter does (e.g. by particle size), but playing around with the thresholds (after reading someone’s blog post) I was able to figure out how to separate particles into arbitrary “big” and “small” categories. If I continued to use it I would have had to figure out by observation what these counts correspond to in terms of smoke, pollen, etc.

That project is gathering dust (hah!) but maybe eventually I’ll get back to it, probably for more weather-related sensors rather than dust. I still have a few of those dust sensors though (they were pretty cheap), so maybe.

Nice work @sean looks really tidy! and a great effort to build your own software from scratch as well!