I’m probably being really blind, but although I can see plenty of articles converting a power reading to an energy usage reading… I can’t see anything that gives the reverse conversion.

I have a pair of optical pulse inputs, both pulse per kWh.
That’s fine, and I trust and can read the graph generated - but I would like to get a graph of the power usage, even if averaged over 5 minutes.

When I try to create a visualisation with a histogram the values don’t seem to match what I expect - in particular the “power” values of the histogram vary wildly as I change the bin period, which isn’t what I expect a histogram to do at all.
|'m clearly doing something wrong, I just can’t see what at the moment.

Basically, what you’re asking for isn’t possible - given that a pulse represents a fixed-size packet of energy. It’s for that reason that we normally recommend using c.t’s for power measurement, and only use the energy pulse count for calibration of that and as a check on the accumulated energy.

Going a little further into the details, the time base for emonCMS defaults to the rate at which the data is received, which is every 10 s. Therefore, the value you get for power is the energy in pulses over the last 10 s, divided by that 10 s interval. It does not store the absolute time when the last pulse appeared and then use that interval.

This illustrates the problem. The blue line is power by current and voltage measurement, the yellow by pulse rate. One pulse per 10 s being 720 W. 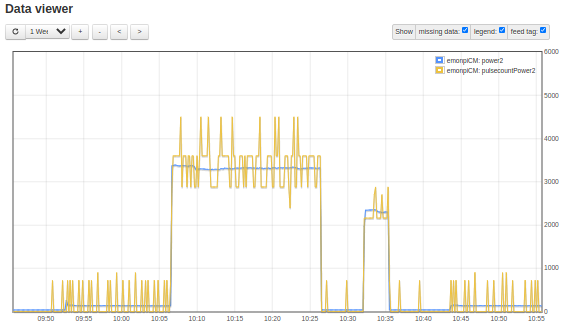 There would certainly be errors at low power levels, but that shouldn’t detract from the overall shape of the graph. Indeed your power line looks pretty decent to me - I can do the smoothing in my head.

There will be noise based on the 10 second sampling, but that’s OK.

You’ve clearly managed what I haven’t and have a feed? called pulse count Power…

Ah, you were looking in the wrong place. Feeds are essentially storage. Inputs is where the maths and other processing is done.

(There are exceptions of course - e.g. post processing - but those are largely correcting something.)

“I’m clearly doing something wrong, I just can’t see what at the moment.”

Give the massive amount of information on this site, you’re not the first one to not find something, and you certainly won’t be the last. I put those few words to give you a one-line general hint as to what each page did. There’s no need to feel bad about it, I can take hours or days to find something, and I’ve been around here since some time in 2012, I think.

I appreciate them - as I hope will the version of me that finds this thread via google in 6 month time.

If you click on your icon (next to your name) and then again in the pop-up, that will take yo to your account, and under “Activity” you’ll see a list of your posts.