I’ve searched this up a bit on the forum but not found anything that matched this.

So during the day, the CT attached to my solar seems to read correctly, I have a display on my inverter and generally the reading I am getting in emoncms is within 1-2% of that reading.

However, during the night, the reading for my solar stays positive and at almost exactly 70W - all night. It’s not negative as some people have suggested it should be, and it’s basically a perfect 69-71W the entire time it’s dark, and then as soon as there is light again the readings become correct once more.

Does anyone have any idea why this is happening? Clearly I could deduct ~70W from the input CT but then I would be seemingly underreporting what the solar is actually generating.

Is this probably some hybrid inverter with a battery attached and you are measuring the power consumption of the inverter?
What make and model is the inverter in question?

If I was measuring consumption of the inverter though wouldn’t the reading be negative?

The inverter looks like a normal grid-tie one, so there shouldn’t be a significant consumption during the night.

The sign of the measured power doesn’t change and shows 70W “solar production” during the night?
That sounds really strange. Could you make a photo from your CT with the wiring?
Which type of setup do you use? Type 1 or Type 2?

If I was measuring consumption of the inverter though wouldn’t the reading be negative?

The first question is, do you have an emonPi, is that where your emonCMS is?
The second, do you have the “standard” Solar PV bundle, i.e. the emonPi, two c.t’s, a.c. adapter and 5 V d.c power supply?
Did you connect both c.t’s and the a.c. adapter before you powered up the emonPi?
Where are your c.t’s located?

The difference between a Type 1 and a Type 2 installation is the Type 1 can work without the a.c. adapter, because you know the directions of power flow - if you accept the overnight “keep alive” power that the inverter draws - normally just a few watts, will appear as generation. However, if you haven’t got the a.c. adapter, the emonPi will revert to using a guessed constant voltage and measured current, but this will give the apparent power. I wouldn’t be at all surprised at 70 VA (~ 300 mA) for the “keep alive” power (which it isn’t, the power factor will be well below 0.2), and because we cannot know the direction of power flow, it is always positive. And this will be the same, whichever type of installation you have.

My conclusion is, either you’re not using the a.c. adapter, or you connected it after starting up the emonPi (in which case it will ignore it), or it’s faulty.

It’s a type 2 setup and the CT was added by an electrician as they were doing some other work anyway. Attached are pictures of both the import and solar CTs (note the cable on the solar CT has been routed differently since that picture but the CT itself has not moved). 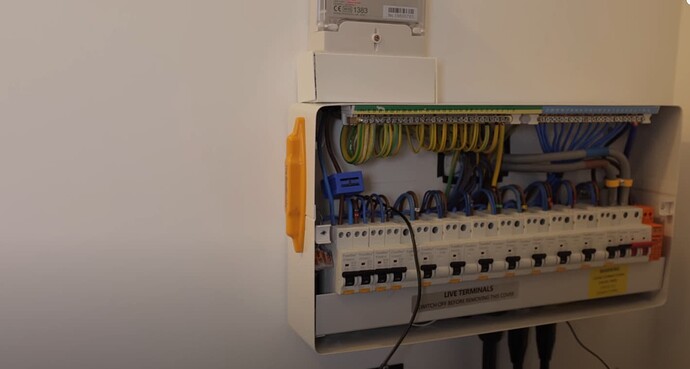 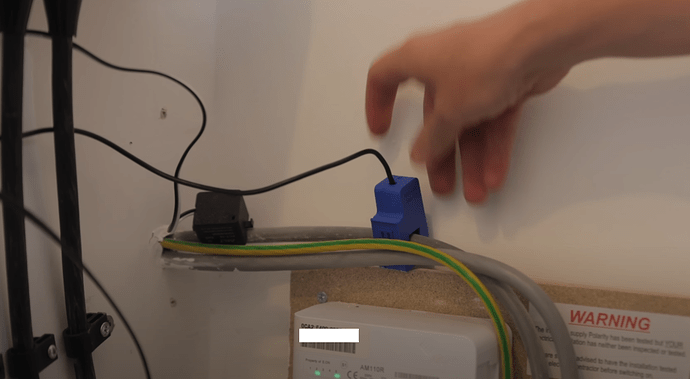 The first question is, do you have an emonPi, is that where your emonCMS is?

Did you connect both c.t’s and the a.c. adapter before you powered up the emonPi?

I actually don’t know as an electrician connected the CTs and by the time he asked me to come and check things it had already been powered on. Should I try fully turning it off and back on again?

I do get a reading of 230 coming from the “vrms” input, if that means anything.

I do get a reading of 230 coming from the “vrms” input, if that means anything.

If it is never anything different, then YES - it means the a.c. adapter isn’t doing its job.

Should I try fully turning it off and back on again?

Yes, but you MUST follow the proper shut-down procedure. You can do it one of two ways, either via the button on the emonPi, or via your web browser, the Setup menu → Admin, and near the bottom are two buttons, Reboot and Shutdown. Reboot is not enough, that only reboots the RPi; you must do the full shutdown. In both cases, leave it for 30 s to do its thing, remove the power to the emonPi, then power it up again. That will re-start the “emon” front end energy monitor (a separate processor to the Pi) and you should then see something other than a constant 230 V. And hopefully something like -5 – -10 W overnight consumption.

Thanks for your help - I think this might be it then. It was reading 230 constantly, I just followed the procedure and now it’s reading 235.6

Will check things later on when it’s dark as well to confirm.

This was definitely it, solar is reading exactly 0W now and it’s never been below 69 before - thanks again.

This was definitely it…

+1 for marking the solution. (it helps others if they search the forum for a similar issue)