I have a Rayleigh Instruments RIHXE12 Meter as my solar generation meter, This is being monitored a pulse counter and is connected to my emonpi.

I have noticed that the pulse count from the Meter increases faster than the display shown on the meter itself.

Whilst the system is off overnight, and the solar panels are not generating, there is approximately 1 pulse increase each hour.

Any ideas what could be causing this? 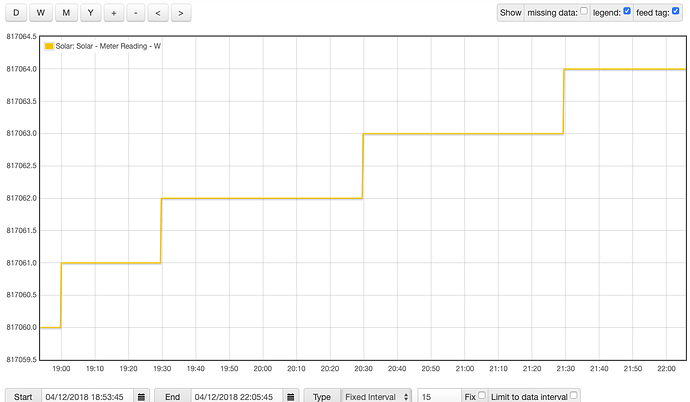 I think you need to carefully check exactly what your meter is doing.

It’s likely that your inverter is consuming energy overnight in order to stay alive, in which case the meter might put its LED on continuously. I suspect it’s ‘blinking’ every hour, but I’ve no evidence for that - I think you need to establish when the next increment is due, and watch.

Given these are 1Wh pulses and the display for the meter is only to 10Wh it is not easy to spot anything going on.

I am sure I read when the panels were installed that the LED was only for ‘import’ electricity (solar generation), however re-reading the manual I cannot see that in the manual online now.

Assuming the LED does also indicate reverse usage, It could be the internal usage of either the meter, or inverter use. I will email Rayleigh and see what they asy about it.

It looks like I might need to do something with a multiplier with pulse count addition in emoncms to prevent it from incrementing the counter when the solar inverter is not generating.

Are there any other sources of light close the the meter which could be effecting the pulse sensor? Assuming you are using the optical pulse sensor from our webstore?

Meter is in the middle of the loft so generally dark all year round. (Circa 3m from any edge and the only light in is through the vents facing straight down, so bath for direct sunlight to enter the loft anywhere)

Tried putting blue tack round sensor just in case, but it’s a complete clear plastic front so won’t be as beneficial as I would like!

I don’t suppose there’s anything else in your house that comes on every hour, on the half-hour?

This is only between the solar inverter and the main consumer unit, so nothing else in the house should have any effect on it at all.

I have a separate emontx monitoring household usage at the main consumer unit, and there does not seem to be any spikes or transitions related to the same time the meter reading is incrementing.

Sorry glyn, yes the pulse counter is the one from the web shop.

At the moment I don’t have any data as to if the problem is caused by the Meter itself, the pulse counter, or the emonpi.

I will wait and see if Rayleigh come back with anything.
I will also turn off the inverter at the isolator overnight and see if that stops the increment of pulse counts.

The other option I have is to look at is the pulse output from the meter, I have seen one other thread that suggests that it is a volt free contact and can be fed directly into the emonpi instead of the pulse counter.

My understanding is not many meters emit a pulse under reverse energy flow, most put the LED on continuously at below the creep setting forward, and always for reverse energy. But that doesn’t mean yours doesn’t.

What I find hard to believe is it’s something not related directly to the meter, on account of the exact timing. But it could still be coincidence. It’s going to be interesting to see what happens with the inverter isolated.

Your expectation of the meter is the same as my expectation when it comes to the LED indication.

From what I have read, if the meter has power, the LED is on and the produces an 80mS off pulse for every Wh measured.

I had forgotten that the meter was upstream of the inverter isolator, therefore when I turned the inverter offf the meter has been turned off too, and so the LED turned off. (And the emonpi reporter measuring 3 pulses).
So this may not be a fair test, at the same time it is testing the emonpi and pulse counter aspect of the system to confirm the source of the problem.

I will try this overnight and see what the result is, if that is good then tomorrow night I will then try just removing the power cable from the bottom of the inverter as there will be no current through the meter, but it will still be powered.

Just one observation on timings:
It’s not perfectly every hour or half hour

This evening 10pm it is running about 44 mins past the hour. 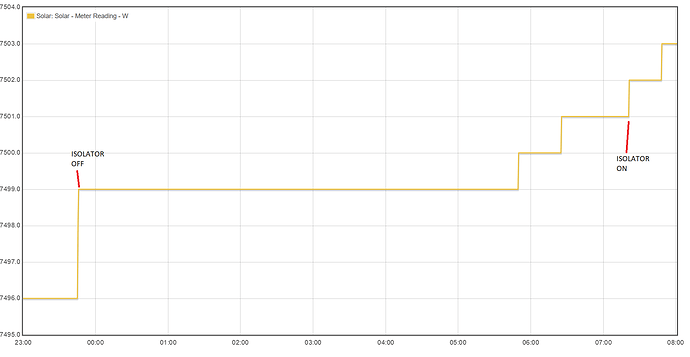 It’s not perfectly every hour or half hour

That was before you isolated the meter, presumably?

This evening 10pm it is running about 44 mins past the hour.

So it’s something that has either drifted that much, or its ‘clock’ has been restarted during the day?

Does the meter really leave its LED on continuously, and give you an “off” pulse – even when you’re generating? I’m wondering whether it indicates energy direction by having an “on” pulse for one way and an “off” pulse for the other way? That’s something our software doesn’t distinguish - it just counts one edge (I can’t remember which offhand).
The Pi reporting 3 pulses as you isolated it could have been its death throes – in which case it doesn’t mean a lot.

I did another test over the weekend and left the isolator on, but disconnected power to the inverter.
(connection: mains > isolator > meter > inverter)

When the isolator was turned off, the Meter and therefore the LED turned off, and there were only 2 pulses detected overnight.

I then left the Isolator on, feeding the electricity meter, but nothing connected to the other side of the meter, and it was the similar as leaving the inverter connected, but now 1 1/4 hours between steps. 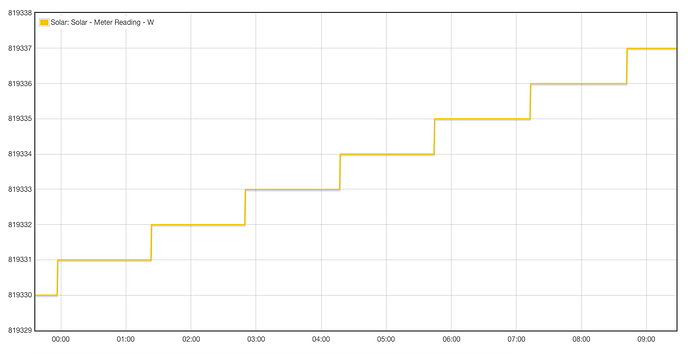 Its either something that is running an almost perfect 1W power consumption (0.75W for the meter and 0.25w for the inverter?)

I still haven’t had a response from Rayleigh yet.

If you disconnect the pulse sensor for the emonPi does this stop the pulse counter incrementing?

I will unplug it in a minute and plug in in the morning and report back.

It is pretty much the same as turning the isolator off,

I still get 1 or 2 odd steps near 6.30am, but not worked out what is causing those yet. 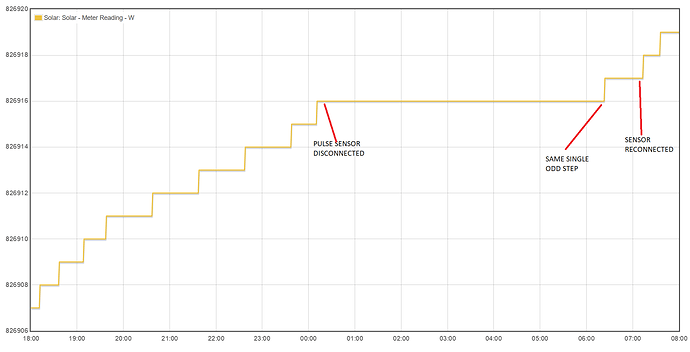 I need to have a more detailed look at my node-red scripts, but I dont think there are any that are localised around just that time!

At the moment, looking at the fact there is a difference in interval with the inverter connected or disconnected, it looks like the “export” energy on the meter is logging the consumption of the electricty meter and the solar inverter when unpowered.
(Solar Generation = import on the generation meter),

Odd, I think the next challenge is to disable the pulse increments in emoncms.org when the inverter output is 0W … looks easier said than done … any ideas?

Is it possible to solidly ground the pulse input after you disconnect the pulse sensor? That should rule out the possibility of electrical interference generating the spurious 6:30 am pulse.

Can you post some emonhub.log for a period of time leading up to, during and after a/some random pulse(s)?

The raw pulsecount from those logs will confirm conclusively if the random pulses are generated pre-emonhub (hardware/firmware) or post-emonhub (emoncms/nodered etc).