Hi,
I’ve got an emonpi and an Open EVSE and I’m having trouble getting the solar divert to work. The EVSE reports waiting for solar and charge rate 0A but is actually charging at 32A. The MQTT setup seems to be ok and the solar PV divert is set up to Feed*:Grid (+I/-E) with the correct MQTT power topic (as evidenced by the Status page.

What am I doing wrong? 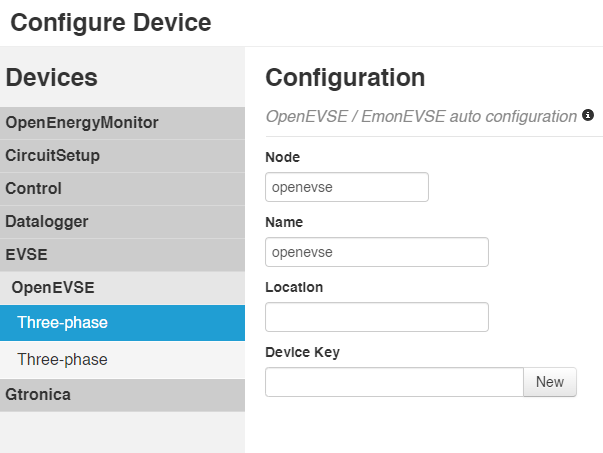 The charging session has only been running for about 3min, the default minimum charging time is 600s (10min) 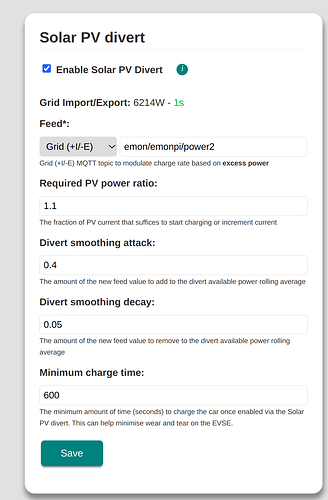 Grid I/E should include the power used by the EVSE.

Thanks Glyn- the question is why is it charging at 30A rather than waiting for solar?

I changed the power2 to power1 btw! 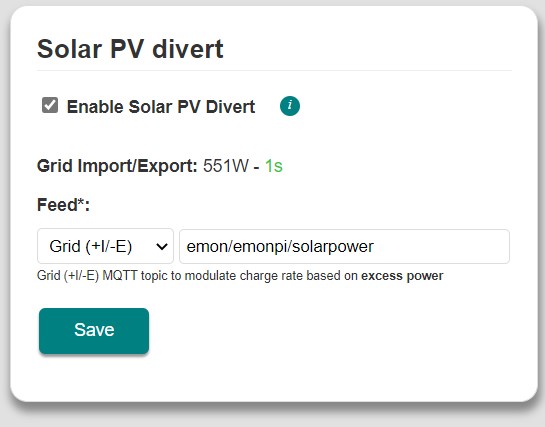 This may or may not be relevant.
I have found that if I have a power outage with the emonEVSE in solar divert mode that the web interface shows the device to be in solar divert mode, but it I think it actually starts up in normal mode, which results in charging at full rate when there isn’t any solar. The fix is to toggle the charge option back to normal and then to solar divert. If that doesn’t work restart the OpenEVSE in the hardware section.

I changed my system from WIFI to wired ethernet and buyed th eLAN gateway.
Therefore updated to the new firmware 5.1.0.3.p
I built in and got connected and could load.

But i have also a MQTT setup for PV divert.
This showes the same problem for me.
The MQTT Topic for Grid Import=+ / Export = - show a positive value and is actualisied.

The station should load at 5 A

but loads always with 14,96 A . Even i change the load modus to normal and back to divert.
I also tried to set the minimum charge time to 0 .
Alway loading with 14,96 A

Is there an explanation for this ? or doing i something wrong ?

After toggle to normal mode and back to divert mode and hardware reset as adviced i have the following status: 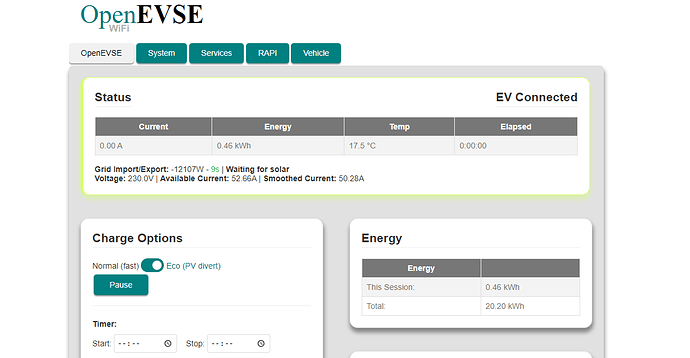 Waiting for solar … But there is enough

If I recall correctly, I had something similar and it was because there was Demandshaper setup for the EVSE device in the local emoncms.

I had to disable it before PV divert would work correctly. Worth checking I guess.

Probably a post somewhere in the forum about it.

Noticed that i´m on an too old firmware from the the openEVSE controller.
So i will try to update this before and than with the new LAN interface it will work hopefully. Will report back afterwards

Now i have buyed programmer (PoluloV2.1)

and installed USB drivers for it.
Downloaded WIN AVR and installed.
Found the actual firmware on github
https://github.com/OpenEVSE/open_evse/releases/tag/8.2.0

But how i can find the described 3 other files:

As i´m not familier with github it would be nice if somewhere could help out.

As i´m not familier with github it would be nice if somewhere could help out.

The recommended way to flash is using avrdude:

Avrdude works easily on linux, I have no experience using it on windows. I’ve heard some people use win AVR on windows: How to Load OpenEVSE Firmware (WinAVR) - OpenEVSE