Hi There - I’ve had my emon setup for a few weeks but was waiting on the AC-AC adapter to come in to ask any questions. I took the system down this morning to install the adapter, which is when the graph changes. Previously the daytime consumption while solar was producing had the consumption/export swapped.

I am running the new emonPi (plastic back). Not sure if there are any other version info points I should add?

I have got it plugged in now and the addition of the AC-AC seems to have dropped the solar to 0W and is giving me a negative consumption info. The values in the feed section seem to be correct, but they aren’t translating into the MySolar app.

I assume I’m doing something noobish, but can’t figure out what is going on. Would be great to get some input / assistance. 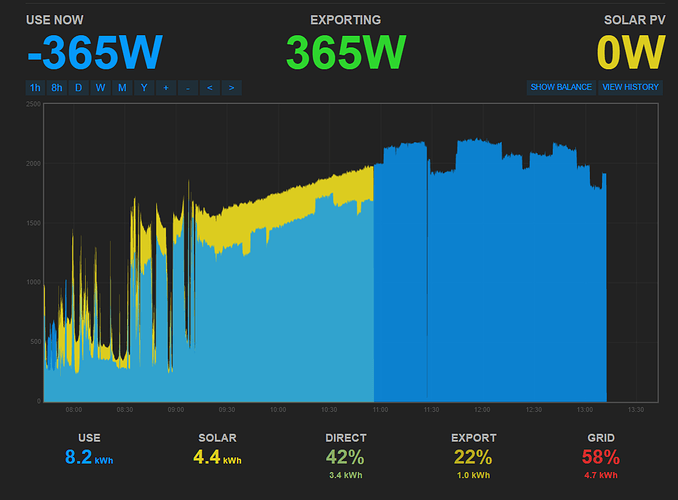 Have you got the CT the wrong way around on the cable?
Try changing it around.

In any event, the solar production reading should be positive, and not negative.

When you’ve added the power adapter, it’s allowed the emonpi to determine the phase of your CT inputs, and now thinks that you are using instead of generating.

Another thing to check is if you correctly identified if you have a type 1 or type 2 solar setup.
I got them mixed up and had a similar effect.
See this diagram in the solar setup guide.

Flipped the CT and also had to change from type 1 to type 2 and it’s working sweet now. Thanks guys.