Hi
I just installed on a Raspbian Buster the suite with the automated script but encoutered many problems.
Installation did not create the var/log/emoncms so could not write errors encounted. Scrolling the log it appears it did not create also var/www/emoncms so it did not pulled the web content.
Retrying the installation script did nothing and after manual pull from git i can see some content but im missing most of the menu items (see image)
emonhub is working and showing inputs reads but i’m missing all the apps from menu and even the Admin interface.
Can someone please help? 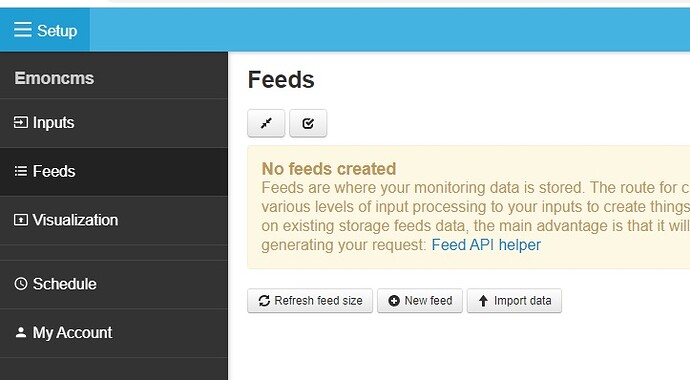 Hi Mike, welcome to the community.

If you’ve got inputs, it may not be as bad as you think.

You have to create feeds from the inputs yourself, Maybe start here?

Not sure why you don’t have admin though, maybe someone else can help?

I’m not sure how the scripts differ from the pre-built SD card image, however some while ago some modules were optional, and you might be missing one of more of those.

Is there a particular reason why you used the script rather than writing the image to the SD card?

I think @glyn.hudson, @TrystanLea or @borpin are best placed to help you. If there’s an error or an incorrect assumption in the script, it needs to be corrected.

I just installed on a Raspbian Buster the suite with the automated script but encoutered many problems.

Was this a barebones install on a fresh Raspbian OS, or are other things installed?

Hi
For anybody who might need the information, i had to reset the database for the admin menu to appear. Even if i created a second user from the first one, it seems like any user who is not the first can’t see the admin menu.

I didnt use the prebuild image cause i already have an installation with a bit of scripts and automation so i didn’t want to redo that again.

I also had to stop demandshaper service as it continously crash for missing file “Modules/devuce/device_module.php”. That file is in the install/device forlder but seems it has not been copied in the right path.

It appers the main install script has failed in many places, if i wont be able to bring it up ill give a try to the prebuilt image.

I didnt use the prebuild image cause i already have an installation with a bit of scripts and automation so i didn’t want to redo that again.

The script instructions clearly state to start from a fresh image. There is no telling how the other installed things will interact.

There are also other tasks required to prep the Card to prevent premature failure.

It appers the main install script has failed in many places

No, it hasn’t as it is designed to install on a bare system and you have not used the script in the correct environment.

It was a bare install. Customization was to set interfaces addresses, add a few script files for home automation (to piliot the gpio ports), that’s all.
Also followed the guide to prepare the sd card with the additional partition.
I still think the automated install script needs a review.
I am not a fan of premade systems as you dont really know how safe they are. Should have used one of the manuals online to install the single components one at a time, some are well made.