How to combine two phases in MySolar

I have an Iotawatt feeding data to emoncms. We have a split phase system where phase one feeds the house and has the PV system onit, and phase two has all the outbuildings. I have CT clamps on both phases reading import/export on phase one and import on phase two.

With Mysolar, it takes the import and export from phase one but I would like to add the import from phase two to give an accurate view of my total grid import use. Could someone check my feed setups please to make sure I’ve configured this correctly. Thanks.

This is a good use for Virtual Feeds.

At the bottom of the feeds list, click “new feed” and then “virtual feed” and set up with a suitable name.

Select the new feed and click the spanner icon at the top. Set up the virtual feed to combine your import feeds into one combined feed.

Set up the MySolar app to use this new feed as the use.

Repeat for the other feeds.

Ah perfect, I hadn’t discovered those. Just the job, thanks very much.

Hmmmm, I don’t seem to have an option at the bottom of my feed list to add another feed, just buttons to ‘refresh feed size’ or ‘select all feeds’

Are you using a local instance of Emoncms?

I’m using emoncms.org not a local instance and my feed page looks like this 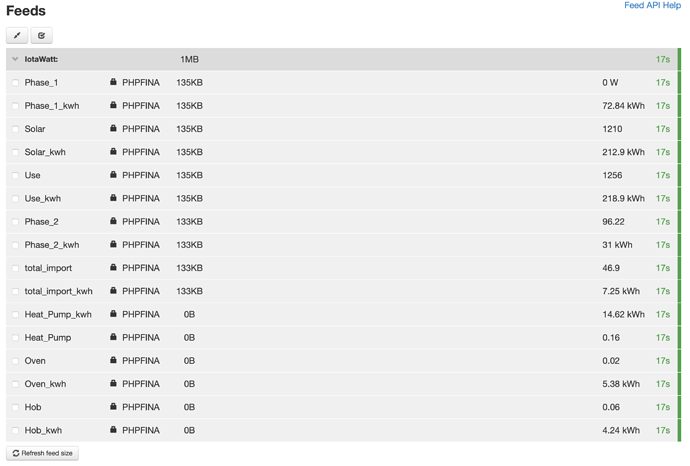 Ok, emoncms.org doesn’t have virtual feeds. However, you can do multiple steps with an input through it, like this:

Basically, you can add some extra steps to combine one input with another, and generate an extra feed. This achieves the same as the virtual feed.

I started my own local instance of emoncms because my feed count was getting high, and even at £1 per feed per year it was going to get pricey.

Hi Tom, sorry for the delay, I’ve been away for a week or two. Thanks for the info, like you I think I’ll be looking at a local instance of emoncms in the near future, currently considering whether to buy a pi just for that or create a vm on my old Mac mini which I use as a print and media server connected to a NAS.

Not that I know much about it, but setting up emonCMS on anything other than a Pi can be quite tricky according to people who have reported their experience here. If a RPi is available, then that’s by far the easiest - just flash the emonPi image to an SD card.

sorry for the delay, I’ve been away for a week or two

No bother - I only caught this update because I am messing about before starting work!

Not that I know much about it, but setting up emonCMS on anything other than a Pi can be quite tricky according to people who have reported their experience here. If a RPi is available, then that’s by far the easiest - just flash the emonPi image to an SD card.

I’ve got it running on a RasPi pinched from my 3d printer, but at some point I want to migrate EmonCMS and a load of other random services off the RasPis and onto a small intel PC of some sort, just for simplicity…

yes, I was thinking the same, why have several Pi’s running different things when a small pc or Mac could run them all on different instances. Looks like more research is needed.