Hi guys, I have a challenge that I can’t solve and I don’t know if anyone ever thought about it: A friend of mine has a 4500W PV mini-generation system that he set up a few years ago to sell power. Lately the sale of KW / h of these systems has been drastically falling and nowadays the value around 0.12 € with tendency to fall to 0.8 or 0.7 next year, while the purchase price is over $ 0.18.
The idea would be to divert solar production to household consumption as a priority and the excess was sent to the grid. There is an important detail: The house has a meter and solar production has another meter, so the direction of the currents will have to be respected, ie if the house needs to consume from the grid then the energy has to go through the house meter but if there is solar production higher than the consumption of the house then the energy must come out of the production counter.
Thanks.

Your friend’s problem is either with your or his understanding of how the meters work, or it might be with how the electricity company charges for and pays for energy.

Where is the solar production meter? I think it must be between his inverter(s) and the Point of Common Connection - the place where the inverter connects to the rest of the house wiring.

And does the Grid meter move when he is exporting energy? I believe it will not. If it increases, then I believe that is wrong and he must check with the authorities.

According to the way I understand things, but remember the rules vary from country to country and supplier to supplier, so you must check the rules for your country and his energy supplier, this means that when he is nett importing (solar production is less than consumption), he will be paid 0.12 € per kWh for all his generated energy which he is using for himself and he will pay 0.18 € per kWh for the additional energy he imports to meet his needs.

When he is nett exporting, (solar production exceeds consumption), then he is being paid 0.12 € per kWh even for the energy he is using.

if there is solar production higher than the consumption of the house then the energy must come out of the production counter.

I think your (or his) understanding of how the system works is wrong. That is not how it works. I think he is paid for the energy he generates whether he uses it himself or whether it goes back to his electricity company. If his Grid meter went backwards when he is exporting energy, he would be paid for it twice - once at 0.12 € per kWh and again by reducing his bill by 0.18 € per kWh.

So what exactly is your question?

Are you asking, is there a way to direct the current down one set of wires (into his house) instead of flowing out into the grid? That will happen automatically.

Or are you asking, is it fair that he must pay the electricity company 0.06 € to “store” the energy for him until he wants to use it after the sun has gone down?

[And @coiso
Please type directly into the edit box here. When you type somewhere else and then copy your post into here, the system thinks you are a spam bot and blocks your post. This is why it did not appear straight away.] 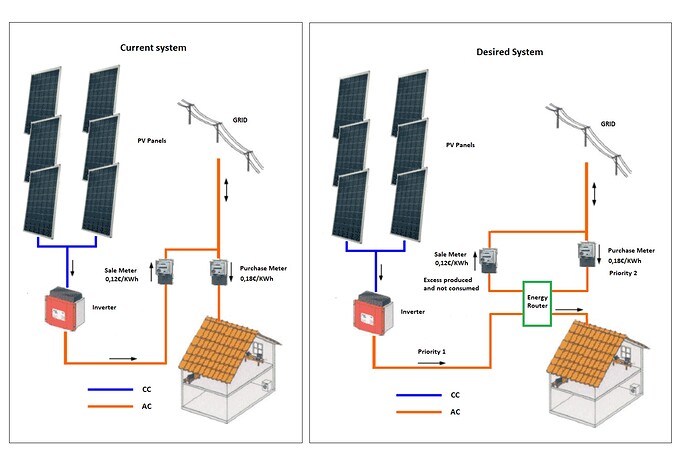 Is your diagram “Current system” accurate? In the UK, the PV input is connected to the house downstream, i.e. on the customer’s side, of the “Purchase Meter”. And the Grid (=Purchase) meter does not register exported energy - it remains frozen while export is taking place, neither incrementing nor decrementing its reading.

Of course the “Current System” is accurate in Portugal. We call UPP (Small Unity Production). Take a look of this explanation: I know the simplest way was to invest in a bi-directional meter but the project was approved at a time when self-consumption was not yet talked about. Actually the production counter is bi-directional because it records the consumptions coming from the solar follower motors but I can’t change that variable. I hope I have made myself understood.
Thanks.

I asked because I am in the UK and not familiar with your rules and regulations.

I think you might need to consult a specialist company in your country to see if there is a solution that is made especially to suit your system.

With the “Current system”, I now understand how your friend is paid €0.12 for PV energy and must immediately buy it back at €0.18 per kWh.

The only easy way that I can think of is to change the wiring in the house so that you can automatically select whether a circuit takes its power from the grid (via the purchase meter), or from the PV inverter (and before the Sale meter), depending on how much PV energy is being generated. The system would need to optimise the choice of circuits so that, whenever possible, it always best matched the available PV power.

I think, for reasons of isolation and safety, you would need to switch using power relays or contactors, I do not think electronic switches (triacs, power FETs) would be acceptable.

The system in question has two associated contracts, one for each meter where the contracted power consumption would have to be twice the installed power in PV. Portuguese laws …

Thank you for the tips.