Hello,
This is a problem I brought up several years ago and thought we had solved. I have attached a file of my system and a graph showing what happens.

My emonTX3 shuts down several times a week and needs to be rebooted. The RPI running emonCMS is unaffected and keeps receiving data from my weewx weather station and my emonTH. Never had a problem with this.

To restart the emonTX, I have to power cycle both the AC and DC supplies at the same time–one at a time doesn’t work for some reason. The jumper which separates the two supplies is still in place and I have not updated the emonTX since purchased in 2017.

The fix recommended earlier (by Robert, I think) was to add the DC supply to the emonTX. At the time I was having to reboot almost weekly. This greatly improved the situation and my reboots were needed only every couple of months. The system has been running fine like this for several years. Now, for the past few weeks, I have to reboot almost every day and have changed nothing that I can see might cause this. As you see in the graph, the voltage fluctuates as low as 113 volts at times but this doesn’t seem to cause a problem. The straight lines in two places on the graph show two of the recent reboots.

The emonTX communicates with the RPI via RF, although they are only several feet apart, separated by a closet wall. This has been working fine.

I haven’t tried to upgrade the emonTX to the latest firmware because I don’t like having to unplug the high amp sensors on the mains. Not sure if that would fix the problem anyway.

If anyone can help with this I would appreciate some ideas. I have a working knowledge of Linux but am not a programmer or engineer.

I’m hoping this .pdf attachment came through correctly. If not please let me know and I’ll try something else.

Yes, its OK. And yes, I think it was me who suggested the d.c. supply.

I have to power cycle both the AC and DC supplies at the same time–one at a time doesn’t work for some reason. The jumper which separates the two supplies is still in place

I think the reason for the first is the second - with the jumper in place, the emonTx gets its power from both. I think removing the jumper might change that behaviour - though when testing, I leave the jumper on when power comes from the programmer.

The prime suspect still seems to be the power. Do you have a “power conditioned” extension that you could plug the 5 V adapter into - or if it’s just a surge suppressor and/or a filter, both adapters? I’ve done some pretty bad things to an emonTx, the nearest I get to your problem is a re-boot when I switch my Variac off - plugged into the same extension lead.

But I won’t dismiss a dry joint. It’s

Now, for the past few weeks,

that’s sending my thoughts in that direction. Where is the emonTx located - is it clean and dry, or could its location be conducive to corrosion? Does the ambient temperature fluctuate a lot?

I don’t like having to unplug the high amp sensors on the mains. Not sure if that would fix the problem anyway.

I think it wouldn’t help, the c.t’s will be OK if they have an internal burden, they should be OK IF they have protective zener diodes fitted internally (even then, I wouldn’t trust that), but if they have neither, you must isolate the circuits and then short the c.t. leads before re-energising the circuits.

Thanks for the reply, Robert. I have connected everything to an APC UPS which is both surge protector and battery backup. I’m hoping that it has some line conditioning features although I’m not sure. It’s possible the AC/AC transformer is faulty but I don’t have a substitute to try. I’m using an Apple 2.5 amp transformer with a ferrite core on the lead for DC power. I’ll let you know how it goes.
Cheers
Bob

Forgot to mention that the environment is fine, inside a utility room.

Don’t expect to measure the line voltage on the output side of a UPS! But a filter/surge suppressor on its own without the ‘uninterruptible’ bit would be OK.

If the UPS appears to clear the problem, you should remove the link (JP2, next to where the battery holder fits right on the edge of the pcb) and put the a.c. adapter back where it can measure the true mains voltage - ideally filtered and protected against spikes, but not on a constant voltage.

I don’t think I agree with the faulty 9 V a.c; with a 5 V d.c. supply powering the emonTx, you’d see the voltage & power fall to zero when it failed, but the emonTx would continue working - typically measuring a volt or two maximum of pickup and noise.

If the fault continues, we’ll see what the shop thinks.

Robert,
A progress report. I have both the AC and DC supplies connected through a line conditioner/surge protector and things have been steady for 5 days. See attached graph: 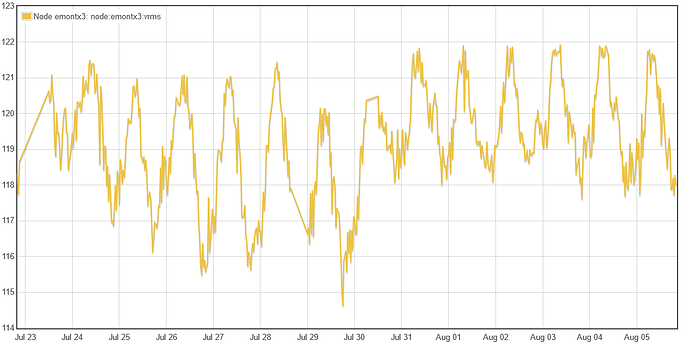 The conditioner ( Furman Power Conditioner Strip SS6B) seems to have cleaned things up somewhat. I’m not sure if I need to calculate a revised scale factor for the transformer. With my Fluke meter, I got a difference of about 0.5 volts AC between the line reading (on the conditioner) and vrms on the emontx3.

I have not removed the jumper between the AC and DC yet as I didn’t want to test too many variables at one time.

Thanks again for your help.
Cheers,
Bob

If it’s gone from daily resets to 5 or 6 days without a problem, things are looking hopeful, but I won’t cheer too loudly just yet. I think I’d blame the neighbours who share a final transformer with you - it’s quite possible they’ve got a new appliance that’s faulty (or just plain poor quality) or an old appliance that’s developed a fault, and it’s injecting spikes into your supply.

A similar thing happened to a friend here in the UK - his neighbour was a working dairy farm, and the new milking machine blew up a TV, a powerline Ethernet extender and another neighbour’s central heating controller.

Robert,
Crossing my fingers on this one didn’t seem to work. It made it ok for a week and then went down twice today and I had to cycle the power to get it back online. I guess the next thing to try is to remove jumper JP2 to split the AC and DC supplies (unless you have another suggestion).
I have attached some information on the SCT032R transformers I have clamped around the 240v mains (2 x 120)
SCT023R-200A-50mA.pdf (5.2 MB)
As best I can tell, there are no resistors or zener diodes in the circuit.
If I unplug the two leads (power1 & power2) and isolate them from themselves and everything else, can I just replug them into the emonTX3 (with JP2 then removed) while they remain in place around the two 120v mains? What I’m trying to do is avoid unclamping/reclamping the SCT023Rs to complete this process. In an earlier post you mention: " you must isolate the circuits and then short the c.t. leads before re-energising the circuits." Just trying to make sure I understand this.
Sorry to ask for so many details but I’m really nervous about putting my hands in the mains box.
Thanks for your continued help.
Bob

As best I can tell, there are no resistors or zener diodes in the circuit.

I think you are right, YHDC normally show those on the diagram if they are there - and there is nothing shown. It’s best to assume, unless you know otherwise, that there’s no protection, and you must NOT have the c.t. without a burden, or without short-circuiting it, on a cable that is carrying a current.

NO, you must not do that. That’s where it can get dangerous.

I appreciate you don’t want to put your hands in, so you need to either turn off the main breaker, or turn everything else off, and only then can you unplug the c.t(s). Then short-circuit the c.t. - join the white and black wires together. It is perfectly safe to do that, the danger comes when the c.t. is not connected to itself or anything else - you can get a dangerous voltage and it might “flash over” and destroy the c.t. Only then can you turn everything back on.

To reconnect the c.t., you need to repeat the process : turn off, remove the short-circuit and reconnect, turn back on.

Thanks, Robert. Sadly, because of my breaker box setup, I had to connect the c.t.s before the whole-house shutoff so turning everything off still leaves mains voltage on the c.t.s, no power draw but full voltage. Shutoff at the meter is sealed by the power company.
My wife asks if it’s really a problem to reset the emonTX from time to time…? She may be right.
We often have power outages from storms so I can have everything ready to go in case the lights go out this summer… just kidding.
I’ll think of something.
Cheers,
Bob

turning everything off still leaves mains voltage on the c.t.s, no power draw

That’s exactly what you need - no current flowing, no power. Remember, they are CURRENT transformers - they are totally indifferent to the voltage of the conductor (so long as the insulation is good enough), they only see current.

Ah, I thought about that but was hesitant to ask a stupid question… There is now light at the end of the tunnel, however, it will most likely be my wife holding a flashlight while I poke about for JP2. Much appreciated and I’ll let you know the results.

JP2 is right on the edge of the PCB, on the edge between the screw terminals and the USB power socket.

but was hesitant to ask a stupid question…

The stupid question is the one where you assume I know what’s in your head, without you telling me…
At which point I get the “Mindreader” image out.

Ok, the deed is done. JP2 has been removed. EmonTX3 restarted with a solid red and 10 flashes as before. It had stopped a couple of times since my last post so we’ll see what happens now. If it continues to stop then maybe I’ll need to order another emonTX3. Searching for a cold solder joint would be more time consuming than it’s worth. Continued thanks for the help and patience!
Bob

As you’ve posted again, I presume you survived the ordeal?

I won’t exclude a dry joint, but I put it well down the list. I still think a power disturbance is the most likely, and opening up the jumper removes the a.c. adapter from the power supply to the processor, while still leaving it available to the input circuits to measure your line voltage.

We shall have to wait and see.

Robert,
Close to a week now and no lockups on the emonTX3. Longer needed to be sure but I’m optimistic. Again, much appreciated!
Cheers
Bob