I have recently setup my emonTx. I have about a week of good data and suddenly it has stopped transmitting ( or maybe emonPi has stopped receiving). The indicator led appears to be doing the right things but my emonPi is not receiving any data.
The emonTX is located in a steel fuse box on the outside of my house and it was 42deg C today.
Any ideas what may have gone wrong and how to fix it? 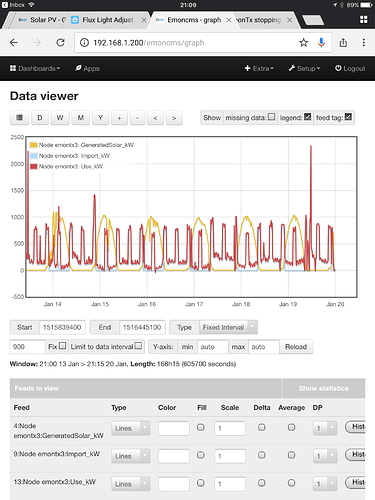 Inside a steel box is not a good idea to start with, because although theory says some signal should get out, the signal strength will be severely limited.

Then, what was the temperature inside the box? The emonTx is only rated up to 40 °C as the recommended maximum, so I think the immediate fix will be to keep the box as cool as possible, definitely add some ventilation if you can. Fuses & circuit breakers do give off some heat, as does the emonTx and its power supply.

Long-term, is it possible to move the emonTx inside and take the cables through into the fuse box on the outside?

Hi Robert.
I have had reasonable connection to the base unit in the past.
there isn’t much opportunity to move the unit. the fuse box is on the outside of the house. it gets the morning sun. the emontx failed at around 11am.
there is other electronics in the box (e.g… smart meter) which has been in the same location for 7 years without a problem. I also had a energy (Efergy) transmitter in there for a few years before upgrading to the Emontx.
It only gets to 40deg here for ~10 days a year. I don’t have a temperature monitor in the box but I will put one in if I can get it working again.

Hi, Being in Skip land too with our fuseboxes outside, I fixed a large plastic box next to the existing fusebox. We had 42.2 on one day and all worked OK. Plenty of room inside it even with an emontx and a Uno with a shield. Have you tried to communicate with the unit using the Arduino IDE and a ftdi module. I,m thinking either the chip has lost its program or the wireless module is knackered. If you can talk to it and see data then at least you know the chip is ok, theres not much in them to go wrong really apart from the programable chip and the Radio module.

or the wireless module is knackered

… or has drifted off frequency. Both the processor and the radio module have a working temperature range that extends up to 85 °C, so unless the temperature inside the box has reached that, there should not be a problem.