I’ve recently added two RJ45 breakout boards to the emonTx units I’ve had for nearly three years in order to monitor various temperatures on my new heatpump for installation.

Three sensors on each with cables not much more than 1m connecting the breakouts to the main units.

All the kit is from our hosts apart from the Cat5e cables.

I’m finding that all the sensors are missing data, sometimes for a full hour. Sometimes the missing data overlaps with one of the other two sensors, sometimes not. No obvious pattern I can see.

Done some research on the forum and maybe two possible solutions? Use 5V DC as well as the supplied AC/AC adaptors and/or upgrade the firmware (as the latest alludes to some temp sensor issue).

I haven’t tried either yet as as I don’t have a decent spare 5V supply and I’m not sure I can use the programmer bought here (which I use for the OpenEVSE firmware via a Windows laptop) to update the emonTx.

I suggest adding a 5 V USB power supply first. The power available from the a.c. adapter is deliberately limited because it distorts the wave you’re trying to measure for the a.c. voltage and power, and it isn’t designed to handle that many temperature sensors.

I’ve only got three temperature sensors on each emomTx which I thought was supported but I’m guessing it might be marginal. I’ve found a pi power supply in the box of bits so I’ll try and use that.

Do I also have to do something with a jumper inside the unit if I add the 5V DC? I really don’t want to lose continuous monitoring either if that’s a side effect.

Do I also have to do something with a jumper inside the unit if I add the 5V DC?

Yes, you ought to remove the jumper so that the a.c. adapter no longer feeds power to the emonTx.

Three temperature sensors should be OK (I read it as you had 3 on each breakout board on one emonTx, which is asking for trouble). What I’d expect to see if it is a loading issue is the emonTx rebooting when the mains dips. If there’s no evidence of that, then I think you might be looking for an iffy connection in the One-wire department.

Can you clarify that with a little more information? All at the same time, or all from time to time but not all together, or what? What do you mean by ‘overlaps’?

Below are screenshots of the three probes on one emonTx for the last 24 hours with both interpolated and without the missing data.

I’ve also uploaded the same for one of the CTs on the unit - my house load. That has very few missing data points. 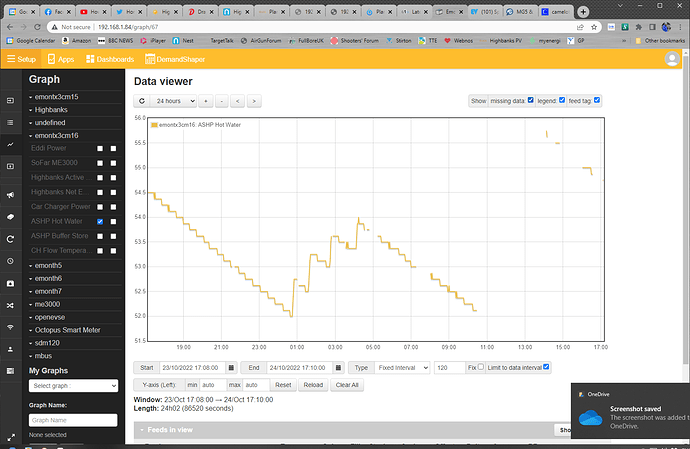 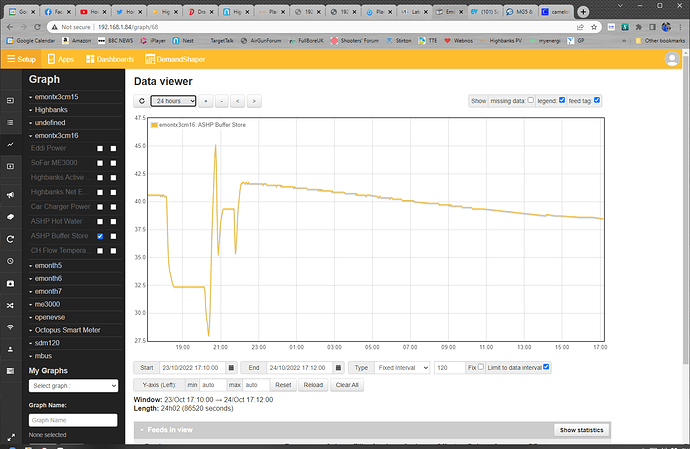 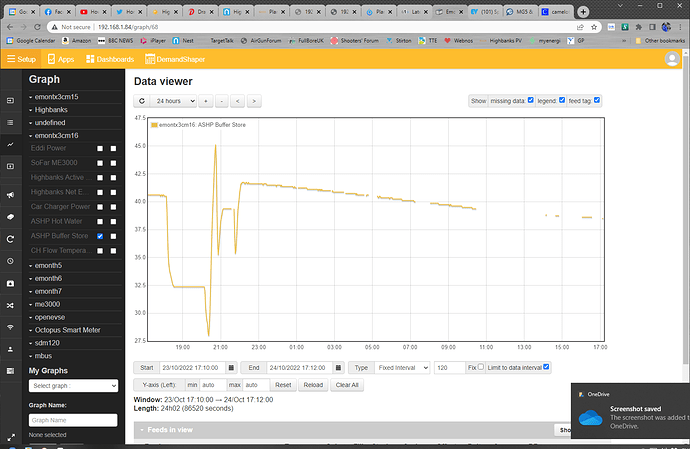 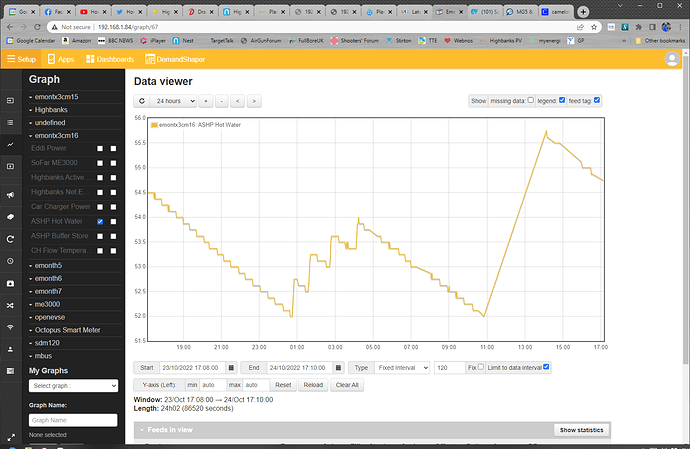 and the others - five file upload limit! 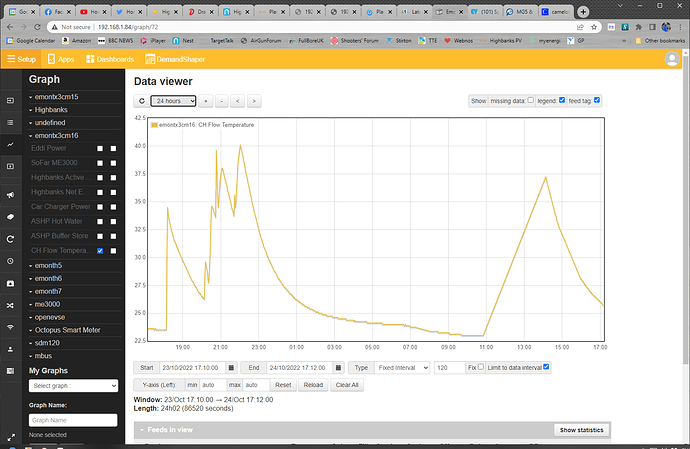 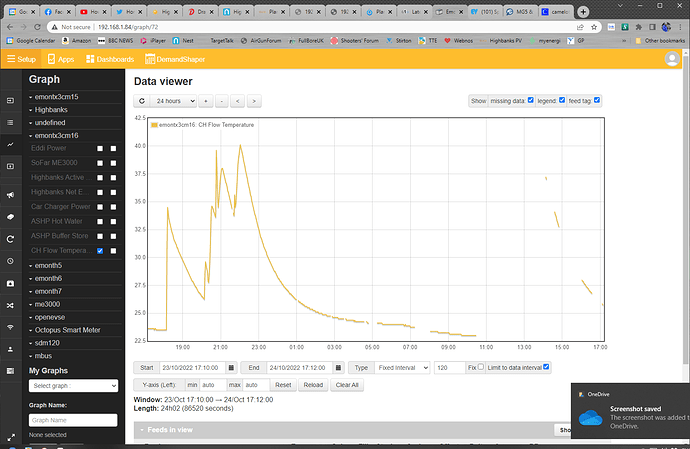 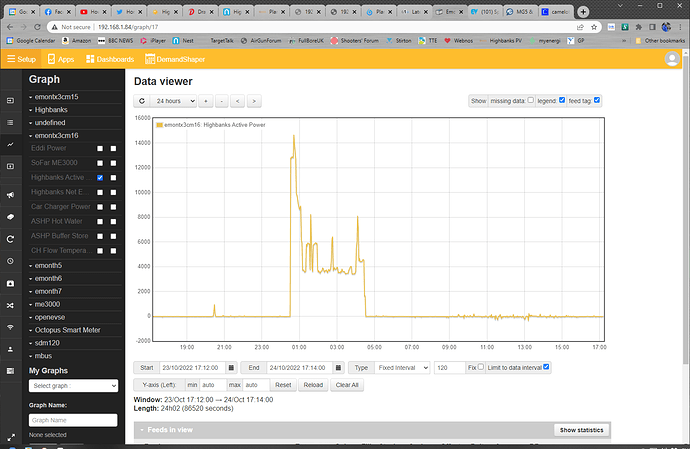 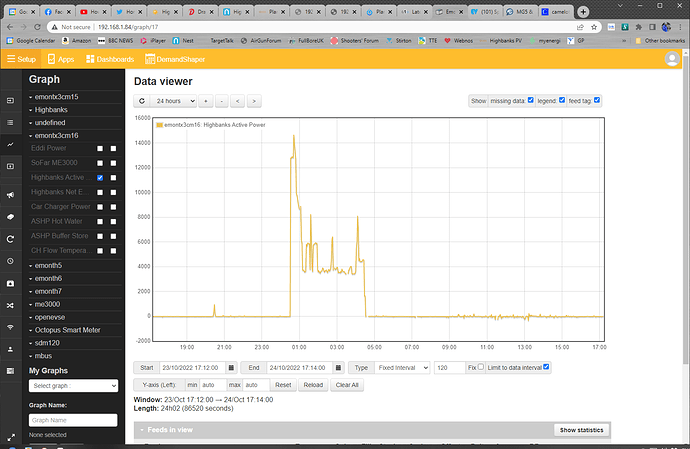 With separate screenshots for each sensor, it’s hard to see whether the breaks line up exactly, but it does look as if they do. In that case, and as the power fails to show missing values, I think you need to be checking the One-wire bus wiring. My thinking is it’s either a break before the star point where the individual cables come together, or a short anywhere that will disable all the sensors together, or it could be a massive burst of interference that’s wiping out the data on the bus.

So what exactly do you have? Presumably a short Ethernet patch cable from the emonTx to a breakout board - is that the multiple RJ45 sockets sort or terminal blocks? Are all plugs/sockets clean? If you’re using screw terminals, have you clamped onto the insulation by any chance? If you use only a single sensor at a time, is the problem still present?

Do the sensor cables run close to any possible source of interference, or close to power cables that could be carrying and radiating interference?

The end cause was that I’d mistakenly set the feeds up with 5s as the interval.

Deleting the feeds and recreating with 10s has bumped up the quality to close to 100%.

So you had a NULL for every alternate value - and if the graph scaling was such that it picked all the null values for a while, but all the good values either side, you thought all the data was missing…

No, that wasn’t the case.

Click on ‘Missing Data’ and chunks of hours were gone, not small intervals.

Did you expand the graph to show individual values?