I know there are articles on here about emonTx and missing data and I’ve look and tried various things, but I think I have run out of options, and in desperation, I am wondering if there is anything I could be doing wrong as I still have an awful lot of missing data from my Tx. Last 24 hours attached, oddly P3 seems to lose a lot more than P1. I used to have them about 10 meters apart, in a detached garage, the RSSI was around -75 at that time. I tried moving the devices (emonPi and Tx) around, having a metallic sheet underneath, all sorts, no joy, so I bought the Tx in to the house, they are now in the same room, and RSSI is between -28 and -30, and the same amount of missing data continues.

The emonPi and Tx were bought at the same time, all standard. I feel I’ll have to get them wired directly over USB to serial, but I just didnt expect to have to do that, or have this much missing data, or am I expecting too much?

Is there anything else I could try? 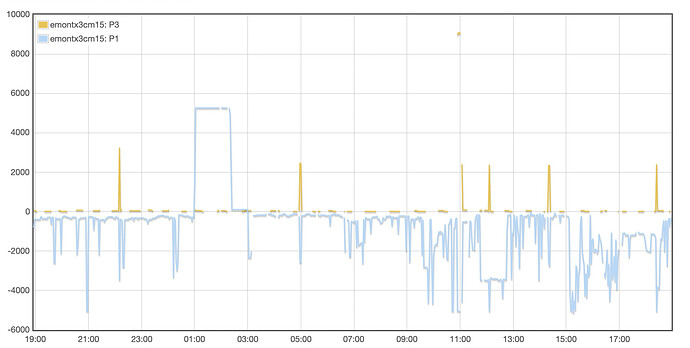 That’s certainly not right. Are you using just P1 & P3 from the emonTx?

Here are some things to check:

Have you chosen the correct Feed interval in emonCMS? If you are trying to save the data faster than it’s coming in from your emonTx, then (if you’re using the PHPFINA database - Trystan’s renamed it in the latest version, but it’s something like that), you will have holes and missing data. The explanation is: think of the database as empty boxes on a conveyor. If the boxes go past faster than the data falls into them, some will go past without being filled.

And if that’s the case, the graph doesn’t pick the nearest point with data if it lands on a null value - and if the next point it wants to pick to draw a line to is also a null value, then you have a gap in the graph, even if there was good data all around.

Is there something else within radio range that’s interfering with the radio? The usual suspects are remote controls of any sort (except infra-red of course), burglar or car alarms, garage door openers, remote doorbells, etc. If there’s a frequency mentioned, and it’s 433 or 434 MHz, you have a possible suspect. It need not be in your house - it could be a neighbour or anywhere within say 100 metres - or even more if it’s relatively high power device.

Are there any clues in the emonHub log? You will need the logging level set to “DEBUG”. A transmission with a bad checksum will have a question mark preceding it. A good message looks like this:

Many thanks for the quick reply, I’ll have a check of what you’ve recommended, thank you.