However, in weeks of testing, I realise that the second byte of the humidity from my emonTH is always 1, the humidity is always nn.1% - obviously wrong.

Could someone point me to the definitive words - thanks.

Up to now, I’ve been feeding the temperature alone into an rrdtool database and producing graphs, from a Raspberry Pi, glued together with my first stab at Python. It seems to work prettily, so it would be useful to sort humidity (and probably battery and signal strength). Next may well be central heating boiler control.

You’ll really need to know which sketch is in your emonTH. Because it is sending 12 bytes, I suspect it will be “emonTH_DHT22_DS18B20_RFM69CW_Pulse.ino” (still available in GitHub).

The data structure is

Not shown here is the NodeID, which is 1 byte. It is injected by JeeLib as part of the message header and precedes the data struct.

The integers are 2 bytes, signed, low byte first.
The long is 4 bytes, so your “dunno” is the high 2 bytes of the pulse count.
Temperatures are sent in deci-degrees (i.e. degrees ×10).
Humidity is sent as percent ×10.
Battery voltage is sent in deci-volts (i.e. V ×10).

The signal strength of course doesn’t form part of the transmission itself, it comes from the RFM69CW receiver.

The pseudo-code for extracting the signed integer data (courtesy of Paul Burnell) is:

One point; in the real world, is there any purpose to the pseudo-code ? (2^15) is 32k, far bigger than any parameter than could be returned by a domestic emonTH. I’ve currently updated my Python to the info in your post, less this >32k check, which appears to save RPi oomph.

What about temperatures below zero?

Not many of those in my house, I’m pleased to say. Having said that, I see I created the rrdtool database with a minimum of -10ºC, although the minimum I have seen is 8ºC. Well, easy enough to code the check.

It could be a different story if/when you add an external temperature sensor, and then it would be head-scratching time again.

OK I added the code yesterday and it seems to be producing graphs as expected. For that extra fun, I’ve now ordered an external temperature sensor but… how should it be connected ? The jpg above here is missing for the DS18B20.

I’ve also looked at the GitHub “sketch” to little understanding as GitHub is code - or perhaps “sketch” means code - and I’m not clear how to identify my emonTH anyway. Perhaps I need to examine the board of the emonTH more carefully.

Yes, “sketch” is Arduino-speak for the application that runs inside the processor (remember there’s its own operating system of sorts inside there as well).

You’ll find the hardware version printed on the circuit board. To find the software version, you need a ‘programmer’ and you may need to solder in a 6-pin header to connect it. Then load the Arduino IDE and watch to see what it puts on the screen as it starts up. Unless you have everything set up, that’s not trivial.

The external DS18B20 sensor is a One-wire device, it needs GND, 3.3 V (or switched power) and the One-wire data line. Those are all available in the terminal block. OpenEnergyMonitor Wiki - check your hardware version.

[I’ll get the missing photo chased down.]

OK, my DS18B20 has arrived, that missing photo has re-appeared (thanks to the recoverer/s), so I’m ready to connect and re-tweak my graphing software.

Lurking in the vastnesses of the net, I have recovered my own February photo of my device 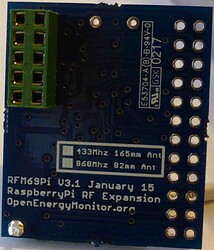 emonTH.jpg1708×1995 150 KB
although I don’t think that tells me anything about the data format (sketch). A work in progress for me.

I’m impressed overall, to such an extent that as well as conducting a reliability run on the emonTH, I’ve ordered a JeeLink with the intent of hacking into my central heating controller’s 433 link and boiler switching with the emonTH (+ Python). Approval has already been obtained from Mrs Chiny

Suggestion: the emonTH box would be improved by 2 keyhole-shaped mounting holes.

That photo isn’t an emonTH. As it says, it’s an RFM69Pi - the radio receiver module that piggy-backs on a Raspberry Pi.