Hi,
My EmonEVSE has been working well for a year in Eco mode, but in the last couple of days, it is sending about 1kW too much power to the car.

Looking at my chargepoint’s OpenEVSE webpages, I see the MQTT setup still being as I expect, and my MQTT topic is being sent from my emonPi without problems.

I would expect these amperages to be about 4A smaller, and historically they have been.

I have tried repowering the emonPi and the emonEVSE, and changing and resaving the MQTT settings in OpenEVSE, with no improvement.

Can someone suggest a next step please.
Many thanks, David.

For the time being, I’m trying a fudged fix by putting a calibration offset in the emonPi MQTT, subtracting 1,000 watts before sending the topic to the emonEVSE.
When charging in Eco mode this is effective in holding my grid CT at around 0 watts (where recently it has been around 1,000w).
But this has the effect of making the emonEVSE readings look wrong, and may have introduced who knows whatever instabilities.

Been looking at this and yes there does look to be an issue with the conversion between watts and amps I will do some investigation.

Thanks Jeremy,
I wonder if its simply that the software in my unit has become corrupted. The unit has been working fine for a year, but since the last few days it’s all squiffy.
I noticed the other day that the elapsed time during the current charge session was about an hour too large, but yesterday the elapsed time was stuck at zero throughout the session.
And my attempt to offset my “SurplusToEVSE” MQTT topic by subtracting 1000 watts doesn’t seem to work. Here’s my graph from yesterday. Notice how the EVSE is very nearly working - it resonds to the increase in domestic loads at 10am, but fails to track the available surplus. I expect the EVSE to track the solar curve, but below the solar by the amount of the blue domestic loads - My MQTT topic to the EVSE is “solar minus domestic minus 100”… 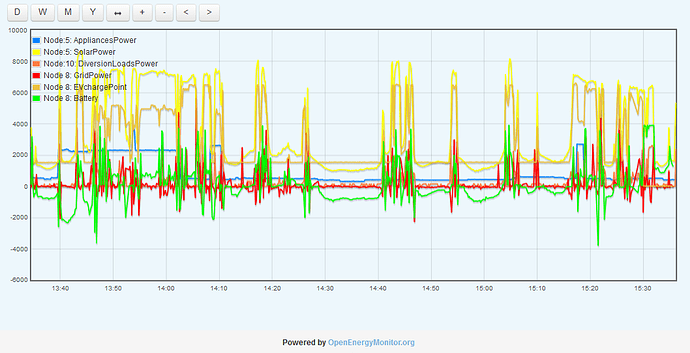 So, because this looks like a recent “crash” I’m wondering if I should just reload the software in the emonEVSE and see if that fixes things. Are instructions for doing that posted on the site somewhere?
Many thanks, David.

I will double check again tonight but I was able to reproduce locally, so don’t think it is specifically your setup.

Hi Jeremy. I may have found a fix today

My rig is still playing up, but we have learned to live with each other

The current behaviour is:-

So, this is the position. All is workable, but I’m wondering what to change to make the MQTT connection more permanent so I don’t have to go through this reset each time I want to use the EVSE.

The version could be an issue, that is pretty old.

If you do decide to update, the route to take is to get a new card, flash a new image and import the data via the USB method (all in the docs). This preserves the old card as a roll back option.

We are currently working on a significant update to the OpenEVSE solar PV divert. This update will be available as an OTA update for existing OpenEVSE’s