Calculating & displaying % of an input (or feed) equals a specific value over a time period e.g. 24hrs

I have an input which represents the state of my central heating thermostat. It has a number of different values relating to the ambient temperature, but the main ones of interest for this question are 0=“heating off” and 1=“heating on”.

What I would like to do is have a text box on my dashboard that shows what % during the current day that this value has been 1.
E.g. if the heating has been on for 60 minutes, it would show 4.2% (1hr out of 24hrs).

Along similar lines (and possibly more meaningful), a text box that would say 60min in this example would be good also.

Note this may not be a single 60 minute period of heating - more likely several shorter periods throughout the day. It is just the daily total i’m looking for.

This data can then be logged, and compared week-to-week, or even year-year etc.

So, I know I have the Input/Feed with the values.
(If necessary I can manipulate my script that sends the data into EmonCMS to have a separate input that is only 1 or 0, and sends 0’s instead of the other values (4,5,6,7 in my setup) if that simplifies the solution things further.)

What should I be looking at to create/edit functionality to generate the stats i’m looking for?
I’m comfortable to tinker with code if needed, so i’m not necessarily asking for a ready-to-go answer, unless it is really simple and i’m missing something obvious of course!

I’ve not used it, but there is a choice on the process list setup page pull-down menu named input on-time that should enable you to make that calculation. 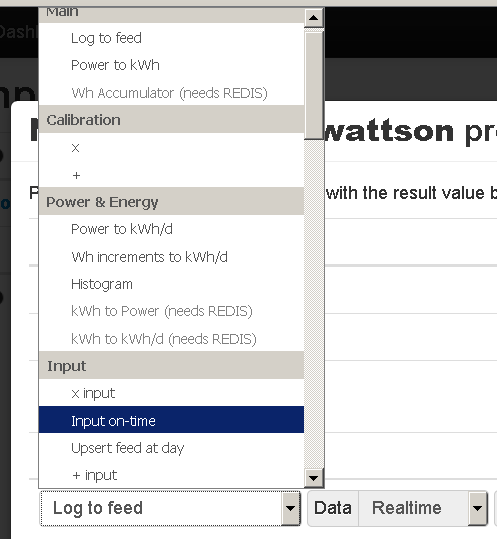 When slected, the caption box reads:
Counts the amount of time that an input is high in each day and logs the result to a feed. Created for counting the number of hours a solar hot water pump is on each day

Hi Bill. Somehow I hadn’t seen that before. I will give that a try.

So, I edited my input to create the following feeds

Then created a Virtual Feed to sum those together, then finally a bit of math to give the Feed in minutes rather than seconds.

It took a few days to be sure it was working properly when displayed as a graph, but I think it is.

Thanks for the pointers.

Update: The above is working, however now and then I seem to get a number carrying over instead of resetting to 0 at midnight.

I think this relates to when there are days when the status never meets the criteria (ie state=1 or state=5 in my case). When this happens i get a random 0.83 figure the following day (which is 50 seconds represented in minutes).

I am looking into sending a 0 to a separate input at midnight via a cron job, then having that input ‘log to feed’ to overwrite whatever figure remains - i.e. to semi-manually reset it to 0.