Recently, as a simple project for myself, I tried to build my own energy monitor and it didn’t work out as well as I had hoped. (I wont go into details). however, I really want a whole house energy monitor with the eventual goal of providing power usage trending of customizable specific time periods.

So looking around I found this group. After some time looking at the products here at OEM, I’m considering purchasing one of these emonPI energy monitors. However I have some concerns that I need validated or corrected and I just need general advice before I fork out my cash.

My power box looks like this and you can see my pi project with a daughter board that is hosting 2x CT sensors (Plan is to replace the current pi with an emonPI): 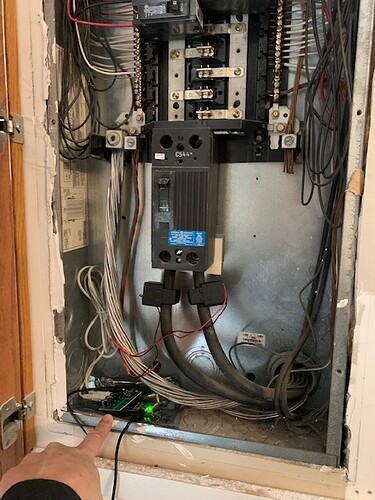 The CT sensors I purchased were these because they fit (snug) on my cable diameter:

Doing a little research, I was reading this article about suitable transformers and couldn’t find one that matched the specs of my CT:
Edit: as a new user I cannot post more that 2 url links, but there is an article on this site about suitable current transforms that is very technical:

I would like to avoid buying new CTs, if possible but will do so if I have to.
So my questions,

Welcome, Dale, to the OEM forum.

as a new user I cannot post more that 2 url links,

That’s not true any more - I’ve bumped your privileges up a notch.

Will my current CTs work with the emonPI? And if not, can anyone make a recommendation on a set of CTs that will work on my cable diameter and help me achieve a setup where Im trying to measure whole house power.

Yes they will, but you’ll have to change the burden resistor inside the emonPi - or add another externally. All you need is another 22 Ω in parallel with the one that’s fitted. If you’ve already built your own energy monitor, that shouldn’t present a problem. Doing that modification means you won’t need to change the calibration in the software. (And if you don’t do it, you’ll only be able to read up to 50 A on each leg of your supply.)

Do you intend to put the emonPi in there? Two possible problems: is there room for two 120 V sockets - one for the emonPi’s power supply and one for an a.c. adapter to measure a sample of the line voltage? and second, is there a way for the Wi-Fi to get out, i.e. is the door wood, or is there a metal cover you’ve removed that will pretty much keep it in? - the alternative to that is an Ethernet cable to your router.

Thanks for the quick response Robert.

Firstly, with regard to the parallel resistance. Is there any documentation you can link to me on replacing the burden resistor inside the emonPI or how you go about installing an external resister. I actually dont have any external resister installed on my current setup. So not sure how to do this.

To answer your questions, yes there is room, I have a small gap at the bottom of the switch board where cables can access the 120v sockets on the wall. One for the pi and one for the sample line. Its how I have my current pi setup.

The switchboard is very close to one of my ceiling mounted APs for wireless ethernet, signal is very good. Works just fine with my current pi on wifi, so no issues with network access or power point access.

Do you intend to put the emonPi in there?

I’m in the US too. A couple of things to be aware of…
If you want to keep your load center (breaker box) wiring code compliant, the only other items allowed inside a load center other than circuit breakers and bus bars, are CTs.

If you put the electronics in a separate enclosure, i.e. one that’s not a load center, that would keep
things in line with the code.

Firstly, with regard to the parallel resistance. Is there any documentation you can link to me on replacing the burden resistor inside the emonPI or how you go about installing an external resister.

As far as I know, there’s nothing written specifically for the emonPi. However, the “emon” part of the emonPi is a cut-down version of the emonTx, and adding a second parallel resistor to that has been written about many times.

The better, safer method is to have the parallel burden resistor external to the emonPi. Your c.t’s don’t have a protective zener diode, which means without a burden, they’re at risk of damage if unplugged while current is flowing in the cables they are clipped around. The resistor can be anywhere on the cable - where you extended the leads looks to be a good place. It is of course connected in parallel with the c.t. and the plug. (A ¼ W resistor is plenty - the power in it will be 220 mW worst case (i.e. with 100 A flowing, c.t unplugged, normal use will be 55 mW max).

If you don’t fancy doing that, and want the resistor inside, and if you do buy the assembled emonPi, you’ll first need to disassemble it. With nothing connected, take off the acrylic end (nearest the pushbutton, a T20 screwdriver is required), and slide out the display and the Pi plus the ‘emon’ part together just an inch or so, taking care not to strain the push button and display connections. If you now look down behind the two 3.5 mm sockets, you’ll see the burden resistors - the big ones labelled “22R0” - with a hole for a wire-ended resistor at each end. That’s where you solder in the second parallel 22 Ω resistors. If you’re not confident you can do that with the two parts still assembled, you’ll need to continue with the disassembly. Pull everything out of the case. Unplug the connectors to the display and pushbutton at the PCB end, noting where they went. Next, remove the three screws holding the two boards together via the spacers, then you’ll probably need a flat-bladed screwdriver to lever the connector apart to split the boards.

(Hint: With the boards separated, you can plug in a programmer and the USB power, and use the Shield like an emonTx - so you can check it works and gives the correct current/power after you’ve added the resistors.)

Reassembly is fairly straightforward - if the connector feels as if it hasn’t mated adequately, you’ll need to adjust where the extender sits between the boards. The ‘emon’ PCB only fits properly in one pair of slots, the narrowest.

Snapping a picture or two of it at that point might not be a bad idea.

@Bill.Thomson
I did not know this, Thanks for the info. I’ll just move and mount the emonPi to a small rack on the outside and below the breaker box, I have a shelf it can sit on and the low voltage wiring can be routed up into the breaker box. cheers.

@Robert.Wall
Thank you so much for the detailed description and pictures! Really appreciate the feed back and I’ll probably be attempting installing the additional 22 Ω resister internally.
To answer your questions. I after the feed back I got here, I went and purchased an emonPi and so I’ll be replacing my Pi and just reallocate it for some other project. I had fun with it it…, built a simple python script which took line reads from a daughter board on the pi and injected that data into an influx DB. I then had grafana plot the data into a graph which I would display in openHAB. But now I wanted more trending data and it looks like the emonPI has much more maturity and capabilities and so this will save me alot of time working all that out.

Bill is a big fan of Grafana - I expect he’ll comment, and tell you how to use it on your emonPi.

Hi @Robert.Wall
Finally got my emonPI in the mail.
I didnt have the resistors at the time so just set it up, as is, just to get a baseline of what the numbers would look like with an unmodified box. And I think that the emonPI is giving me some over the top numbers, which I can only assume is because I don’t have the additional load resistor installed. I’m pretty sure Im not using 12.5kw in such a small town house. So Ive now got a bunch of new resistors and I’m about to install them internally but wanted to confirm a couple of things before I break out the soldering iron.

The CTs state in their product guide (link above) that they have an internal resistance of 42 ohms. quote " Internal resistance: 42Ω "
I believe the emonPI comes with small 22 ohm resistors already installed in parallel. I can see from the pic you uploaded above.
And you’re suggesting that I need to install an additional 22 ohm resistor onto the CT lines in parallel, one for each line.

Am I correct in thinking that in order to adjust the circuit to accommodate my CTs and power environment, we are looking at 42+22+22 = 68 ohms in parallel is where I need to get to? And I think that the emonPI is giving me some over the top numbers, which I can only assume is because I don’t have the additional load resistor installed. I’m pretty sure Im not using 12.5kw in such a small town house.

That’s exactly right, and as you should have expected. Two times too much, to be precise. And your maximum current will show as 100 A, but will be only 50 A.

That’s irrelevant for the calculations, but useful to know when you’re testing for a fault.

Am I correct in thinking that in order to adjust the circuit to accommodate my CTs and power environment, we are looking at 42+22+22 = 68 ohms in parallel is where I need to get to?

Those resistors are ½ W, so they are probably too big to fit between the holes in the PCB, you’ll need to either stand them on end, or (safer - you can unplug the c.t. without risking damaging high voltages) connect them across the white and black wires from the c.t. where you’ve extended them to the jack plug.

It’s safer because a c.t. is a current source. It will try to generate whatever voltage is necessary to drive the current it wants to into the load (or burden). You can always safely short-circuit a c.t., and it’s actually then working under no load. If you leave it open-circuit, it will generate a high voltage trying to force a current that can’t flow, and may well damage the insulation inside and destroy itself. If it doesn’t damage itself, it will probably need demagnetising to restore accuracy.

Homework question: With the resistor fitted and plugged in, what resistance do you expect to see measured between the black and white wires? What about when it’s unplugged from the emonPi? (The correct answer depends on where you add the resistor - in the emonPi or in the lead.)