Hi
I realy hope someone can help. We had a Grant ASHP fitted in November and we’re really struggling with it. We had TADO SRV fitted which work sometimes (they dont register the room temp properly but hopefully weve fixed that issue), sometime sthey just lose connection - .
We’ve had conflicting advice about how to run the pump:

Hi @Charlie27 and welcome. I’ll tell you what I think I know but I’m pretty new to this myself and have different hardware (an Ecodan with dumb TRVs) so hopefully someone who knows Grant ASHP will be along soon.

£20/day sounds very high, even for the coldest part of winter, but might not be if your house is huge, underinsulated or leaks like a sieve. What Grant do you have, how big (kW) and what did your Energy Performance Certificate say you needed for heating? What monitoring do you have? Can you get EmonCMS up and running to see what the heck’s going on? Can the SRVs give useful feedback?

Running through your advice bullet points in reverse:

I’d definitely not have it on high in rooms you don’t use at all. We’ve got two rarely-used-in-winter rooms here set to about 13 degrees on the radiator valves. Doors shut, of course, else they will just take heat from other areas. Rooms we use are mostly 19-20 degrees (more on this later). Just allow a few hours to heat the rooms up before you are going to use them. The days of inefficient blazing-hot radiators heating a room up from frost-guard in an hour in winter are gone (well, you could force it but I shudder to think what it would cost).

Conventional advice is to leave it on all day and night, but I agree with @MyForest and have ours switch off sometimes. I’m not as sophisticated as him yet, but ours normally shuts down for the first part of the night so that the house falls silent and the circulating pump (which is indoors) doesn’t keep anyone awake — the indoor pump isn’t that noisy but I like the silent nights and it seems daft to heat the house much while no-one is up. It then comes back on 4-8am mostly taking advantage of Economy 7 (but again, conventional wisdom is ASHP users are better on flat rate… I wanted to collect data before switching, especially just now when switching away from our old tariff would mean increasing our rates to the price cap) then only an occasional hour burst (more in winter) until the late afternoon.

Our water is normally heated 5am and 7pm, plus any time the tank measures too cold while the ASHP is on or someone hits the reheat control. How often you should do yours is probably a matter of personal/family opinion. 5am/7pm is aiming to have water hot for morning washes and evening washing-up, as the ASHP’s top normal temperature seems about the average of the old fossil-heated tank.

So, finally, room temperatures. We were advised to set it at 19 and just leave it on all day but our Mitsubishi controller’s room temperature mode seems pathetic and started costing a lot of money back in Oct/Nov. So, I put it into curve mode passing through (outdoor,flow) coordinates of (-20,50),(0,42) and (18,20) and it mostly works well, keeping most of the house at around 19-20 degrees, but that’s a work in progress. I have to nudge it up slightly on windy days (one or two a week on average at the moment) and sometimes down a bit on warm evenings (not for a while!). I’m still wondering giving switching heating control to my Raspberry Pi so I can do more smart things, such as producing more heat late afternoon when it’s cheaper, but it would be issuing commands over the “melcloud” service, which I’ve not had great experiences with even their own app and our internet connection isn’t perfect either.

ASHP should make financial sense for us, as well as environmental, because we changed from oil burning, even before heating oil went over 60p/litre. My understanding was that moving from gas would be almost no change to costs, but I don’t know if the recent changes in gas and electricity prices have changed that either way… but you need to get a grip on that £20/day nonsense! Good luck!

You will get this sorted, but it might take a few weeks trying things out to get where you are happy. It took me a couple of months.

If you’ve got it keeping you warm then take that as good news and start to chip away at things. As @mjr says, your advisors are giving you reasonable advice and you’ll find what works best for you. I don’t think it’ll work at 15 though, I can’t see how that would keep you warm - maybe there’s something I can’t see.

If you’re on one of these 35p-a-unit rates at the moment it will compare very badly with gas. You’d be using about 80kWh a day for the whole house to be at 20GBP which we do some days given all the things going on in our house.

However, breaking it down (using EmonCMS) I can see we’re having good days and bad days and Saturday was a bit crazy because we used 60kWh input just for heat. In this chart you can see when is was warm around New Year we used very little - the average temperature for the day is shown on the scale on the right. 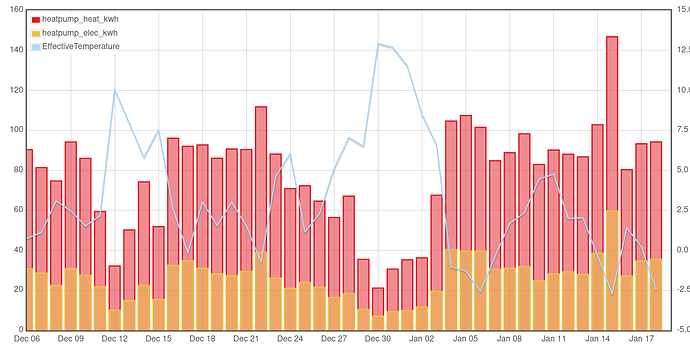 If you can find a way to see how much energy you are using it helps you work out what to do. Your Grant ASHP will probably have some screens on it showing what it’s doing each day. Of course you’ll have to decide how much you want to look into this and how much you want to do what your advisors say.

I could point you to a number of posts on here about different ways to run the heat pump, but that might be overwhelming so maybe try something for a few days and see how it goes. If you decide you’d like to dig in further you’ll find this community very helpful, I know I did.

Give us a nudge here when you’ve decided what you’d like to do.

Thanks so much for this. I revisited the daily usage figures with my husnabd (who is logging them/) and it turns out we use more like£12.50 per day so not nearly as bas as I thought. We also have an electric car which obviously takes up some usage too. We’ll monitor through out the year and hopefully the warmer months will compensate for the colder ones. Thanks for all your advice and comments.

Hi David,
Thanks for taking so much time to share this information with me. I revisited the daily usage figures with my husband (who is logging them) and it turns out we use more like £12.50 per day so not nearly as bad as I thought. We also have an electric car which obviously takes up some usage too. We’ll monitor through out the year and hopefully the warmer months will compensate for the colder ones.
I really like your suggestion to get warm and comfortable then chip away to make savings from there on. Clearly the outdoor temperature has a massive impact on running costs so I guess we can expect different costs on different days. Roll on summer ; )
Thanks for all your advice and comments.

Hi @Charlie27, on the assumption your Tado SRV are smart radiator valves, I suggest you don’t let them “call for heat”. We tried this with Hive radiator valves and it didn’t work.

We now have a Samsung heat pump and use the Hive radiator valves in bedrooms only to prevent them from getting too warm. Seems to work well.

Clearly the outdoor temperature has a massive impact on running costs so I guess we can expect different costs on different days. Roll on summer ; )

It really does make a big difference. To reinforce that graph: back in Oct/Nov, average temperatures around 11°, our heating cost £1-2/day. In December and January, averages mostly below 5°, we’ve had several days over £5. It was probably a similar variance with the oil boiler, but it was so old we didn’t know how much it was costing each day: only the averaged-out hundreds of pounds each time a tanker came to refill the tank!